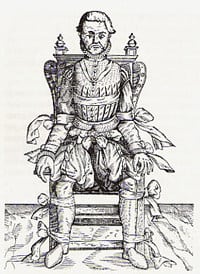 The mere thought of eye surgery without benefit of modern anesthesia is enough to evoke severe shuddering. Yet, for hundreds of years, various operations were performed on the eyes in this manner, including the removal of cataracts, the excision of styes and the complete removal of the eyeball. No clearer picture of sixteenth century ophthalmology exists than that presented in George Bartisch’s Ophthalmodouleia. This fascinating book is generally regarded as the first systematic work on any surgical specialty. Bartisch, lacking the financial resources to attend medical school, pursued a career in surgery (then a separate profession) instead. He eventually developed a substantial practice and was appointed oculist to the elector of Saxony in 1588. Tailoring his book to his fellow practitioners he wrote this important treatise in German rather than in Latin. In it, he provides detailed descriptions of eye injuries, diseases, medications, surgery, wound dressing, and appliances. Here he offers advice on preparing a patient for surgery:

…have him sit down in a special place on a stool or chair which has arm rests on both sides. Bind him with a towel around the body. Tie his arms on the rests with appropriate strips of material. Similarly tie his legs to the legs of the stool. Secure him carefully and fully in his body, arms, hands, and feet so that he can not shift, pull out, or move.

Although Bartisch showed great talent for observation and practicality, he remained a product of his age. In the passage below he offers the following advice:

Most striking, however, are the vivid woodcuts that illustrate eye anatomy as well as contemporary techniques and procedures. Some of the illustrations make use of movable flaps to assist in teaching, a novel technique at the time.

For more information about the John Martin Rare Book Room please visit the Web site at http://www.lib.uiowa.edu/hardin/rbr/ or contact Ed Holtum, Assistant Director for Administrative Services and Special Collections, at 319/335-9154 or edwin-holtum@uiowa.edu.