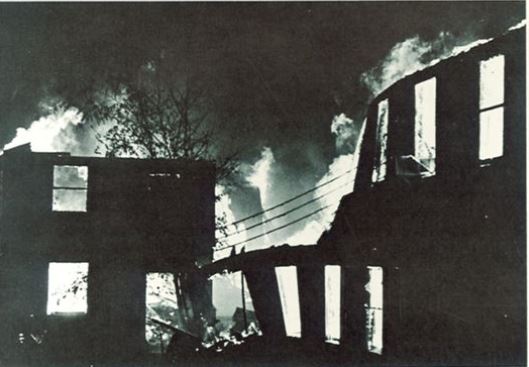 The following is written by University Archivist David McCartney

In the early morning hours of Saturday, May 9, 1970, the building housing the Dept. of Rhetoric mysteriously caught fire and was declared a total loss. Although the cause of the blaze was never determined, many to this day believe it was the work of arsonists. No one was injured. The building, Old Armory Temporary – nicknamed “Big Pink” – was a wooden frame structure situated roughly where the Adler Journalism and Mass Communication Building is now, just east of EPB and across the railroad tracks.The building’s destruction came just days after the deadly Kent State shootings in Ohio on May 4, 1970, and was emblematic of the anti-war protest movement that closed or threatened to close campuses across the U.S. that spring. While UI remained open, students were given the option to complete their semester’s work early and leave the campus, or remain on campus until semester’s end.Fast forward 51 years. In the Dept. of Special Collections & Archives, University Archives Assistant Denise Anderson is processing the Rhetoric Department’s records and recently noted a set of files that appear to have been singed on the papers’ edges. We are speculating that these records survived the 1970 fire, and were saved by Rhetoric staff.

Among the surviving records are documents concerning Paul J. Kleinberger, a graduate assistant in Rhetoric who in late 1967 had been suspended from his position by the university following his participation in the Dec. 5, 1967 Dow Chemical protest at the Iowa Memorial Union. Newspaper clippings, correspondence, and other records document this tumultuous chapter. Kleinberger was reinstated in early 1968 and continued to teach, but we don’t know what became of him; his last listing in the student directory is in the 1967-68 edition.Mr. Kleinberger’s letter to the dean of the College of Liberal Arts, Dewey Stuit, dated February 4, 1968, is his appeal to be reinstated. Also included here are a January 1968 article appearing in the Iowa City Press-Citizen, reporting his plan to appeal, and a portion of the Dept. of Rhetoric newsletter, dated November 9, 1967, about a month before the Kleinberger controversy unfolded.