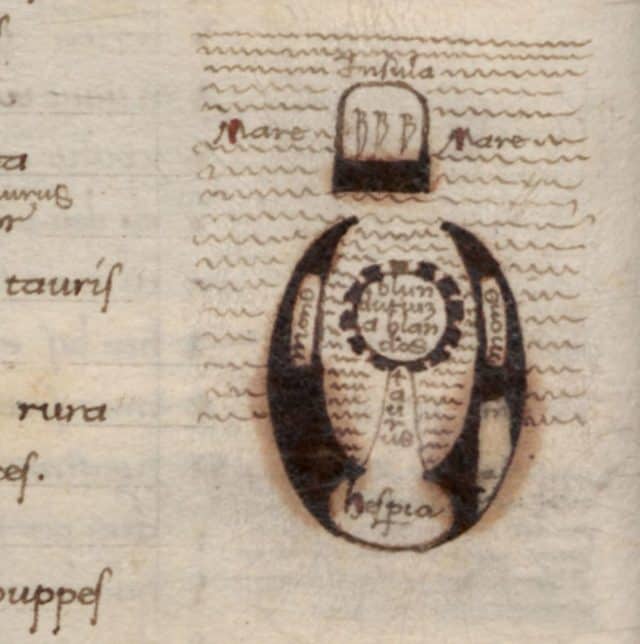 “From the Classroom” is a series that features some of the great work and research from students who visit our collections. Below is a blog by Laura Moser from Dr. Jennifer Burek Pierce’s class “History of Readers and Reading” (SLIS:5600:0001).

Read Behind the Lines: Recovering Deleted Verses in a 15th-century Manuscript

Some may know Latin as a “dead language,” but here in Special Collections & Archives it is still very much alive. It lives not only in ancient literature preserved by manuscripts and printed books, but also in centuries-old notes scribbled in their margins by past readers. A few Latin words penned in the back of a book, like that of a 15th-century Latin manuscript of Lucan’s Pharsalia (xMMs. Hi1), can open up a whole new story about an object.

A history written in verse,  Pharsalia narrates the civil war led by Julius Caesar against the Roman Republic in 49-45 BCE. As an epic poem, its literary predecessors include the works of Homer and Virgil, but its focus on historical events and grim pessimism about human nature set it apart from other poetic works at this time. Thue author, Marcus Annaeus Lucanus (better known as Lucan today), was just 26 years old when he fell out of emperor Nero’s favor and was sentenced to death in 65 AD, before the poem was finished.

Perhaps it was this grisly history that drew a young Italian schoolboy named Tommaso Baldinotti, fourteen hundred years later, to undertake the task of copying the poem. In addition to the poem, Tommaso included in the margins a detailed commentary on the text, interlinear vocabulary notes, and two hand-drawn maps depicting scenes in the narrative (see Figs. 1 and 2). Though Tommaso’s copy of Pharsalia is far from the only surviving copy of this poem, his edition offers unique insight into the reception of Latin literature and educational practices in Italy during this time period, when copying texts by hand was a crucial part of education in Latin. It is also a work of visual beauty; neatly written in humanist miniscule, the pages show careful planning and attention to detail, with a richly decorated initial marking the beginning of each of the poem’s ten sections (see Fig. 3).

But just as interesting as what was put into this book is what was removed from it—not in edits to the poem itself, but in four lines added at the end that were carefully crossed out in black ink (see Fig. 4). An occasional error in a handwritten manuscript is to be expected (as anyone who still writes by hand can attest!), but the removal of entire lines after the end of the poem is more puzzling: what had our scribe written and why was it taken out? Did the same hand write and remove these words, or was it a later reader who wished to exclude them?

Luckily, with the careful eyes of a scholar and some help from digital technology has gotten us closer to answering these questions. Classical scholar and digital humanist Samuel J. Huskey, who has worked extensively with this manuscript, observed that the final page of the manuscript was unusual in that it held more than one “colophon,” which refers in manuscripts to the brief statement (usually found at the end of a book) that records the scribe’s name and the date of the work’s completion, often among other details. In this Pharsalia, we find three such colophons. The first, following directly after the word FINIS (Latin for “the end”) in a recognizably similar color and style of handwriting, is just a single line of Latin: Hoc scripsi totum pro p[o]ena da mihi potus, which translates to something like, “I wrote all this; give me a drink for my trouble.”

The lines that follow look to have been written in the same hand and shade of red, but are obscured by two heavy lines of black ink, a clearly deliberate attempt to make the underlying text illegible. Beyond making out a few letters here and there, deciphering these lost lines might have seemed a hopeless task. That is, until Huskey was inspired to try and recover them through some unusual means; he enlisted the help of a local Criminalistics Lab, where they were able to produce infrared images of the page in question and render the excised text visible once more. What this revealed was a second colophon written in verse, similar in spirit to the first, but with a far more personal touch that can only be Tommaso’s. Huskey transcribes and translates the passage as follows:

Tommaso Baldinotti, a young man, wrote this Lucan for himself and with his own hand. May Christ grant him mercy when he dies, and may the Lord forgive his debts and direct him along the path of righteousness.

Whether Tommaso immediately disliked these verses, or he came in at a later age and was embarrassed by the poetic aspirations of his teenage self (something we can all perhaps relate to), or the pen which excised these lines belonged to a later reader, we will perhaps never know. But what we do know is that another manuscript copied by Tommaso includes a similar poem as its colophon, and that one evaded deletion.

The third colophon, then, is the closest thing this book has to a scribe’s signature, in including both his name (Latinized in the accusative as Tomam) and the date of the copy (January 1465). What Huskey noticed was peculiar about this, however—and easily missed by the untrained eye—is that the handwriting and ink color differ from the other words on this page, despite an apparent attempt to match them. Not only that, Huskey saw whoever wrote the colophon didn’t have the scribal skill Tommaso did (or, apparently, strong Latin—it contains at least one grammatical error). Leaving us to ask, who would have gone to such trouble to essentially forge the scribe’s signature, thus rescuing his efforts from anonymity? Huskey’s guess: Tommaso’s nephew, who inherited the book and loved his uncle too much to let his work go unacknowledged.

Maybe this kind of manuscript detective work doesn’t change how history will remember the Pharsalia. But it does tell us more about the people who have chosen to read, copy, and share these kinds of books across history. And if that’s not a reason to study Latin, I don’t know what is.