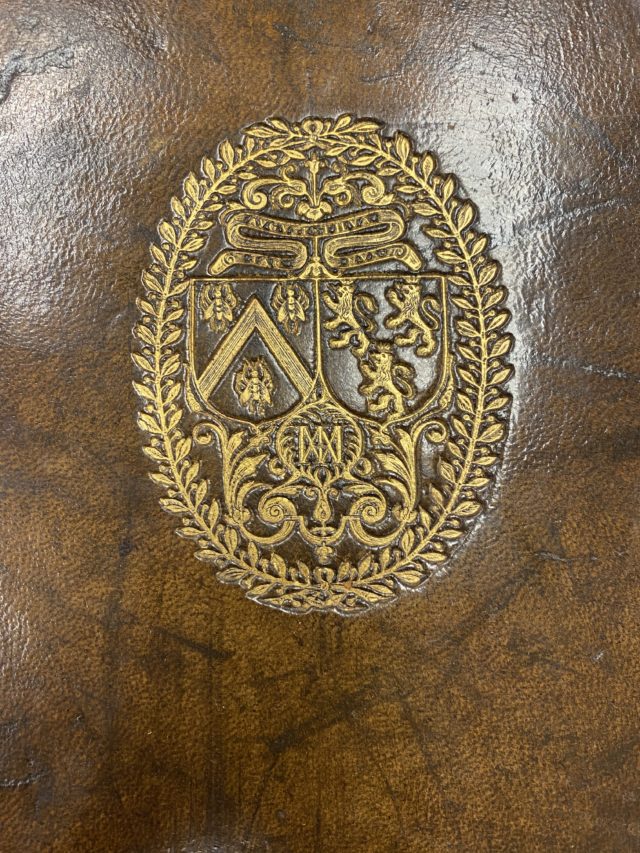 The following was written by Camille Davis, curatorial assistant to Dr. Eric Ensley

Jacques Auguste de Thou (8 October 1553, Paris – 7 May 1617, Paris), also known by his Latin name, Thuanus, was a French historian and president of the Parliament of Paris. He was also the key negotiator in the Edict of Nantes with the French Huegonots. In special collections libraries, he is known by his distinct provenance bindings that leave a trail of his history throughout the stacks.

While he inherited his father’s library in 1583, de Thou was also known to be an avid book collector himself. Unlike other collectors, his books have three distinct decorative styles that inform us of when in his life he acquired these books. As the Conservation Online database notes, “many of [de Thou’s] books were simply bound in red, olive, or citron colored morocco, with plain boards, a few border lines in gilt, and his coat of arms in the center of the upper cover, surrounded by laurel branches, but with only the title and his cipher on the spine” (“Jacques Auguste de Thou”). This distinctive style makes his bindings particularly easy to spot when pulling from the stacks. The first binding style is simply his coat of arms: argent, a chevron between three sable flies, and his initials. We know that he had these books bound when he was a bachelor as his other two bindings were always ciphers of his coat of arms and initials. When he was married to his first wife, Marie Barbançon, the provenance bindings seamlessly integrate his sable fly insignia with her triple lion coat-of-arms. A cipher of their initials also appears at the bottom of this gilt binding (Fig.1). After she dies and he is remarried to Gasparde de la Chastre, he will once more ask for his custom bindings to represent their shared coat of arms. After his death, his son, François Auguste de Thou would continue to have books bound with this final cipher. This moving tribute to both of his parents also can make it difficult to discern which of the De Thous had the book bound.

Typically, these coats of arms are gilt and are on plain brown calf bindings that have minimal tooling. However, the British Library, specifically, has many particularly interesting bindings that had belonged to de Thou. Karen Limper-Herz, binding expert and the curator of incunabula at the British Library, has previously discussed how de Thou, as a bachelor, had several lovely green and gold gilt fanfare bindings made for him as a bachelor. Another book in the British Library’s holdings that is distinctly different than his later bindings is a painted goatskin binding that was bound for de Thou during his marriage with his second wife, Gasparde de la Chastre.

During the time that we have been recataloging the 16th century books at the University of Iowa Special Collections & Archives, we have spotted at least one of de Thou’s bindings and we certainly expect that there are more yet to be discovered in the stacks. The binding that was spotted was from the time when de Thou was married to his first wife, Marie Barbançon. As is typical for de Thou’s bindings, a laurel wreath surrounds their insignias (Fig. 2). Above the combined coats-of-arms, there is a ribbon that says “Jac August Thaunus.” In the center of the coats-of-arms is a cipher of the combined “IAT” (the “I” being a replacement for “J” at the time) and “M” so that both spouses are represented.

Fascinatingly, this book is a copy of letters to and responses from John Calvin as well as “several letters from distinguished men in the church of God” (or, as the title actually is in Latin, “Ioannis Calvini Epistolae et responsa: quibus interiectae sunt insignium in ecclesia Dei virorum aliquot etiam epistolae,” FOLIO BX9420 .A5). Since we know that this book was in de Thou’s possession, it gives further proof of how he was actively reading the work of the major Protestant minds of the time so that he might be able to work with them on behalf of the French government. If it were ever possible, it would be compelling to see a full compendium of the works in his library so that more could be known about which works de Thou thought were the most relevant to his time, his life and his work.

It is likely that the University of Iowa has more of de Thou’s bindings within their stacks. After de Thou’s death, his collection of 13,000 books became the property of Jean-Jacques Charron before they were sold off in 1789. Since that time, these books have found happy homes in many special collection stacks. However, unless a library is particularly attuned to those researchers who wish to search library catalogs for bindings and provenance, like the British Library or the Koninklijke Bibliotheek, then it can be particularly hard to find these bindings. Another interesting future digital humanities project would be to follow where all of de Thou’s books ended up; especially if a significant portion ended up in publicly accessible holdings. Then we would be able to piece together a more complete portrait of what books this significant bibliophile, statesman and historian of the 16th century found to be the most valuable books both for his own edification and for his writing. It would have significant implications for the book trade of the time. But, until such a project could happen, we will have to keep one eye open for this unique cipher that winks at us whenever we pass through the stacks.