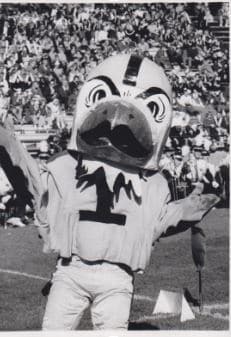 As we get ready to celebrate Herky’s 70th birthday, curator of the “Hatching Herky” exhibit, Chloe Waryan, looks back on her experiences and Iowa mascots of old.

In the summer of 2018, I was fortunate enough to be awarded an internship at the University of Iowa Special Collections and University Archives in which I was tasked to design an exhibit celebrating the 70th birthday of Herky the Hawk. I am so touched by the kindness that I received from University Archivist David McCartney, Director of Development Mary Rettig of the Center for Advancement, and donor Jane Roth. I am happy to report that I had a lot of fun learning about the history of the University of Iowa during this internship too!

Though the pre-Herky mascots didn’t make it into the exhibit, their history is fascinating. With the popularity of St. Burch’s Tavern, a new downtown restaurant, many Iowa Citizans may already know that our first mascot was a real live black bear cub named Burch. The significance of a bear as an emblem of UI is unknown, though we do know that the Chicago Cubs also had a black bear sent to them to serve as a mascot around this same time. When Burch became a full-grown bear, he broke out of his cage in the City Park Zoo (yes, City Park once had a zoo), and fled to the riverbank where he was later found dead. On March 10, 1910, the Press Citizen released an article titled “Burch is Found with Taxidermist,” detailing the plans of taxidermist Homer Dill who did work for the University of Iowa Museum of Natural History. However, after talking to Cindy Opitz, current Collections Manager of the UI Museum of Natural History, we learn that if he did indeed drown, Burch’s head was probably bloated and therefore not suitable for taxidermy. According to a Press Citizen article on April 8, 2018, Trina Roberts, Director of UI’s Pentacrest Museums, does not know where Burch’s head or bones may be.

Almost 20 years later, the University adopted a 200-pound Great Dane named Rex as their next mascot. Lieutenant Colonel Converse K. Lewis, head of the UI Military Department, originally gifted the dog to Alpha Sigma Phi. Rex wore a tailored band uniform at football games and acted as the UI mascot until his death in 1933. Following Rex’s death, the University received another dog (either a Great Dane or St. Bernard) which they cleverly named Rex II. The University also used a real hawk as a mascot before Delta Tau Delta’s own Larry Herb donned the first Herky costume in the late 1950’s. From then on, Herky was always cast as a Delta Tau Delta until the fraternity lost their UI charter in 1998 due to drug and alcohol use. Tryouts for Herky the Hawk opened up to the entire student body of UI. In 1999, Angie Anderson and Carrie MacDonald were the first female students chosen to be the mascot. Anderson was injured while playing Herky when an Ohio State band member wielded a 3-foot foam banana at her head. She filed a lawsuit against Ohio State and in 2002, Anderson was awarded $25,000. Shortly after, Herky’s “human identity” was kept a stricter secret and security members were also hired each year, in order to keep the mascot safe.

As a graduate of the UI School of Library and Information Science program, I learned through this internship many things about collaboration in libraries. I was welcomed onto the Herky Birthday Committee with open arms. I formed a great partnership with the Spirit Coordinator of UI. I learned about the awesome physical education collection at the Iowa Women’s Archives. All in all, I will truly treasure my time at the Special Collections. Even the rainy days were fun!

Join us September 14th, 2018 for a special Open House to celebrate the history of Herky. Event starts at 11AM and runs till 2PM, 3rd Floor of Main Library. Herky will even be joining us for the party starting at 12PM! All are welcomed to join!