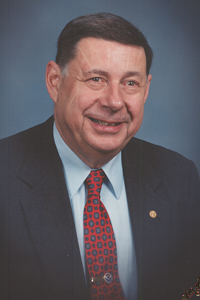 We depend on weather satellite images daily for our forecasts and travel plans. Without the groundwork laid by the National Earth Satellite Service beginning in 1972, though, these images would not be possible today. A distinguished UI alumnus, George H. Ludwig (BA ’56, MS -59, Ph.D. ’60) was a founding director of NESS and led its operations throughout the 1970s. It is part of Mr. Ludwig’s long and significant career in physics and environmental research, now documented in his papers recently donated to the University Archives.

Mr. Ludwig, a native of rural Johnson County, Iowa, was a graduate student under James Van Allen during the pioneering Explorer space exploration missions in the late 1950s. He was the principal developer of the cosmic ray and radiation belt instruments for the successfully launched Explorers I, III, IV, and VII. He was also a research engineer at the Jet Propulsion Laboratory in Pasadena, California for a five month period following the 1957 launch of Sputnik I by the Soviet Union.

His papers chronicle his research in physics as a doctoral candidate at UI as well as the many projects he supervised or consulted while with NASA, the National Oceanic and Atmospheric Administration, and other organizations throughout his 40-plus year career. The guide to his papers is at http://www.lib.uiowa.edu/spec-coll/archives/guides/RG99.0004.html; the guide does not yet account for the most recent materials received by the Archives.

George Ludwig’s contributions to space exploration and environmental research are invaluable, and the University Archives is honored to document his achievements.

You can see a remarkable image of George Ludwig with his Cosmic Ray detector on NASA’s Jet Propulsion Lab web site:  http://www.jpl.nasa.gov/missions/details.php?id=5873#3