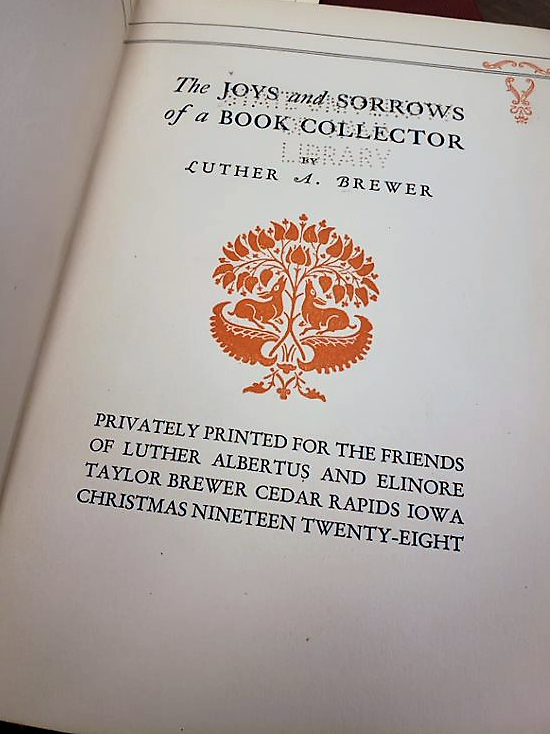 “From the Classroom” is a series that features some of the great work and research from students who visit our collections. Below is a blog by Lisa Tuzel from Dr. Jennifer Burek Pierce’s class “Reading Culture History & Research in Media” (SLIS:5600:0001).

In her NYT Best Seller The Life-Changing Magic of Cleaning Up, Marie Kondo made headlines with her strategy for minimizing belongings, including books. Kondo claimed to winnow down her own collection to just 30 titles (93 – 95). Book lovers and readers on social media had a visceral reaction to Kondo’s plan – “30 books, you mean on my nightstand, right?” Kondo’s tendency toward minimalism is one that has been common in the United States since World War II, however, this tendency is at odds with an older aspect of book culture: bibliomania.

Bibliomania, the passion for collecting books, was coined by John Ferriar, a physician at the Manchester Royal Infirmary, in an 1809 poem dedicated to his friend, Richard Heber. The term was commonly used through the nineteenth century to describe obsessive book collecting. It is widely agreed that a tense bidding war over Giovanni Boccaccio’s Decamerone between Lord Spencer and the marquis of Blandford in 1812, which ended in a staggering price of £2,260, marks the “central, defining moment in what was known as the ‘bibliomania’” (Connell 25). From this moment, writings concerning the trend of book collecting flourished. In them, the obsession of book collecting by the upper classes in the 19th century is optimistically attributed to saving the literary and cultural history of a nation, to a more cynical view of “book gluttony” that saw collectors “preserve learning … almost in spite of themselves” (Connell 36).

One of the seminal works regarding bibliomania is Rev Thomas Frognall Dibdin’s Bibliomania or Book Madness (1811), of which two editions can be found in the University of Iowa Special Collections & Archives. Written as a series of dialogues about book collecting, the work offers up a satiric mock-explanation of the disease bibliomania, its symptoms, and possible cures.

In the 20th century, Holbrook Jackson, a British journalist and avid book lover, published a number of essay collections that extolled the virtues of books and reading. UI Special Collections owns a copy of The Anatomy of Bibliomania (1930) and Bookman’s Pleasure: a recreation for book lovers (1945). Anatomy of Bibliomania explores questions that all book lovers and collectors mull over, such as The Art of Reading, The Uses of Books, and How Bookmen Conquer Time

and Place . The Table of Contents proceeds beyond the love of books to Parts XXIII through XXIX, a discussion of the evolution to bibliomania.

The conversation regarding bibliomania was not confined to Great Britain. In the United States, Eugene Field, also a journalist, published The Love Affairs of a Bibliomaniac in 1896, which became part of the canon of books about books. Following a fictionalized bibliomaniac protagonist, The Love Affair highlights the sensual nature of loving books (Shaddy 53-54).

The conversation around book collecting has continued for more than 200 years. Why does this conversation persist? It could be the symbolism attributed to books: that the number of books on one’s shelves is directly proportional to the value placed on knowledge and learning. Perhaps the number of books is equal to the intelligence of the collector. Or maybe a full bookshelf is aspirational. Perusing the Table of Contents of these foundational works about bibliomania demonstrates the varied paths collectors take. Whether they collect for love of knowledge, appreciation of the physical artifact, preservation of text, or for vanity, book collectors enjoy the meta-exercise of thinking about why they collect books. Whatever the reason, critics and authors continue to delve into what it means to be a collector of books and whether or not the tendency is symptomatic of mania.

Shaddy, Robert A. “Mad About Books: Eugene Field’s The Love Affairs of a Bibliomaniac.” Midamerica: The Yearbook of the Society for the Study of Midwestern Literature, Vol.24, 1997, pp. 53 – 73.

Young, Lauren. “Bibliomania, the Dark Desire for Books that Infected Europe in the 1800s.”