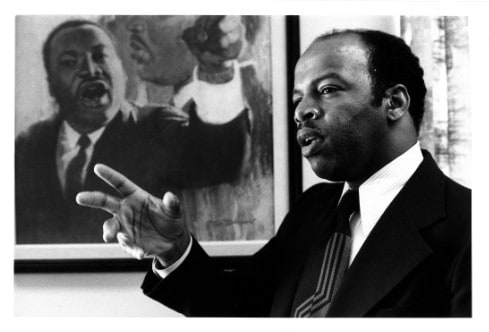 With the presidential election and Inauguration over, there has been a lot of talk about voting rights in the news. With Raphael Warnock’s win, Georgia’s first Black senator, we are reminded that the struggles and work of the Civil Rights Movement was not distant history.

This coincides with a recent discovery in the Darwin Turner Papers.  While exploring the collection, we learned that the late U. S. Representative John Robert Lewis spoke at the University of Iowa in Shambaugh Auditorium on Friday night, June 16, 1978, about “Black Liberation and Political Action.”  This was at the invitation of Darwin T. Turner, head of the Afro-American Studies Program here at University of Iowa.  Turner organized 19 speakers for a two-week 1978 summer institute, the tenth at the University of Iowa, for teachers of Black history and culture from around the country.  The 1978 theme was “Black Culture in the Second Renaissance: A Study of Afro-American Thought and Experience, 1954-1970.”

John Lewis had typed a brief acceptance letter in reply to Turner’s invitation, and then he turned the paper over and wrote a personal note on the back about the speech he had presented in 1963 at the March on Washington.  He included with the letter a recent photograph of himself.  Lewis was introduced in Iowa City as the former director of the Voter Education Project in Georgia and the associate director for domestic operations at ACTION, a volunteer service in Washington, D. C., within the Office of Public Affairs.  In 1963, Lewis was also chairman of the Student Nonviolent Coordinating Committee (SNCC), an organization you can learn more about through the papers of Eric Morton. Darwin Turner said of Lewis– along with James Farmer, Larry Neal, Ed Bullins, and James Turner who were also there to speak–helped shape the culture of the era.

Another of the 19 speakers at the 1978 institute was Jibreel Khazan, born Ezell Blair, Jr. In his lecturer application, Khazan submitted a Bowsprit newspaper article that relates his experience as one of the Greensboro Four.  On February 1, 1960, Blair (as he was known then), along with fellow Black college students Joseph McNeil, David Richmond and Franklin McCain, seated themselves at the Woolworth’s lunch counter in Greensboro, North Carolina, and asked to be served.  They told the waitress they preferred to sit after she directed them to the standing counter Woolworth’s had designated for Black patrons.  She called a nearby police officer, who did not act, so the store closed early after the students had been sitting for about 15 or 20 minutes.  These four students stated they felt different when they walked out of Woolworth’s.  The following day, 24 Black students joined them at the lunch counter and the waitress just let them sit there.  On the third day, the New York Times reported that the students would continue the sit-in until they were served, prompting sympathetic white students to join the hundreds of Black students.  On the fourth day, the Ku Klux Klan arrived.  As things became threatening, Black football players protected the students.  Another store with a lunch counter, S. H. Kress, was also experiencing sit-ins.  On the sixth day, the 3,500-student body voted to continue the sit-ins, followed by the arrival of thousands of demonstrators from area schools.  Woolworth’s closed after receiving bomb threats.  The next week, Greensboro students halted the sit-in during negotiations.  However, sit-ins spread to other towns that week and the next.  By the end of that February, Montgomery, Birmingham and Tuskegee were experiencing sit-ins.  North Carolina, Virginia, Florida, South Carolina and Tennessee, as well.  In May, Blair was arrested, charged with trespassing and fined.  Finally, on July 25, Woolworth’s and Kress provided access to everyone at their lunch counters.

Following the death of Representative Lewis on July 17, 2020, a push to update the Voting Rights Act of 1965 has been renewed.  In December, Senator Patrick Leahy’s website explained “the John Lewis Voting Rights Advancement Act establishes a targeted process for reviewing voting changes in jurisdictions nationwide, focused on measures that have historically been used to discriminate against voters.” His legacy also lives in the work of the new senators coming to Washington D.C. After winning the election, Raphael Warnock tweeted “John Lewis was a mentor, friend and parishioner. I’m honored to fight alongside my brother [John Ossoff] to carry on his legacy.”

*Jibreel Khazan’s presentation, “The Advent of Divine Justice: Attitudes for Freedom,” was filmed, and will be placed in the Iowa Digital Library.

**You can learn more about the Afro-American Studies institutes in the Darwin T. Turner Papers (RG 99.0340). 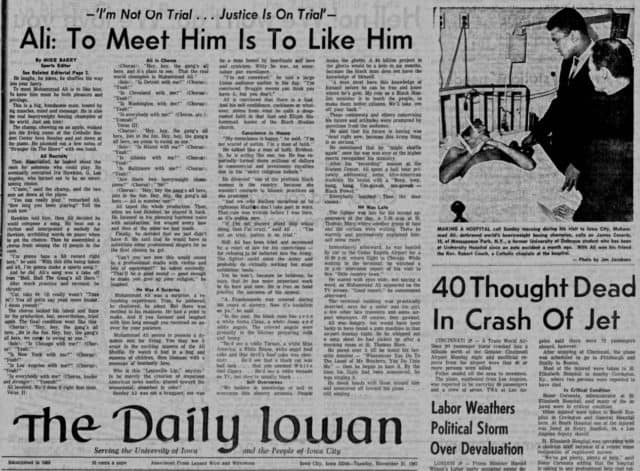