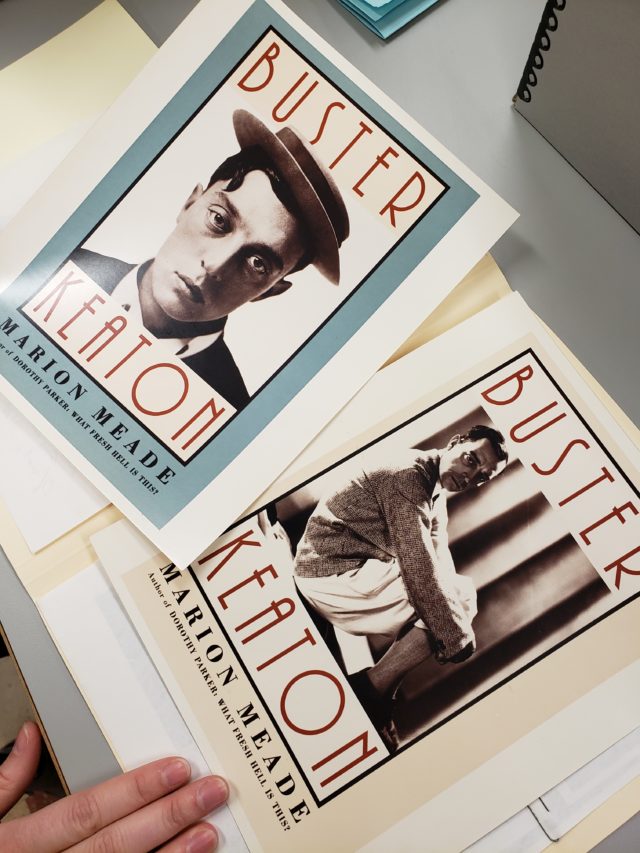 Sitting in a dark auditorium in Iola, Kansas, two friends watched Our Hospitality with a live band accompaniment. The annual Buster Keaton Celebration had begun, and the audience around them clapped and cheered as the screen illuminated Keaton donning his signature pork pie hat. The utter glee of watching the antics of this silent cinema star filled the room almost a century later.

But there lies the magic of Buster Keaton. Time may pass, but Keaton’s stunts and storytelling continue to intrigue audiences, old and young alike. Associate Curator of Iowa Women’s Archives Anna Holland and Lead Instruction and Outreach Librarian Elizabeth Riordan sat in that auditorium back in 2012, partaking in the Keaton Celebration. Neither one realized that they would soon be working in the archives that held the research files of Marion Meade, Buster Keaton biographer.

Meade undertook the monumental task of capturing the life of Joseph Frank “Buster” Keaton for a biography on the actor. She had already made a name for herself in the literary world with a series of feminist-themed novels and had broken into the biography scene in 1988 with a book on American poet Dorothy Parker. By the mid 1990s, she was ready to discover what was under the “Great Stone Face.”

Buster Keaton – Cut to the Chase by Marion Meade hit bookstores in 1995 nearly 30 years after Keaton’s death. Published on the 100th anniversary of Keaton’s birth, it aimed to underline his cinematic legacy with a definitive biography and introduce him to a new generation of cinephiles who may not have gotten a hold of a VHS copy of The Navigator or encountered his 1960 autobiography. Since its release, the book has received critiques for its sometimes-harsh take on Buster’s early life, as well as a general lack of objectivity. Despite critiques, the book still holds sway, with rumors that it will soon be turned into a film with 20th Century Studios.

Meade’s chapters are reminiscent of silent film shorts, barely any exceed 20 pages, making Keaton’s life easily digestible. She sets scenes artistically, and engagingly. Meade introduces Keaton by transplanting us in a noisy, cold Times Square before describing a 21-year-old who “looks younger, with a solemn, pretty-boy face and a shock of straight dark hair” (Meade, 1). After setting the mood, she takes a deep dive into the history of Keaton’s family and then on a step-by-step journey through his life and career. The book gives ample attention, and several pages of photographs, to the joys and scandals in his personal life along with his films.

Despite its shortcomings, Meade’s meticulous research is evident throughout the book. Not only did she dig into details like Keaton genealogy, but Meade also held dozens of interviews. She went out to gather oral histories with family, friends, and colleagues of Keaton. Tapes and tapes of interviews soon stacked up, including interviews with Keaton’s third wife Eleanor, his son John, and those who worked behind the scenes on his famous film The General. Meade took advantage of something biographers today can only dream of: still-living vaudevillians, actors from the golden age of Hollywood, and members of Keaton’s own family who all told detailed stories of their lives and Keaton’s. These interviews, doggedly pursued by Meade, are perhaps the most important and lasting contribution of Cut to the Chase.

Meade’s research and interviews on Buster Keaton were bought by the University of Iowa Libraries Special Collections & Archives, along with her work on Woody Allen, Nathanael West, and Eileen McKenney. Meade’s papers are open to researchers, or simply the curious public, and anyone can find out more about what is in the collection by exploring the online finding aid here.

For Keaton fans Elizabeth and Anna, using this collection at work has been a dream come true, but anyone can access these research files. For those of you interested in following in the research footsteps of Marion Meade, contact UI Libraries’ Special Collections & Archives , and we’ll walk you through visiting the collections.