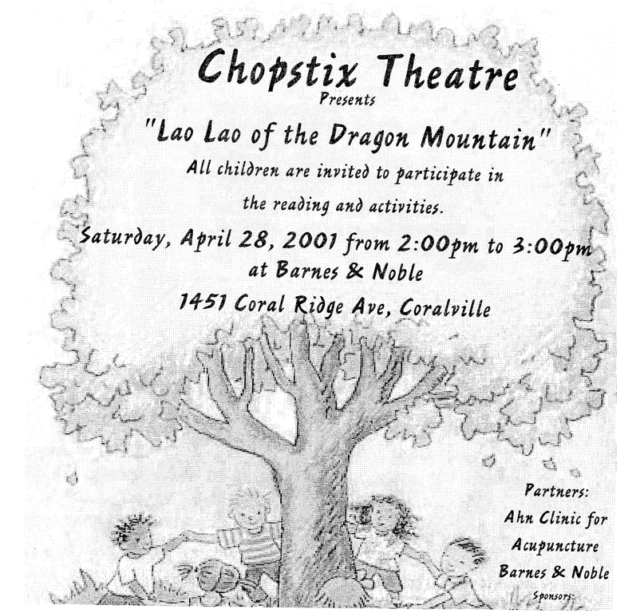 Here alumnus Kim Long discusses what it meant to have a graduate mentor in the Asian American Coalition:

Chopstix Theatre was a small group started by Asian American Coalition Members. They created puppet shows and reenacted children’s stories from various Asian countries as well as Asian American specific stories. They performed at the Iowa City Public Library, the Iowa Children’s Museum, Barnes & Noble, and at cultural festivals for kids. The goal was to introduce Asian culture and people to the children of the predominately white community in the Iowa City area with the hope that these fun stories would help kids grow into accepting adults.

Listen to alumnus Omega Dancel talk about the origins and purpose of Chopstix Theatre: 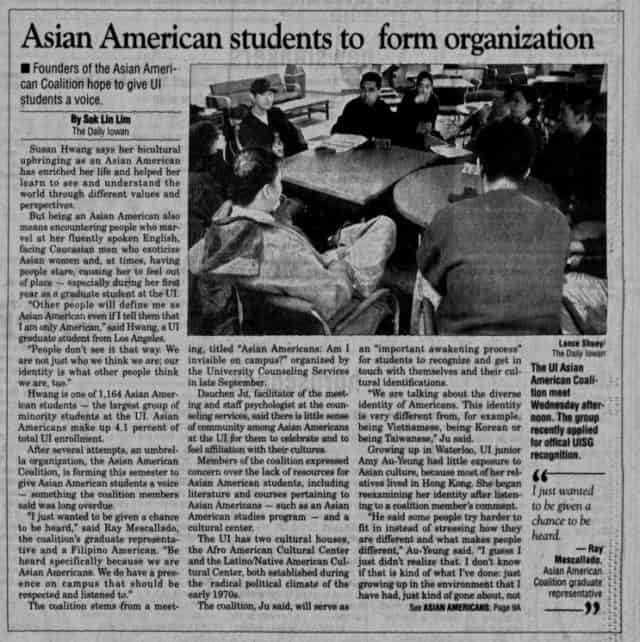 Listen to Dr. Dau-shen Ju recount the lack of resources for Asian American students on campus in the fall of 1998:

Instead of Dr. Ju providing a formal presentation to this diverse group of students, they all sat in a circle together and began talking about their own Asian American experiences reflective of their induvial lives. This helped students recognize their shared experiences as Asian Americans on campus and in Iowa. The conversation in the group highlighted issues shared within the Asian American community including the invisibility that comes with living in a white/black racial binary and the lack of resources for Asian Americans at the University.

Here law student Ian Hirokawa describes what happened in that first meeting “Asian Americans: Am I Invisible” on September 21st 1998:

The students who initially attended Dr. Ju’s presentation would become the original leaders of the Asian American Coalition. This early meeting included Evelyn Ho, a Chinese American PhD student born in California who felt her Asian identity become uniquely racialized in Iowa in ways that never happened in California or Seattle where she went to college; Anthony Pham, a Vietnamese American undergraduate student raised in Iowa who felt he did not quite belong in the Vietnamese Student Association; Xuefan Sun a first generation immigrant from China who arrived to America at the age of fourteen who felt uniquely different from American Born Chinese (ABC’s) and the international students from China.

Hear Dr. Evelyn Ho share her memories of moving to Iowa and the racialization she experienced:

After the initial meeting, one graduate student in attendance, Ray Mescallado, suggested that the group meet again as there were many more conversations to be had. While the original cohort of members could not pinpoint the exact moment when they transitioned this informal discussion group into the Asian American Coalition as a student organization, this initial meeting was certainly the beginning of what would become a pan-ethnic umbrella organization for all Asian Americans at the University of Iowa.

The next blog will look at the early years of the Asian American Coalition.