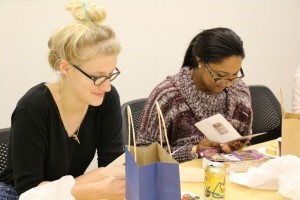 It has only been a few months into my new position as Department Liaison, and one of my major job duties is to supervise the student employees. I did not anticipate that the hardest part of this new job would be watching wonderful students graduate and leave the department.

This Fall 2015 semester, two outstanding students graduated: Zoë Webb and Mallory Price. Both students will be sorely missed, and I think I can speak for the entire department when I say, they will be hard to replace!

Zoë Webb graduated this semester from the University of Iowa School of Art and Art History with a degree in Art, and finalized her undergraduate career with a BFA show titled “Don’t Stray From the Path”. Zoë’s show featured a room not only filled with her original artwork, including some impressive metal works, but it also included artistically placed trees and leaves to give the viewer the sense of walking through an ethereal forest inhabited by faeries.

Zoë began her Special Collections journey in January 2012, where she has completed a wide variety of projects in the department. She’s made spine labels, processed books, including hundreds of science-fiction paperbacks, and helped with some major shifting projects in her many years here. I will definitely miss her shared love of fandom, expert artistic skills, and knack for finding amazing things on accident.


Mallory began working in the Special Collections department in May 2014, and during her time here has been our primary front desk student. Along with assisting patrons with numerous questions, ranging from helping them to use the scanner, to detailed research questions, Mallory has proved herself to be a huge asset in all things reference! I will miss her expertise in helping others, her positive attitude, and friendly smile!Mallory Price graduated this semester from the University of Iowa School of Music with a Bachelor’s degree in Music, with a focus on Music Therapy. An outstanding violin player, Mallory finalized her undergraduate career with a Senior Recital, playing music from Beethoven, Fritz Kreisler, and Dvořák.

On behalf of the entire Special Collections and University Archives Department, we wish Zoë and Mallory the best of luck in the future!

July 28th marks the 148th birthday of Beatrix Potter:  illustrator, natural scientist, conservationist, and, of course, world-famous author of  The Tale of Peter Rabbit. Here at the University of Iowa, we are fortunate enough to have a copy of one of the first printings of this charming tale, which according to our acquisition papers, was previously owned by Potter’s niece. The provenance is not the only thing that makes this copy special, but the condition alone is enough to impress any Beatrix Potter collector. Children’s books were often avidly read and handled, hence, finding this famous piece of children’s literature in such good condition is quite remarkable. When placed next to a 1993 facsimile, only the size and slight difference in the color can distinguish the two.

This particular book was one of 250 that were privately printed by Potter, as she was initially rejected by multiple publishers for commercial printing. Our copy’s acquisition papers shows a curious note that Potter’s records indicate it was privately printed in 1900, and then later issued in 1901. However, the privately printed edition was printed in 1901. Potter primarily gave out copies to family and friends, along with selling them for a small fee. [Linder, Leslie. A History of the Writings of Beatrix Potter. Frederick Warne & Co Ltd, 1971.]

After a second printing of 200 first editions of The Tale of Peter Rabbit in February 1902, the story started to gain some popularity. Eventually, after some textual alterations and the addition of color images, Frederick Warne & Co. published 8000 copies of the first commercially sold edition of The Tale of Peter Rabbit in October 1902. Some of the changes to later productions were to omit pages that were deemed “unsuitable for children”. 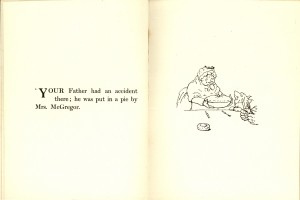 One set of these omitted pages show how Peter Rabbit’s father was put in a pie by Mrs. McGregor (this made it into the first commercially sold edition). 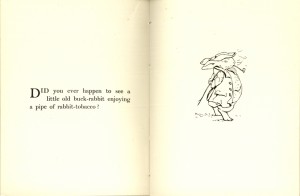 Another set of omitted pages show a rabbit smoking a pipe of tobacco (which only appears in the privately printed editions).

Along with many related Peter Rabbit books, such as The Peter Rabbit Pop-Up Book, Peter Rabbit’s Cookery Book, and Yours Affectionately, Peter Rabbit (currently on display in our reading room), we also have a later edition of The Tale of Peter Rabbit, which is undated, but is at least as old as 1918 based on the decorated endpapers inside the book.This cover style, which began with the first commercially printed edition in 1902, can be seen in contemporary publications.

Beatrix Potter has thirty-three titles to her name, twenty-three being similarly written tales to accompany The Tale of Peter Rabbit. We have many of these wonderful tales in our collections, and audiences of young and old are welcome to take a look!

Can’t make it to to the collections? Check out a fully digitized version of the first edition, first printing of The Tale of Peter Rabbit here!