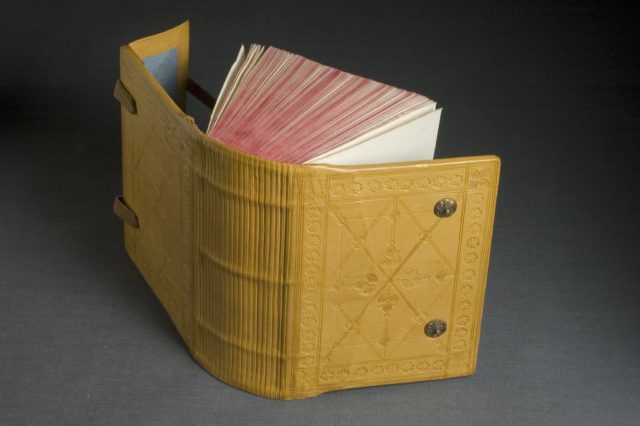 “From the Classroom” is a series that features some of the great work and research from students who visit our collections. Below is a blog by Natasha Otteson from Dr. Jennifer Burek Pierce’s class “History of Readers and Reading” (SLIS:5600:0001) 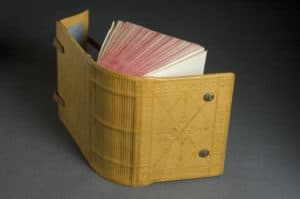 The University of Iowa Libraries has a number of bookbinding models available for research in its Book Model Collection, found in the Conservation Department located at the Main Library. Often utilized in Special Collections classes, this collection is used to exemplify and demonstrate the various mechanisms of books. One of these models is a reproduction of a 17th century Armenian codex Hayrapet Gospels, and was produced by Shanna Leino (Collection Number: 17a.01).

Though the printing press came to the Western world in the fifteenth century through German inventor Johannes Gutenberg, hand-written manuscripts continued to be produced in Armenia until the First World War in the early twentieth century. This was likely due to either one of two reasons. Creating a manuscript by hand was seen as a holy act, one that paid homage to the monk-scribes before them, or, as in the case with texts of religious significance, multi-colored illustrations and illuminations were of higher quality when done by hand, rather than at the press.

There are several qualities that distinguish Armenian bookbinding traditions from others. Armenian codices were bound in either calf or goatskin leather, and the color of the leather would be a shade of brown. The surface of the leather would contain blind tooling (though never in gilt) on both the front and the back covers. Attached to the back cover was a fore-edge flap. This flap was also bound in the same leather as the cover, and it would contain tooling in the same style as that on the front and back covers. The flap was precisely the same size of the fore-edge, and the purpose of this flap was to protect the leaves from damage. The inclusion of this flap created a protective, almost box-like container for the text block.

The spine of the codex was composed of thin, vertical fillets intended to aid in opening. Armenian books were bound in the Coptic style, where the quires of the text block were sewn together through the folds. Armenian bookbinders would employ the use of “grecquage”, a technique that inserted V-shaped notches into the quires. This would allow the sewing needle to pass through the notches with ease, as well as the support cords to be recessed within the spine of the codex. Endbands were utilized to protect the structural integrity of the spine, and a chevron design was often used. [insert “Blog Image 3.jpg” photo]

The size of the boards used in the binding are the same size as the text block of the codex. Compared to other books of this time period, the boards used are relatively thin, usually between 2-5mm thick. In a typical codex the grain of the wood runs vertically, but in most Armenian books, the wood grain of the board runs horizontally. Lastly, instead of paper, parchment, or vellum, like most other books of this era, Armenian books utilize a cloth covering on the inside of the front and back boards, usually linen. Together, these characteristics make early Armenian books a fascinating study in bookbinding techniques. 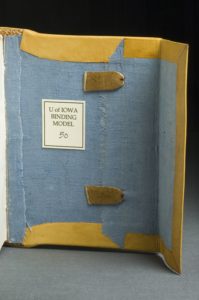 To learn more about the Book Model Collection, or to schedule a time to view it, please check out the Conservation Department’s website or contact Head of Conservation, Giselle Simon (giselle-simon@uiowa.edu).