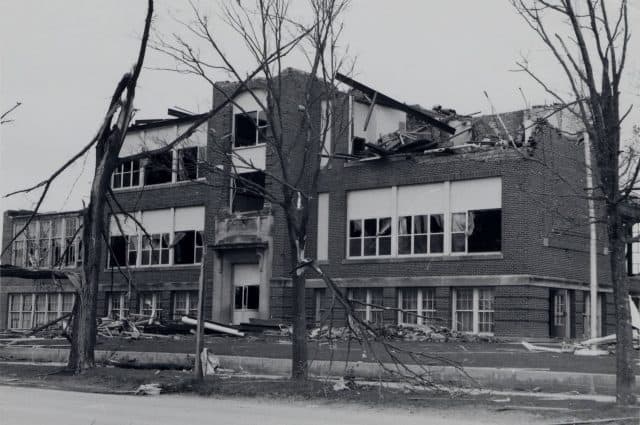 Summer for a Midwesterner means corn on the cob, days at the pool or setting up the sprinkler in the front yard, gnats galore, and humidity that makes the air feel like soup. However, summer in the Midwest also brings to mind pictures of tornadoes that swoop down from the sky and destroy so much in so little time. As scary and damaging as these moments are, the sheer power of Mother Nature can leave lasting impressions of awe in us.

Our own University Archivist, David McCartney, has been recollecting his own experiences with tornadoes. David’s home town, Charles City, Iowa, recently marked the 50th anniversary of when an F5 tornado ripped through the town, killing 13 people and injuring 450 more. On May 15, 1968 a tornado estimated to be half a mile wide hit Charles City at 4:50 PM. Roughly 60 percent of the city was damaged by the tornado, and the damage was estimated to be around $30 million. The tornado continued on for 65 miles, destroying farms and anything else along the way.

David was 11 at the time, but he still can recall many of the events of the day, including his school’s annual track and field event, that earlier afternoon being incredibly windy, and his brother watching the progression of the tornado from the basement window and reporting it to the family who sat waiting nearby. To mark the 50th anniversary, David appeared as a guest on KCHA, the local radio station, which aired a special program to commemorate the event. For David, he first heard the news about the approaching tornado when he got home from school and turned on the TV and believes the local TV and radio stations reporting the progress of the tornado helped save many lives. David, himself a former broadcaster, assisted the station’s staff with research of the event and arranging several interviews with those who witnessed the tornado’s destruction.

A lot can change in a matter of moments, and we are glad David is here to share his stories.

Listen to David on the KCHA program here!

Or you can read more about the event here