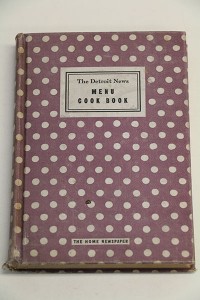 In August of 1920, a radio station under the name “8MK” was launched for The Detroit Evening News. Later named “WWJ”, it was the first radio station with daily programs. Less than a year after the station was launched, the radio show “Hints to Housewives” was created and later, “Tonight’s Dinner by Radio”. The show aired every morning, except for Sundays and holidays, and included ideas for evening meals and table service. Recipes for the dishes on the show were then published in the Women’s Pages of The Detroit News. However, many listeners and readers wanted a more permanent form of the recipes, so in 1933, The Detroit News published The Detroit News Menu Cook Book. 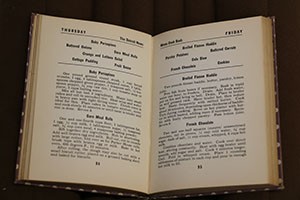 This cookbook includes four weeks of dinner ideas for each of the four seasons, as well as meal ideas for a few major holidays, like Christmas and Thanksgiving. There is a wide variety in the menus included, from “Meat Loaf with Scalloped Potatoes and Mashed Turnips”, to “Calf Hearts with Onions and Parsley Potatoes”. The book even includes a recipe for “Baby Porcupines”, which do not actually contain any porcupine, but appear to be meatballs rolled in rice. Everything from Brussel sprouts to apple soufflé can be found in this book. In the back of the book is a section titled “CleaningHints”, which includes suggestions for removing stains from clothes, removing mildew spots, and even how to clean oil paintings.
Even though it is over eighty years old, this adorable purple with white polka dot cookbook could be found useful today. 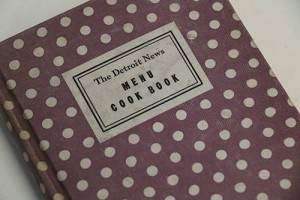