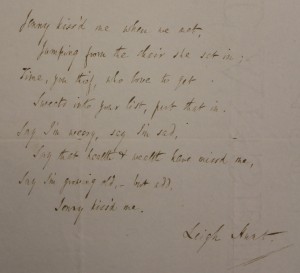 This past spring was a good season for acquisitions in Special Collections, Leigh Hunt material not least among them. Not only did we pick up Percy Shelley’s personal copy of Hunt’s Feast of the Poets—a spectacular association copy, as Hunt and Shelley were remarkably close friends—but we acquired four Leigh Hunt manuscripts.

Two of these are copies of his most famous poems: “Abou Ben Adhem” and “Rondeau.” Perhaps the poem most beloved by posterity, “Rondeau” (more commonly known as “Jenny Kissed Me”) shares the poet’s excitement after having kissed Jane Carlyle, wife of the archetypal Victorian Thomas and neighbor of the Hunts.

The third manuscript is a draft fragment of The Palfrey. Only a few of the lines from this draft found their way into the published version, betraying the significant revisions the poem underwent at the author’s hand.

A transcript of “Velluti to his Revilers” is perhaps the most interesting manuscript in the lot.

It’s not one of Hunt’s best known poems, but the transcript is thought to be in the hand of Julia, the author’s eighth child. While “Velluti” may not make the cut for the latest Norton anthology, Leigh Hunt writes at the end of these lines, “I think them the best (in rhyme) that I ever wrote—if I am old enough to be allowed to talk of my ‘best.’”