It’s kind of like History’s Mysteries meets Antiques Roadshow. There’s an item that’s been lying in your collection for years, possibly decades, patiently awaiting investigation. What exactly is this thing? Then one day—maybe on a quiet Friday afternoon—you suddenly have the urge to dig into it.

That’s what happened here in Special Collections. A medieval manuscript leaf, for whatever reason, had evaded description these last few decades. This warrants a friendly reminder to all book-loving sleuths: you need not be a medieval manuscripts expert to solve such a puzzle (though it sure would help). Sometimes all it takes is a little resourcefulness, an educated hunch, and a bit of luck. 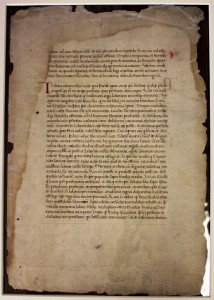 Our leaf turned out to be from De vita contemplativa, a fifth-century theological treatise by Julianus Pomerius. Determining the text of a particular leaf is often easy, requiring little more than Googling a short passage from the text in question. Identifying where and when it was made is the tricky part, but fortune was on our side: this particular manuscript was written on paper.

Medieval manuscripts were predominantly written on vellum (or parchment, but we’ll overlook the distinction for now). Paper wasn’t produced in Europe until the twelfth century, and its importation didn’t begin much earlier. What’s more, to an inexpert eye such as mine, the script appeared Carolingian—the standard book hand developed for the copying of texts during Charlemagne’s reign. While Charlemagne died in 814, this book hand—called Carolingian minuscule, or Caroline minuscule—continued to be used throughout Christendom. But just as paper was growing more common in Europe, the Carolingian script was yielding to the Gothic hand that would soon dominate manuscript production. It seemed unlikely, then, to have a true Carolingian manuscript on paper.

Near the end of the fourteenth century, however, Italian humanists revived Carolingian minuscule. Mistaking the Carolingian manuscripts for original Roman texts, these humanists began copying their favorite classical works in what they believed was their original form. This revived form of Carolingian minuscule has become known as humanistic script. It was commonly used throughout Italy (and later throughout Europe) until the printing of books largely obviated the need to copy them by hand.

And just like that, we came to the likely conclusion that our manuscript was probably made in Italy during the 15th century. 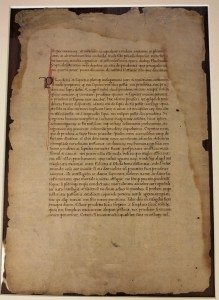 After consulting a couple of manuscript censuses, we learned that a 15th-century Italian copy—on paper—had once been in the private collection of Ernst Detterer, a Chicago typographer and later the inaugural custodian of the Newberry Library’s John M. Wing Foundation. Given the scarcity of copies on paper, and our geographic proximity to Chicago, this all seemed rather coincidental.

With the help of colleagues at the Newberry Library and the University of Colorado, Boulder, we were able to confirm that our leaf did in fact come from that very same Detterer manuscript—more information than we had ever hoped to uncover.

The underlying tragedy, of course, is that the other twenty-eight leaves are scattered across the country, if not the planet. Three, for example, reside at Boulder. It’s a fate befallen many medieval manuscripts, which were commonly sold or otherwise distributed leaf by leaf at a time when the ethics of the practice were a bit murkier. When in Detterer’s collection, the manuscript was unbound, which mustn’t have helped to suppress the urge to separate the leaves. It’s unlikely that all twenty-nine leaves will ever be reunited. The best we can do is to keep our little piece of it safe and secure, to document its history, and to share it with all of you.