The James L. “Rusty” Hevelin Collection of Pulps, Fanzines, and Science Fiction Books in the Special Collections of the University of Iowa Library is a manifestation of fandom, a subculture of shared interest, networking, and activity that grows up around almost any subject. Fandom demands more of its participants than merely liking something; they must become involved. Science Fiction fandom is unique because of its heavy influence on the shaping of the literary genre that spawned it. This post looks at two early examples of Rusty Hevelin’s fan activity as a writer for fanzines. 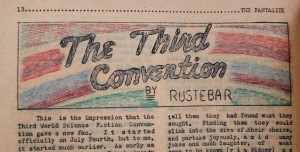 Rusty was a science fiction fan from his teen years in the late 1930’s until his death in  2011. He participated in all aspects of fandom, including fan groups (LASFS, and PSFS),  fanzines (H-1661, StefNews, Nebula, Aliquot, Badly, etc.), conventions, as a fan, “huckster” (“dealer” in fan lingo), and organizer, and avid collecting.

In 1941, when he was nineteen, Rusty hitchhiked from L.A. to Denver to attend Denvention I, the third Worldcon, or World 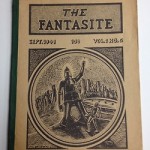 Science Fiction   Convention. He wrote a report of the convention afterwards (as “Rustebar”) for the September 1941 issue of The Fantasite, a  zine Phil Bronson edited for the Minneapolis Fantasy Society. 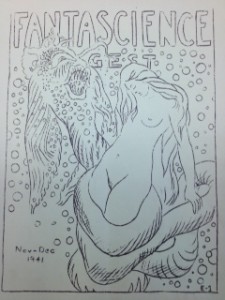 After Denvention I, Rusty moved to Philadelphia where he joined Robert A. Madle and Jack Agnew on the editorial staff of Fantascience Digest. In the November-December 1941 issue, he began a column titled,“Coventry,” (under another pseudonym, “Rust E. Barron”) devoted to the contrary opinions of “rebels and individualists.”

When America entered WWII, Rusty joined the Marines and served in the Pacific as a meteorologist. He continued his fannish activity during the war, which couldn’t have been easy. We will bring you more about Rusty and his collection in the months to come.   Please follow along online as it’s unpacked: http://hevelincollection.tumblr.com/