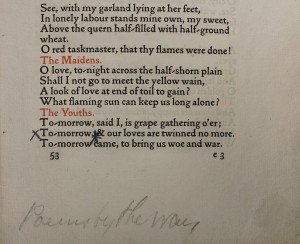 Ask three different people why we remember William Morris, and you just might get three different answers. The social activist might mention his work in leftist politics. The designer might recall—with varying degrees of affection—his vivid wallpapers. The literature professor might quote a few lines of verse from the man who, upon the death of Tennyson, politely refused his country’s Poet Laureateship.

Those of us in special collections, however, best remember William Morris for his pioneering work with the Kelmscott Press. And pioneering is just the word. Morris bemoaned the state of bookmaking in Victorian England. (To be sure, he bemoaned just about anything made by machine.) Put off by the industrialization of book production, he returned to the roots of his craft, adopting as role models some of Europe’s earliest and greatest printers, and even tapping into the manuscript tradition that preceded them. His books were produced entirely by hand. In bucking the machine-made trend, Morris founded what has come to be called the fine press movement.

As you might imagine, Morris was a meticulous printer. Lucky for us, Special Collections recently acquired a rare witness to his attention to detail: twenty-two pages of proofs for his Poems by the Way. A proof is a copy of a text run off the press before the first printing intended for publication. Printers and authors would review the proofs and make needed changes. In this case, William Morris was both printer and author. Poems by the Way was only the second book to come off his Kelmscott Press, and the first in which he used both black and red ink.

Some changes aren’t surprising: a typo corrected, an ampersand spelled out. Others betray a much more careful attention to detail. Compare, for example, the decorative initials below. The letter used in the proof (on the left) and that used in the published version (on the right) are remarkably similar. But to a craftsman like Morris, those nuances were the difference between a good book and a great book. Subtle though they are, the changes we see between the proof and the published text offer a rare glimpse into the process behind some of Morris’s earliest book design.

One thought on “Kelmscott Proof Among Our Recent Acquisitions”