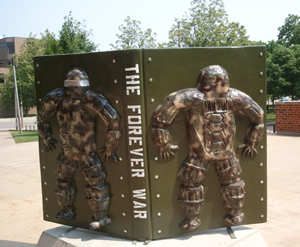 Iowa City UNESCO City of Literature and three Johnson County public libraries unveiled 25 unique BookMark statues FRIDAY, JUNE 3, kicking off what is believed to be the first public art display in the world to celebrate reading and writing. These gigantic statues were created by artists from throughout the Midwest and will be on display now through the end of October in Coralville, Iowa City, North Liberty, and at the Eastern Iowa Regional Airport. Two to four additional statues will debut in July 2011.

The University of Iowa Libraries statue depicts The Forever War by Joe Haldeman. This ground-breaking novel is one of the most influential works of science fiction written in the last 40 years. It was completed while Haldeman was attending the Iowa Writers’ Workshop, and published in 1974 while he was living in Iowa City. He submitted a copy of the first edition as his Master’s thesis.

The Forever War is an oblique depiction of Haldeman’s experience as a soldier during the Vietnam War, and a mind-bending treatment of the concept of time and space, the ways in which human experience is forged by our perception of the times in which we live. In the novel William Mandella is sent many light years across space to engage an enemy species known as the Taurans. Due to time dilation caused by faster-than-light travel, Mandella and his fellow soldiers age two months while time on earth advances by a decade. Haldeman uses this scenario, which most science fiction conveniently avoids, to depict the concept of future shock in tangible terms. The novel becomes a meditative examination of the senselessness of war and the immensity of time and cultural change, with a love story stitching the pieces together on a human scale.

The novel won every major award for science fiction, including the Hugo and Nebula, and it is considered an important work about the Vietnam War. Haldeman wrote two sequels, and the original novel is currently being adapted to film by Ridley Scott. The sculpture, by the artist Jim Kelly, depicts the powered suit of armor that the soldiers in the novel wear, while the interior of the sculpture invites viewers to step inside the suit, by stepping inside the book.

The University of Iowa Libraries is home to one of the largest collections of science fiction fanzines in the world, and this growing body of material is used frequently by faculty, students, and the public for classes, research, and enjoyment. Fanzines document the growth of communities in the pre-internet era, an area of increasing scholarly interest. They are often produced with paper and inks that fade with time, and the Libraries is actively engaged in collecting and preserving these ephemeral pieces for future generations to study—a span of time made easier to comprehend by the writing of novelists like Joe Haldeman.

BookMarks, a public art partnership, is expected to attract many visitors, and shows our community’s spirit for reading, writing, literature, and living in the only City of Literature in the United States. Each BookMark statue is an original collaboration between generous sponsors and talented area artists and designers.   A complete list of sponsors, artists, statues and their locations is attached. A separate map of the statue locations is also included with this information and is available at the BookMarks  website (www.bookmarksiowa.org).

Visitors and families are invited to experience the BookMarks project by touring all of the statues and uploading photos of themselves with each statue at the Flickr Photo Sharing page of the BookMarks website (www.bookmarksiowa.org), or on Facebook (http://www.facebook.com/pages/Book-Marks-Iowa/128608547192443). In addition, the public can vote for their favorite statue through an online ballot starting June 20, 2011 at the Iowa City Press Citizen  website (www.press-citizen.com). Winners of the “People’s Choice Award” will be announced at the Iowa City Book Festival’s Day in the City of Literature on Sunday, July 17, 2011.

BOOKMARKS™ BOOK ART OF JOHNSON COUNTY will benefit the Iowa City UNESCO City of Literature and the public libraries of Iowa City, Coralville and North Liberty, when no fewer than 24 of the statues are sold during a public auction in November. The City of Literature USA is designating its share of the proceeds of this public art project to enhance outreach activities that attract visitors to the area such as the annual Iowa City Book Festival. Iowa City Public Library will direct its share of the contributions to increase its early childhood literacy efforts. The Coralville Public Library will utilize the proceeds to enhance Library programming and augment high-use collections. The North Liberty Community Library will use their portion of the funds toward the expansion and renovation project currently underway. The three public libraries in Coralville, Iowa City, and North Liberty have 95,000 cardholders who visited the libraries more than 1.2 million times last year.

The rest of the world became aware of the area’s literary culture two years ago when Iowa City received the UNESCO invitation to join the Creative Cities Network as one of only three Cities of Literature in the world.

Susan Craig, Director of Iowa City Public Library, made the claim that this community cares as much about literature as it does about football. Once she said it aloud, she envisioned the BookMarks project as a way for everyone in the community to celebrate all forms of reading and literature. Her vision of BookMarks statues—modeled after the highly successful “Herky on Parade” in 2004—was met with enthusiasm by all.