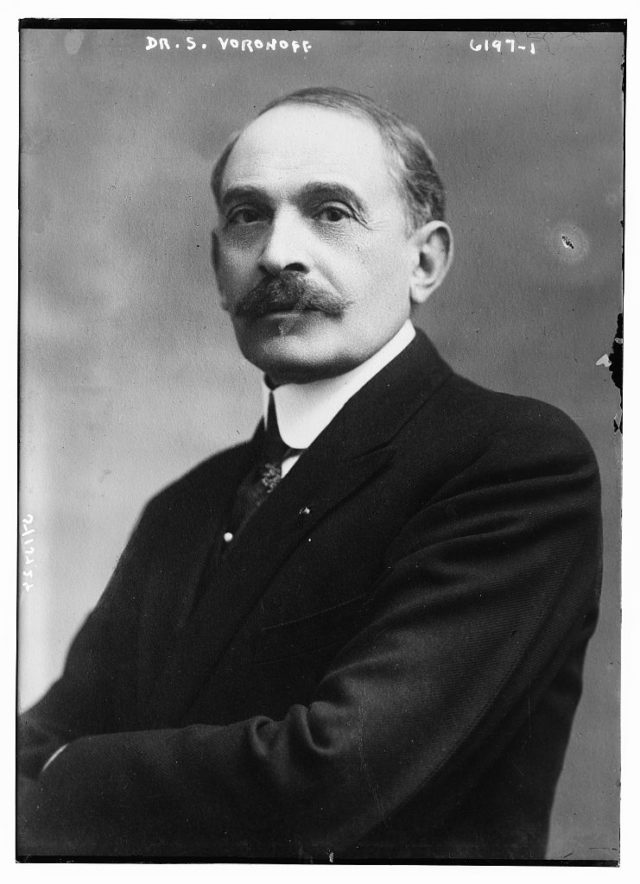 Voronoff was born in Russia and studied medicine in France. He studied with the transplant pioneer, Alexis Carell, eventually becoming a French citizen and setting up his own research and surgical practice. While practicing in Cairo for a time, he reflected on the accelerated aging experienced by eunuchs.

Believing aging and a whole host of associated health conditions could be reversed with testicular transplantation, he set about studying the effects in farm animals. Not unexpectedly, few young men were willing to donate one of their testicles for human transplantation. He began by using the testicles of executed prisoners (he was neither the first nor the last to misuse prisoners in this way), but the demand for his services was too high. He eventually settled on monkeys and apes as the best animal substitute, setting up a “monkey farm” to ensure a steady supply.

To demonstrate the validity of his procedure, Voronoff often published patient testimonials with “before and after” photographs of his patients,  a technique used throughout the 20th Century and now by those peddling “too good to be true” cures. His technique inspired many other surgeons and veterinarians around the world. Thousands of animal-to-human and animal-to-animal sexual organ transplants were performed.

Voronoff was convinced he would eventually be able to create long-lived superhumans and animals. He performed at least one human ovary transplantation into a monkey, including an attempt to impregnate the monkey with human sperm. Most of Voronoff’s patients were wealthy men seeking increased sexual vigor. An increasing lack of evidence and Voronoff’s critics, both in science and the media, finally overwhelmed the work, the discovery of hormones associated with sexual organs in the 1930’s rendered transplantation completely unnecessary.

This book is Voronoff’s major work and has his signature on the flyleaf. It is in good condition, with the cover mostly detached but the text block is intact and in excellent condition. The simple paper covers have darkened somewhat over time due to handling and higher acid levels present in most papers of the time. Contact Curator Damien-Ihrig  (phone 319-335-9154) to view this book or any others from this fascinating (and disturbing!) period of medical experimentation and discovery. In person and Zoom appointments available. 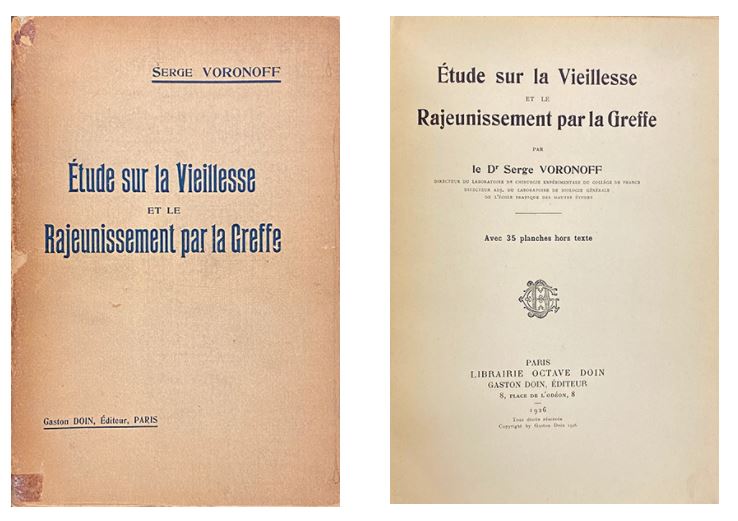