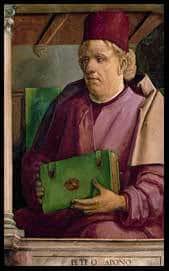 PIETRO d’ABANO (1250-1315?). Conciliator differentiarum philosophorum et medicorum. Venice: Gabriele di Pietro, for Thomas de Tarvisio, 1476.
Pietro d’Abano was an influential man of his time. A Paduan physician, philospher and astrologer, he was in demand for lectures and teaching.  Dante was among his pupils. For his heretical views he ran afoul of the Inquisition, but died before he could be executed.

The Conciliator is his greatest work. d’Abano presents the scattered medical knowledge, particularly from the Arabic and Grecian schools, in a series of questions with answers from both schools of thought.  d’Abano wanted truth to emerge and contradictions be resolved.  Among his important views presented in this book : air has weight, the heart is the source of veins and arteries, and that the brain is the source of nerves which convey sensation. The Library’s copy is decorated with two fine gilt and colored initials. 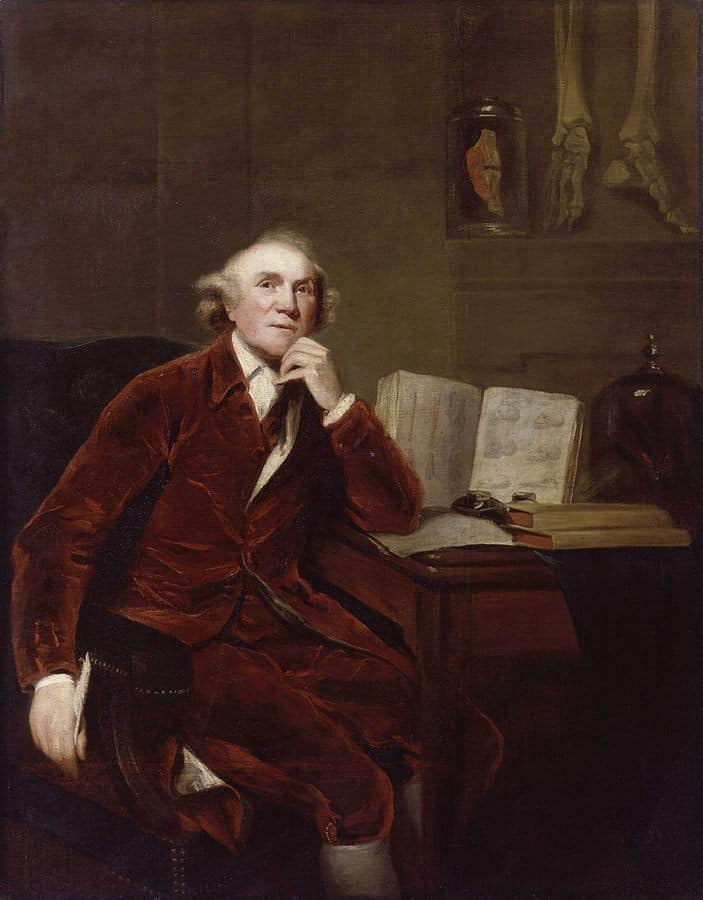 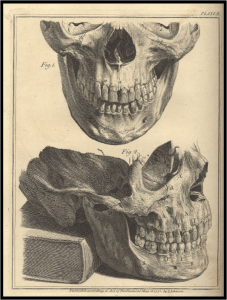 John Hunter was an anatomist and surgeon, practicing in London. His tireless energy helped him to overcome whatever obstacles his educational and cultural lacks may have provided. “Hunter remains one of the great all-round biologists like Haller and Johannes Müller, and with Paré and Lister, one of the three greatest surgeons of all time. . . . Hunter found surgery a mechanical art and left it an experimental science” (Fielding H. Garrison).

One of Hunter’s most important works was this treatise on the teeth. This book was the first scientific study of the teeth and is basic to all modern dentistry. 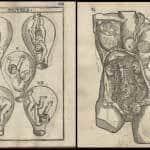 Based on the Latin version, De partu hominis was translated and published by Richard Jonas (fl. 1540).  The next English edition to appear was published by Thomas Raynalde. Raynalde borrowed freely from other authors and included several anatomical plates and descriptive text from Vesalius’ Fabrica. There were over ten subsequent editions of Raynalde’s translation.

English midwives and physicians were largely dependent on this book for guidance in the practice of obstetrics until the Eighteenth Century.  In addition to obstetrics, the book covers infant care, nursing, and the diseases of infancy. Illustrations of the birth chair, the lying-in chamber, and various positions of the fetus in utero are seen for the first time and are the earliest obstetrical illustrations printed from wood blocks.  This book was the first printed English book on the subject of midwifery.

Glisson was a graduate of Cambridge and Regius professor of physic there for more than forty years, although he was almost never in residence, as he carried on a busy medical practice in London.

Glisson was a founder of the Royal Society and one-time president of the Royal College of Physicians. In this book he gives the first description of the capsule of the liver and describes its blood supply. Here, too, is the description of the sphincter of the bile duct.  In its time, the Anatomia hepatis was the most important treatise thus far on the physiology of the digestive system.

Our library owns a first edition of this work, as well as a 1681 edition published in The Hague.  Other editions came out in 1659 and 1665. Glisson also wrote books on rickets and the intestines.  For more information about Francis Glisson see the Oxford Dictionary of National Biography. 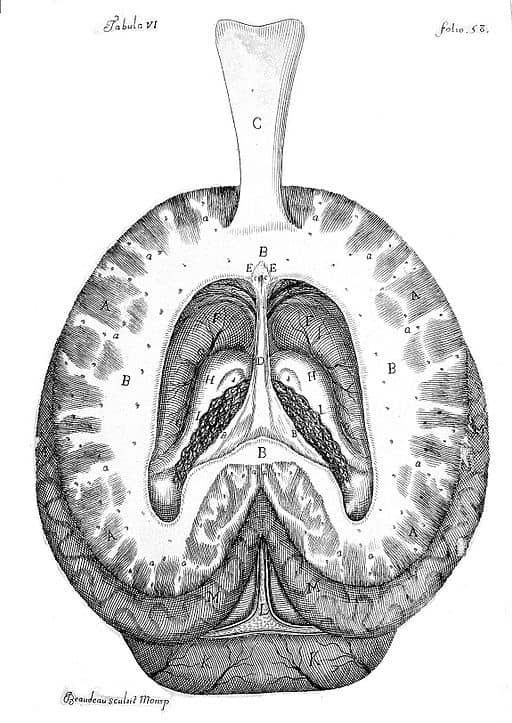 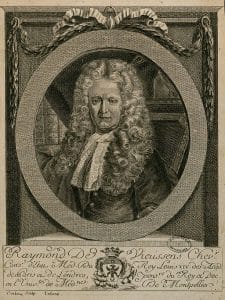 The son of a French army officer, Vieussens provided his own support, studying philosophy at Rhodez and medicine at Montpellier. As physician to the hospital of Saint Eloy in Montpellier,performed over five hundred postmortem examinations.  He made a number of anatomical discoveries during these exams.

This well-illustrated compendium of the anatomy of the nervous system is based on these examinations and provides the most complete description of the brain and spinal cord to appear during the seventeenth century.

Vieussens was one of the first anatomists to dissect out the internal capsule, corona radiata, cerebral peduncles, and the pyramidal fasiculi of the pons. The twenty-two folding copperplates, printed on fine, thin paper, are in excellent condition in this copy. 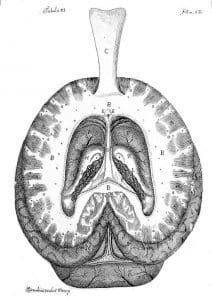 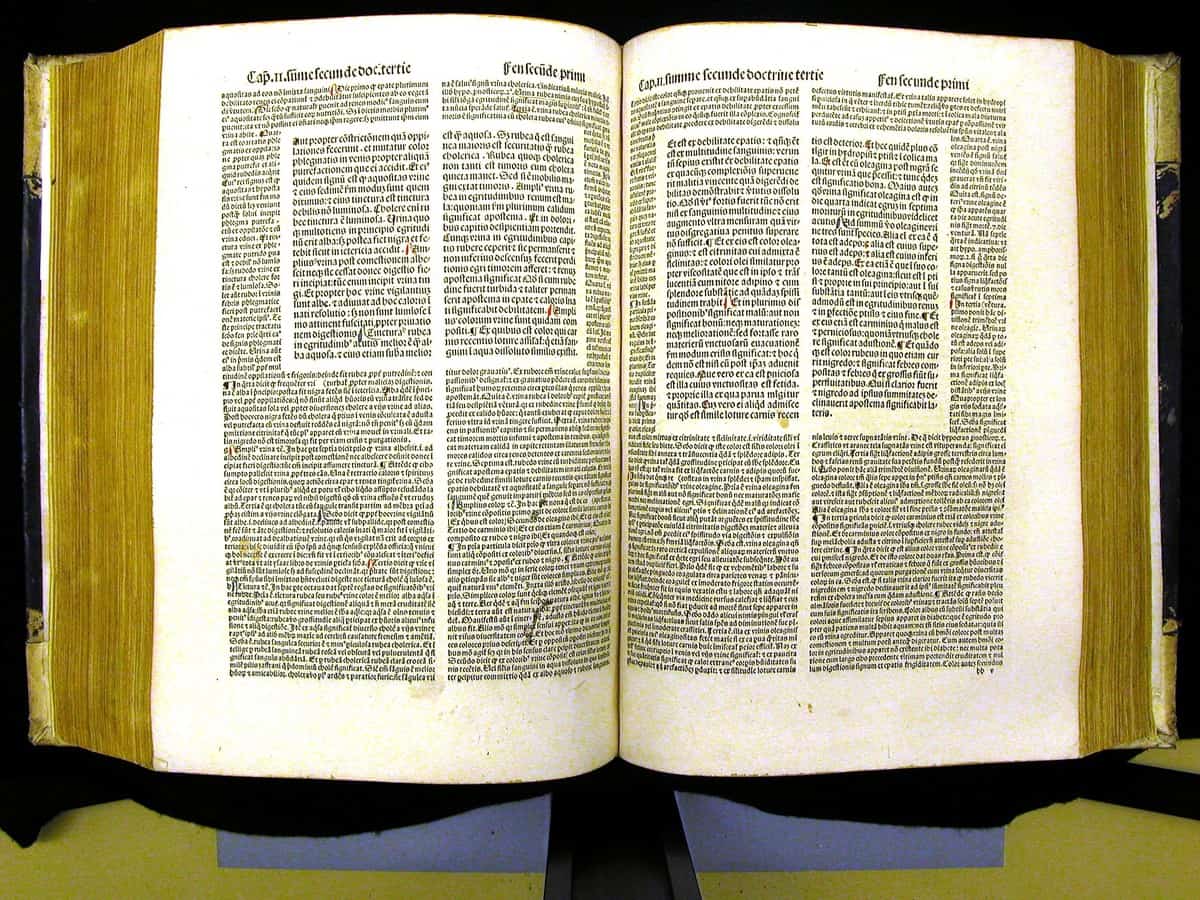 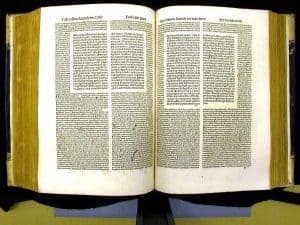 Known in the Persian world as the Chief or the Second Doctor (Aristotle having been the first), Avicenna (Arabic Ibn Sīnā) was an accomplished physician as well as a noted philosopher. He wrote widely on theology, metaphysics, astronomy, philosophy, law, and medicine, and it has been estimated that he was the author of more than one hundred books.

The Canon was his greatest medical compilation and “stands for the epitome of all precedent development, the final codification of all Graeco-Arabic medicine.”  A large encyclopedic work on medicine, it is, for the most part, based on the writings of Hippocrates and Galen although Avicenna included many original observations and noteworthy clinical descriptions. Canon medicinae was a dominant force in medical thought, practice, and writing for more than five centuries.

This massive and beautiful incunable is the first edition of Avicenna to have been printed in France and is a landmark in the history of French printing.

Laguna, a native of Segovia, Spain, began his education in medicine at Paris in 1532. While in Paris he published his first three books and became acquainted with Vesalius.

By 1539,  Laguna published over 30 books, many on medical botany–one of his great interests. This work is one of his earliest and was simultaneously published in Paris by Jacob Kerver.  Laguna notes in the dedication that he spent only three months preparing the work and comments that, in his view, the medical profession of his day had fallen to a very low state.

Written in a forthright manner, the book has a strong personal tone and cites few authorities but generally supports the views of Aristotle and Galen. Laguna begins his anatomy with the mouth because that is where the nutritive process is initiated and finishes with the brain where the spirits receive their complete transmutation. He cites few personal observations or autopsies and adds little to the progress of anatomy.

View a digital version of this book from Complutense University of Madrid. 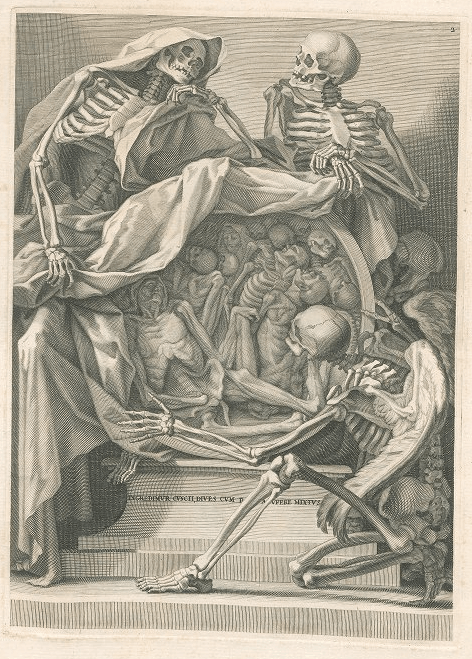 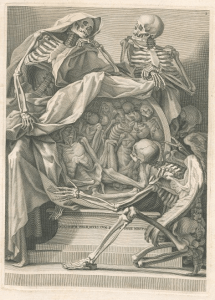 An authoritative anatomist and surgeon in Rome, Genga stressed the importance of solid anatomical knowledge for the surgeon. Genga wrote the first book devoted entirely to surgical anatomy which remained a widely used manual for fifty years.

Genga was one of the first Italians to accept Harvey’s theory on the circulation of the blood, but Genga also maintained that the discovery was made by Colombo and Cesalpino before Harvey. The parts played by those two Italian investigators and anatomists in the unfolding of the facts of circulatory physiology have been a point of study and argument among medical historians.

This large atlas contains 40 magnificent full-page engraved plates depicting the human figure in various poses, with and without dissection. Some of the full-figure plates are engraved renditions of celebrated antique statues in Rome. The plates, probably engraved by François Andriot, were intended primarily for the use of painters and sculptors, and they are still considered to be one of the best collections for the use of student artists. The text is by Giovanni Maria Lancisi. 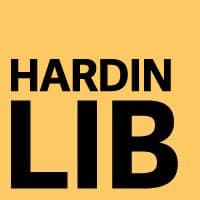 JOHN DIX FISHER (1797-1850). Description of the distinct confluent, and inoculated small pox, varioloid disease, cow pox, and chicken pox. 2nd ed. Boston, 1834
Our copy has six vaccination needles inserted into the margins of two of the pages, seemingly indicating the book may have been used as a treatment room reference tool. 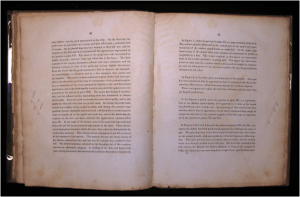 Fisher graduated from Harvard Medical School in 1825 and went to Paris where he spent the next two years studying under Laennec, Andral, and Velpeau. Fisher was present at Massachusetts General Hospital when ether was introduced into surgery and was one of the first to use it during childbirth.

Fisher founded the Perkins Institution for the Blind in Boston, was its physician, and was a proponent of education for the blind. The paintings from which the plates were engraved were made when Fisher was studying at Paris in 1825 and were available for this edition. The delicately colored plates, drawn from life, illustrate the various forms and stages of pox and varioloid disease as recognized by the author. 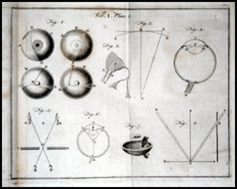 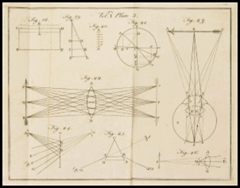 Porterfield was born in Ayrshire, Scotland, received his M.D. in 1717 at Rheims, and by 1721 was practicing in Edinburgh.  Porterfield was made a professor at the University of Edinburgh in 1724 but apparently never taught.

Porterfield devoted himself chiefly to research on the physiology of vision, reporting his experiments and observations in this book. Porterfield’s Treatise was carefully read by all of the subsequent great contributors to ophthalmology and visual science for more than a century after its publication.

One of the most erudite of 18th century medical authors, Porterfield quoted widely from both the ‘old’ and ‘modern’ authors of his day. This  book’s greatest strength, however, lies in numerous original experiments and observations about visual physiology.