This work is perhaps the most monumental and finest anatomical atlas ever published. The plates, although probably derived from Vesalius, were drawn with painstaking accuracy by Wandelaer and are dated between 1739 and 1747. Albinus described in his preface the methods used in the drawing of the skeletons and “muscle men” to achieve symmetry and beauty in each figure. All of the skeletons and “muscle men” have lush background scenes taken from nature which were chosen to animate the figures and emphasize the harmonious and natural beauty of the human body. The first three plates of the skeleton are each accompanied by outline plates. The following nine plates of the “muscle men” also have an additional outline plate. The final sixteen plates represent individual muscles and parts of muscles and each of the many figures is supplied with an outline drawing unless the letters are engraved directly on the finished figures.

Lavater was born in Zürich; he was a poet and a physiognomist. His name would be forgotten but for his work in the field of physiognomy. The fame of his book, which found admirers in France, England as well as Germany, rests largely upon the handsome style of publication and the accompanying illustrations.

The two principal sources from which Lavater de-veloped his physiognomical studies were the writings of the Italian polymath Giambattista della Porta, and the observations of Sir Thomas Browne in his Religio Medici. This pseudo-scientific analysis of the human face, and all the feelings it is capable of expression, was partially written by Goethe, a leading expert in craniology. To defend the science of physiognomy, Lavater drew upon the work of Haller, Herber, Leibnitz and Sulzer. 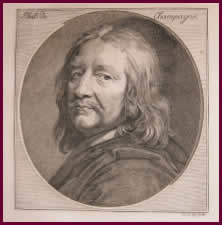 The Univ. of Iowa History of Medicine Society invites you to hear:  Asitha Jayawardena, medical student and winner of the Sparks Essay Contest, speak on  “Expedited Diffusion of Innovation: A reflection on the Ponseti Method in the current era of medicine.”

A cast from the past– Our speaker will describe the history and cultural context of clubfoot and treatments developed by Dr. Ignacio Ponseti.  He will then describe diffusion theory as Ponseti’s treatment spread through the world.

The University of Iowa History of Medicine Society invites you to hear:

Room 401  Univ. of Iowa Hardin Library for the Health Sciences

Tagliacozzi was professor of surgery and anatomy at Bologna. This work, “Concerning the surgery of the mutilated by grafting,” is a classic in the history of plastic surgery and is especially noteworthy for its description of rhinoplasty. Rhinoplasty had been practiced in ancient India and, in the thirteenth century, by a family of itinerant Sicilian surgeons who kept the operation a family secret. The volume is divided into two parts: “Theory of the art of plastic surgery,” and, “Practice of the art,” which describes and illustrates the instruments and operative procedures for restoration of the nose, lip, and ear. Tagliacozzi also fully discussed the complications, such as hemorrhage and gangrene, that often occurred during these operations. 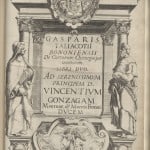 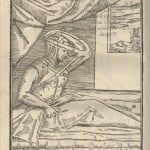 Russell W. Currier, past president of the American Veterinary Medical History Society will speak on:

“2,000 Year History of Scabies:  From Humoral Beliefs to Contagion to Modern Understanding”

The transition from Hippocrates’ humors and Galenic dogma to microscopic causes of illness was a long and distressing experience delaying for centuries the concept of contagion.  Manifestations of scabies infestations were attributed erroneously to systemic phenomena, even digestive disorders. This lecture will present a 2,000 year review of this  wholly human parasite that spread in ‘deep time’ to numerous animal species as variant subspecies.

Gersdorff was a mil 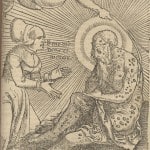 itary surgeon who gained wide experience during forty years of campaigning and was an expert in the treatment of battlefield injuries. His work covers anatomy, surgery, leprosy, and glossaries of anatomical terms, diseases, and medications. Gersdorff emphasized a well-founded knowledge of anatomy because the surgeon was frequently called on to deal with extensive bodily trauma. He derived his anatomy from Arabic authors and works of Guy de Chauliac. The surgical portion of the work was devoted to wound surgery and covers the methods he employed for extracting foreign objects and amputating limbs. He used a tourniquet to control bleeding when amputating and covered the stump with the bladder of a bovine to help control postoperative hemorrhaging. Of special interest are the sedatives and analgesics, although he appears not to have used them in his practice. The section on leprosy is given over largely to remedies for a disease he did not believe could be cured.

The University of Iowa History of Medicine Society invites you to hear:

Stop by to see information on antiquities, medieval practices, the founders of modern dentistry, early dental tools, the early days of the University of Iowa College of Dentistry and much more.

Dental Examination, University of Iowa 1920’s;  Tooth key used to extract teeth from the mid-18th to the early 20th century. 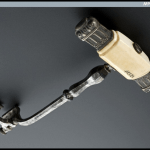 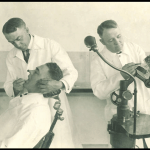 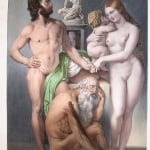 guage. The 726 hand-colored lithographs were executed after drawings by Nicolas Henri Jacob (1781-1871), a pupil of David. Jacob made his drawings from dissections and other anatomical preparations. Bourgery studied medicine at Paris where he interned under Laennec and Dupuytren and won gold medals for excellence from the Paris faculty of medicine and hospital administration. After ten years as health officer at Romilly, Bourgery returned to Paris to continue his career in anatomy and surgery. Bourgery divided his treatise into four parts which covered descriptive anatomy, surgical anatomy and techniques, general anatomy, and embryology and microscopic anatomy. Four volumes of the set are devoted to surgical anatomy and cover in detail nearly all the major operations that were performed during the first half of the nineteenth century.