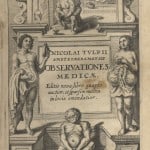 Along with other distinguished anatomists in Holland, Tulp left a rich legacy of anatomical discoveries.  His name is current in the eponym”Tulp’s valve” (the ileocecal valve).  This book contains the first descriptions of beri-beri and of what is probably diphtheria.  Tulp described the condition we know as migraine, the devastating effects to the lungs caused by tobacco smoking, and revealed an understanding of human phychology in a description of the placebo effect.