Recently, the John Martin Rare Book Room acquired a rare copy of Edward Tyson’s 1699 book, Orang-outang, sive, Homo sylvestris, or, The anatomy of a pygmie compared with that of a monkey, an ape, and a man… The book constitutes of the most important works in the history of comparative morphology. 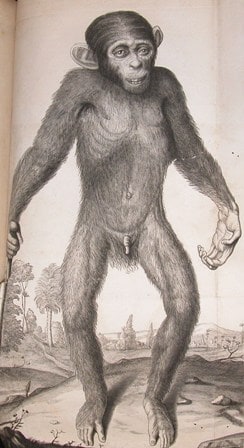 Physician, Edward Tyson, studied at Oxford and Cambridge and was a frequent lecturer on anatomy; he made several important contributions to medicine including the discovery of the sebaceous glands of the corona glandis (“Tyson Glands”). As a hospital administrator, Tyson was responsible for introducing female nurses to Bethlehem Hospital. Tyson’s reputation, however, rests largely with his anatomical studies which, in addition to the present investigation, included the porpoise and the opossum.

The “Orang-Outang” Tyson describes is actually a less than mature male chimpanzee from Angola that died a few months after its arrival in London. Also, his use of the word “Pygmie” denotes a group of small mythical beings whose supposed existence Tyson attributes to sightings of chimpanzees made in antiquity. Tyson’s “Pygmie” is completely unrelated to the name now given to the short-statured groups of people in Central Africa whose existence was unknown to Europeans until the 19th century.

As the first to dissect this species, Tyson noted the great morphological similarity between the animal and humans and termed it “an intermediate link” between ape and man. In doing so, Tyson did not mean to suggest a common lineage or descent but rather was referring to the “links” in the “Great Chain of Being,” the classical conception of a hierarchical universe from the simplest elements through the plants and animals and culminating in humans and finally God.

Tyson writes that the animal is “…of a higher degree above any of [the other apes and monkeys] we yet know, and more resembling a man. But at the same time I take him to be wholly a Brute, tho’ in the formation of the of the Body, and in the sensitive or brutal soul, it may be, more resembling a man, than another other anima; so that in this chain of the creation, as in intermediate link between an ape and a man, I would place our Pygmie.” The remarkable plates are executed in a style very similar to those in Vesalius’ Fabrica further underscoring Tyson’s thesis.

The copy in the John Martin Rare Book Room was once owned by William Musgrave (ca 1655-1721), former secretary of the Royal Society, physician, and noted historian. The skeleton of the chimpanzee dissected by Tyson remains on display at The Natural History Museum of London.
For additional images, click on links.
Musculature
Skeleton