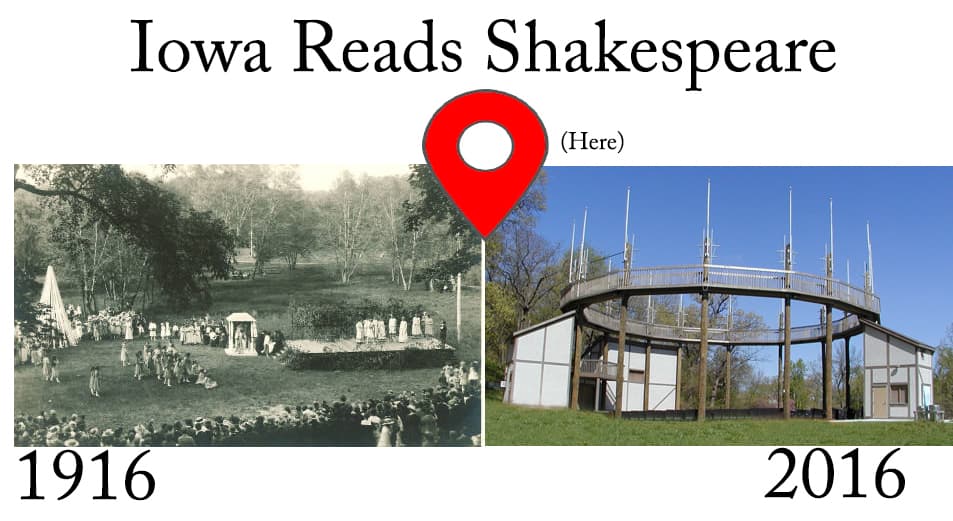 Step up to read Shakspeare and celebrate The Bard’s 400 Death Anniversary – Just like they did 100 years ago in Iowa City, or come and enjoy the show!

A century ago, Iowa City celebrated the tercentenary of Shakespeare’s death. In 1916, the world was at war, and, as always, the arts were a healing salve. People gathered, donned Shakespearean costumes, and paraded to City Park to hear readings from the Bard’s plays.

So here we are in 2016, celebrating Shakespeare’s quatercentenary. We have planned to gather again in City Park. Interesting, isn’t it, that a public theatre-in-the-round now sits where Iowans observed Shakespeare’s last 100th birthday?

On September 24, 2016, we’ll gather at the Riverside Festival Theatre to read Shakespeare. For inspiration, we recall the words of Duke Orsino in Twelfth Night (Act II, Scene IV), “Thou dost speak masterly.”

SO, WE PUT IT TO YOU, FELLOW IOWANS: DOST THOU SPEAK MASTERLY? DO YOU LOVE READING SHAKESPEARE? Demonstrate your acting prowess at the closing event of First Folio! The Book That Gave Us Shakespeare, on tour from the Folger Shakespeare Library.

Here’s how you can participate:

No matter where you live, you participate by voting for a favorite scene from Shakespeare’s plays. The winning scene will be featured along with other live readings of Shakespeare by professionals, community members, and you! The event will also include a costume contest. Gather your troupe, choose your scene from Shakespeare’s plays, and register to deliver your lines on the Riverside Festival Stage at City Park in Iowa City.

This event is part of SHAKESPEARE AT IOWA (August 29 – December 30), a celebration hosted by the University of Iowa Libraries. SHAKESPEARE AT IOWA includes First Folio! The Book that Gave Us Shakespeare, which is a national traveling exhibition organized by the Folger Shakespeare Library in Washington, DC to commemorate the 400th anniversary in 2016 of Shakespeare’s death. It is produced in association with the American Library Association and the Cincinnati Museum Center. First Folio! has been made possible in part by a major grant from the National Endowment for the Humanities: Exploring the human endeavor, and by the support of Google.org, Vinton and Sigrid Cerf, the British Council, Stuart and Mimi Rose, and other generous donors.