We are sorry to note that Earl Rogers, the University of Iowa’s archivist from 1970 to 1998, passed away early Wednesday morning at his home in Iowa City following a brief battle with pancreatic cancer. He was 77.

Earl was born May 2, 1938, in Moline, Illinois. He received the bachelor of science degree in history in 1961 at Iowa State University, attended the University of Wisconsin-Madison as a history graduate student in 1962-1966, and completed his master of library science degree at the University of California, Berkeley, in 1967. After a three-year stint as a cataloguer in the University of Utah Library, he returned to Iowa, joining the UI Libraries’ Department of Special Collections in July 1970 to arrange and index the Henry A. Wallace Papers. Over time, he assumed the role of university archivist. He published numerous indexes and bibliographies pertaining to agricultural and UI history. Among his many noted acquisitions are the Papers of James A. Van Allen, which were processed under his supervision.

Although Earl retired in 1998, he continued to maintain two features on the UI Archives’ web site: our online bibliography of UI history-related materials, and a unique page titled ‘Fiction With an Iowa City Setting: An Updated Checklist.’ Earl would, from time to time, submit new entries or annotations for me to add to these sites.

I always looked forward to hearing from Earl, regardless of the nature of his dispatch, whether it was a new list of entries to upload, a report on his and Susan’s latest trips (Galapagos Islands, Turkey, and New Zealand, for starters), or a review of a new local restaurant. Earl often stopped by our department to drop off an obituary, a clipping, or an article for our vertical file. We appreciated his vigilance, not to mention his subscription to The New York Times.

Earl never second-guessed my decisions as his successor, though certainly on many occasions he had good reason to tap me on the shoulder. I would like to believe it was because he trusted me. More likely, however, it was because he and Susan were having a blast in Peru.

I feel a bit stranded right now. Because of Earl’s remarkable longevity as UI’s archivist – 28 years – and the fact that his position was vacant for over two years until I arrived in 2001, I now have no direct forebear from the archives to call on, no predecessor, whether retired or working elsewhere. Archivists value institutional memory, particularly when shared memory and experience pass from one generation to the next within their shop. Those links inevitably break as time passes.

One last round of web page updates from Earl awaits on my desk. I’ll get to them soon.

Thank you, Earl, and our condolences to Susan and family.

After working in Special Collections for a while, we meet many people who leave a lasting impression on us—collectors, donors of papers, students, and researchers, among others, who devote countless hours to their work in these collections. In the midst of comings and goings, some individuals stand out, and one of them deserves special recognition.

It is with heavy hearts, but also fond memories, that we remember the time we spent with Lucy Hartmann, who passed away on June 22. We got to know Lucy during the time she spent working in Special Collections through the UI REACH program. Lucy was dedicated to her tasks in Special Collections, helping us with filing, sorting, cleaning books, and other duties that helped us to tackle some things that we may not have otherwise been able to resolve. Her contributions to our activities were real and meaningful, and the focus she applied to her work impressed us all. We were able to share some of our favorite items in the collections with her, and were delighted to be able to throw a party for her to commemorate her graduation from UI REACH.

I speak on behalf of the entire staff of Special Collections when I say that she will be missed, that her time with us will not be forgotten, and that her efforts are truly appreciated as we continue to go about our daily business. Her time in our department may have been relatively brief, but the impression she made on us is something that will endure with us for a long time to come.

Over the years that we have been involved with UI REACH, thanks to the efforts of our Department Manager Kathy Hodson, we have been fortunate to be able to work with, and learn from, people such as Lucy and former students Alex and Jeff. We look forward to continuing this relationship, and to remembering Lucy by extending opportunities to more students in the future.

Yesterday I walked into a meeting to discuss an upcoming exhibition we are putting together on World War II. On the book truck I pushed in front of me were several boxes from the papers of Stewart Stern. Stern was a World War II veteran, a survivor of the Battle of the Bulge, who went on to a long career as a Hollywood screenwriter (of films such as Rebel Without a Cause) and a teacher. My colleague who greeted me saw the boxes and said that Stewart had passed away, at the age of 92.

My heart immediately sank. Just this past summer Stewart had visited us from his home in Washington state, making the drive across the country with his wife. He came to visit us in the library where his papers are housed, to answer some lingering questions he had about his work that only his own papers could answer, and to see where his legacy was cared for. The visit with Stewart was the kind of occasion that makes this job among the most meaningful occupations a person could have—sitting with someone like Stewart, listening to his stories about Jimmy (James Dean), his days as an actor in theatrical productions at Iowa, about his friends from the war, experiences that still made him choke up so many decades later. He was thrilled to see his papers, and he was so full of life. When I asked if I could take his picture in the stacks as he surveyed his boxes, I thought I would get a nice shot of him smiling. Instead, as I pointed the camera, he sprang into action, sweeping his arms open to proudly display his life’s work. He laughed like a child.

After this meeting with Stewart, I thought about how enjoyable the experience was, and how much I looked forward to seeing him again. The sadness in knowing that will now not be possible is tempered by the knowledge that he entrusted us with his papers, and we have the ability, and the responsibility, to tell others of his accomplishments. This summer a piece or two from Stewart’s wartime papers will be on display in the University of Iowa’s Mobile Museum—please visit us if we are in your town, and help us remember the life of a fascinating man.

The U.S. launched its first satellite, Explorer I, on this day 55 years ago, on January 31, 1958. Under the direction of Prof. James A. Van Allen of the University of Iowa’s Department of Physics, the satellite carried a payload of data-gathering equipment which eventually revealed the presence of radiation belts encircling the earth.

Our observation of this anniversary is bittersweet this year, as one of the Explorer I team’s most dedicated developers, George Ludwig, died at his Winchester, Virginia, home on Jan. 22 at the age of 85.

George Ludwig was a doctoral candidate working on the project with Prof. Van Allen at the time, and he kept a journal chronicling the events. In his entry made at 3:30 a.m. on Saturday, February 1, 1958, he declared:

“Success!! The first U.S. satellite is in orbit. It looks like a good one. … At about 12:41 (Eastern Standard Time) west coast stations started reporting signals. So it was around the earth once! … And so to sleep – the end of a beautiful day.”

Mr. Ludwig, a Johnson County, Iowa native who completed his doctoral dissertation in 1960, went on to a distinguished career with the Goddard Space Flight Center, and later helped lead the effort to establish the National Earth Satellite Service during the 1970s. In 1981 he became director of the National Oceanic and Atmospheric Administration’s Environmental Research Laboratories, a position he held for two years before returning to NASA. He retired in 1984.

His papers are now housed in the University Archives. In addition, the original data he gathered and analyzed from Explorer I, the first scientific data ever transmitted from space, is being digitized and will be made available online in its original raw form. Mr. Ludwig was part of a small, select group of space exploration pioneers whose research laid the foundation for today’s understanding of our planet, our solar system, and beyond. 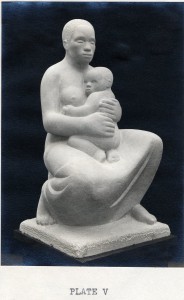 The New York Times reported today that “Elizabeth Catlett, whose abstracted sculptures of the human form reflected her deep concern with the African-American experience and the struggle for civil rights, died on Monday at her home in Cuernavaca, Mexico, where she had lived since the late 1940s. She was 96. “
Elizabeth was among the first three students to be awarded the MFA degree at the State University of Iowa, and the first African American woman. Her 1940 thesis is in the University Archives; it is a discussion of her sculpture in stone, “Negro Mother and Child.” SUI (as it was known until 1964) was the first public university in the U.S. to accept creative works in lieu of written theses for the Master of Fine Arts degree.

Here’s a link to the New York Times obituary. http://www.nytimes.com/2012/04/04/arts/design/elizabeth-catlett-sculptor-with-eye-on-social-issues-dies-at-96.html