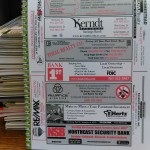 The Map Collection sent out a call to the Auditors of Iowa Counties for current plat books to update our collection. So far, over 40 counties (of 99) have donated current and back issues of plat books for our collection!  Thanks Iowa!

“Re-membering the Wilton Processional: a Manuscript Lost and Found” 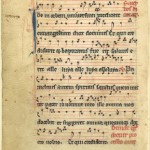 This talk concerns a notated leaf of an English medieval manuscript held in the Special Collections of the University of Iowa Libraries. Musical, textual and codicological evidence supports the identification of the leaf as a fragment of a processional from Wilton Abbey, an important center for women’s Latin learning from its tenth-century foundation to its sixteenth-century dissolution. The recovery of the University of Iowa leaf, along with more than thirty others, provides a window into the abbey’s musico-poetic tradition, its processional liturgies, and its dramatic rituals.

Individuals with disabilities are encouraged to attend all University of Iowa sponsored events. If you are a person with a disability who requires a reasonable accommodation in order to participate in this program, please contact the sponsoring department or contact person listed in advance of the event. 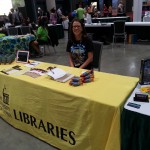 The World Science Fiction Convention is going on this week in Spokane, Washington and Special Collections has a table in the dealer’s room to talk to the fans about our Hevelin Collection fanzine digitization project.

Want to stay up to date on our project digitizing 1930s-1950s fanzines?  Follow the Hevelin Collection Tumblr or read our FAQ page. 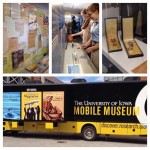 Over 5,000 people have already checked out the Over Here From Over There: Iowans in World War II exhibit in the Mobile Museum at the State Fair as of Wednesday. The fair continues through Sunday, August 23rd so check out the exhibition if you head out to the fair this weekend.

Recently on the Web and Social Media: 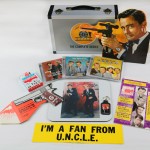 Last week to coincide with the release of the Man From U.N.C.L.E. movie, we featured a post here on our blog with an overview of our related collections and some information about the history of the show and also a related post on our Tumblr about memorabilia in the collections.

2. An Exquisitely Illustrated Lutheran Theological Text Was Featured on Tumblr 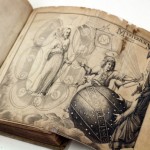 This theological text was written by Jacob Boehme (Jakob Böhme), a Lutheran theologian. The majority of his writings concern the nature of sin, evil, and redemption. These themes can be seen in some of the detailed images.

View the post with many more illustrations here, or stop by the reading room on the 3rd floor to take a look! 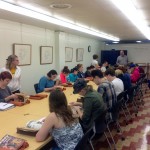 So far this fall, we have 25 faculty members working with us to bring their classes into special collections.

You can too! Sign up using our form: http://www.lib.uiowa.edu/forms/speccoll_class/ 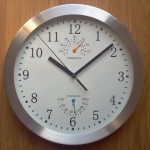 Our new hours are:

In September of 1964, a new series premiered on American television. It was a spy series influenced by Ian Fleming’s James Bond novels and the films that began with 1962’s, Dr. No. I was eleven years old at the time and couldn’t wait to see it. America had caught spy fever and television and Hollywood were feeding demand. The show was called, The Man from U.N.C.L.E., and it was a major hit, the source for what is widely recognized as the first real media fandom, two years before the debut of Star Trek and Trekkies. This fandom grew and sustained itself from the 60’s through to the present, rewarded with a new film interpretation that seeks to cash in on both Boomer nostalgia and the current fascination with hyper-lethal, shadow agent heroes.

We are fortunate to hold the papers of the executive producer and co-creator of The Man from U.N.C.L.E., Norman Felton, in the University of Iowa Library’s Special Collections http://aspace.lib.uiowa.edu/repositories/2/resources/271. As a kid, I ran around the house with my U.N.C.L.E. gun and my U.N.C.L.E. communicator and glued myself to the screen when the show aired. Not content to be mere consumers, many teens began newsletters and fan clubs. Teenage girls were an enormous share of the show’s audience and were particularly smitten with the show’s English actor, David McCallum. He played agent Illya Kuryakin, a cool, cerebral opposite to his partner Napoleon Solo’s suave man-of-action, played by American actor Robert Vaughn (The Magnificent Seven, The Young Philadelphians). Vaughn’s character was the show’s ladies’ man but it was McCallum that pulled in record-breaking fan mail, more than Clark Gable at his most popular.

By 1966, the show was a huge success and the stars of the series were on a promotional tour. They travelled to New York to appear at Macy’s department store. They were to drive their limo straight into a freight elevator and go up to meet the fans, but it was not to be. 15,000 teenage girls showed up and quickly became unmanageable. It was decided to cancel the appearance. When they learned of the cancellation, the girls rioted, doing extensive damage to Macy’s with a few injuries as well. The police influenced Vaughn and McCallum to return immediately to the West Coast. McCallum later vowed to never appear at an American promotion again, fearing that fans or he himself would be injured. This devotion didn’t end when the series was finished in 1968. It expanded into more clubs, newsletters, conventions, and fan art and fan fiction. One of those fans was Lynda Mendoza and we are privileged to have her fine collection of David McCallum fan materials http://aspace.lib.uiowa.edu/repositories/2/resources/778.

With the new film, U.N.C.L.E. returns to center stage in pop culture. I‘m currently binge-watching the first season of the series on DVD, enjoying it and watching with a more critical eye than I did fifty years ago. The show alternates between a self-reflexive campiness and a realism that makes it palatable to a contemporary audience. Interestingly, in light of the huge McCallum fandom, the Kuryakin character makes only intermittent appearances, sometimes not at all. Perhaps this peekaboo added to the hunger teens felt for McCallum. He was often referred to as “the blond Beatle” because of his hair. He is still acting, in the hit series, NCIS, as is Robert Vaughn, seen recently on Law and Order: Special Victim’s Unit.

Among the fan-related and series-related material in the two collections are letters from Felton to and from Ian Fleming regarding the series and a letter from Felton explaining that he sent his papers, including scripts, correspondence, photos, business records, advertising, etc. to the University of Iowa so that fans would leave him alone and could come to a central location to see the treasure. In the Mendoza collection, there are card and board games, fan t-shirts, convention materials, fan correspondence, newsletters, and a wealth of merchandise and memorabilia.

Want to get started exploring Man From U.N.C.L.E related collections in the University of Iowa Special Collections?

Scripts, photos, memorabilia, and documentation relating to the making of the Man From U.N.C.L.E, its reception, and its fan communities from the series’ executive producer Norman Felton.

Collection of materials related to the actor David McCallum, assembled by the president of his official fan club.