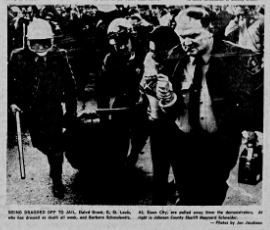 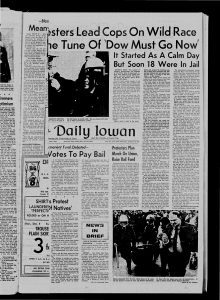 Tuesday, December 5, marks the 50-year anniversary of what was to that date the largest anti-war protest on the UI campus. Over 200 demonstrators gathered outside the Iowa Memorial to protest the presence of Dow Chemical representatives who were on campus to interview prospective employees. There were 18 arrests and the day’s events ushered in a new era of protest, both locally and nationally. Less than four months later, President Lyndon B. Johnson, citing eroding public support for his administration’s policy on Vietnam, announced he would not seek re-election to another term.

The day’s events were filmed and recorded by Robert Coover, an assistant professor of English, whose documentary is featured on our online exhibit, “Uptight and Laid-back: Iowa City in the 1960s.” To view the film in the online exhibit, go to https://dsps.lib.uiowa.edu/sixties/, scroll to videos, and click ‘On a Confrontation in Iowa City.’