Aldus Manutius was born in Italy during the Italian Renaissance.  He became the leading printer of his time and is responsible for many literary accomplishments, including the invention of italic type for use in a printing press and the semicolon.  Most importantly, Manutius was one of the first people to publish small, pocket editions of books that more people could actually afford.  This month, we’ll be featuring a few of the books in our collection which were published by this incredible scholar on our Tumblr, so we thought we would give you all a little more background information.

Manutius’ goal was to preserve ancient Greek literature by printing personal, usable editions for everyone to own.  He accomplished this by organizing the famous Aldine Press.  Through the Aldine Press, Manutius was able to produce the first printed editions of many Greek and Latin classics.  These included works such as The Odyssey, The Iliad, and The Divine Comedy.  Aldus Manutius’ work is always recognizable by the colophon (or inscription, which gives details about the book, usually found at the end of a work), which pictures a dolphin wrapped around an anchor. 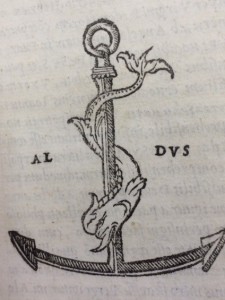 Here at the University of Iowa Special Collections and University Archives, we are honored to house such an incredible collection of his works.  Keep an eye out for posts about Manutius on our Tumblr, as well as other social media.  If you have any questions about these items, feel free to ask us on our social media, or email us at lib-spec@uiowa.edu.

*Photo of Manutius from www.aldussociety.com