I cannot begin to tell you how I got started working with the Sterns Family Papers.  But I can tell you that before opening those three boxes, I had a below-average interest in the civil war.  Having gone through the American public school system, I learned about the civil war at least once every school year until about the 11th grade.  It was as if each teacher was afraid that somehow, that lesson had been skipped the previous year.  While there was certainly some more information added to the lesson each year (like that dark time when we learned it was really all about the economy), the lessons surrounding the civil war largely stayed the same.  North vs. South, freedom vs. slavery, brother vs. brother.

Enter, Thomas Rescum Sterns: a real, live, Civil War soldier who fought for the Union.  Sure, he’s no Abraham Lincoln, but he was a citizen of the United States with a farm, a family, and a job, teaching the third grade in Wisconsin.  Thomas wrote letters to his wife, Lavinia Sterns, during his time as a soldier, and these are being preserved in our civil war letter collection.  When I stumbled across these letters, I became absorbed by them.  I couldn’t stop reading.  Here were letters written by someone who was experiencing the events, firsthand, that I had only read about in textbooks.  It was like watching a movie, or reading a novel about the civil war, except it was real, interesting, heart wrenching, and hilarious.

“I take the pleasure of writing a few lines to you…” is how Thomas Rescum Sterns started his lengthy series of correspondence to his wife.  Thomas wrote about the sickness he observed, and later experienced, in the camp at which he was stationed.  He wrote about the progress of the war, and how, due to his location, Lavinia probably knew more about it than he did.  But most importantly, he wrote about hardtack: that stale bit of cracker they were all subsisting on, and Thomas took it in stride, but didn’t hesitate to crack a few jokes about the civil war staple. 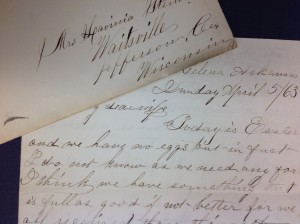 “Oh! yes a few words about our fare. As I told you in my other letter our bread is principally crackers. A day or two ago Dolph had been to dinner eating crackers of course. We found one that was marked 1801 and another the date being still earlier. It being made in Nazareth B.C. 36. You may judge whether they are old and hard or not. You need not be afraid of my getting killed by the enemy’s bullets for this reason. Just before I go into battle, if such may be the case, I shall fill myself as full as possible with these crackers which of course are hard and then I shall oil my belly and of course if the bullets strike me then glance as though they had struck an ironclad gunboat” (Nov. 12, 1862).

And I suppose that’s how I fell in love with this collection.  Thomas Rescum Sterns reminded me that history is about the individual.  The ability to personalize history is such an incredible opportunity provided by our collections, and it has truly reignited my interest in our past.

So if you feel like you’re in a historical rut, check out this collection, and more on the Iowa Digital Library’s website.

And if you’d like to see more about Thomas Rescum Sterns, check out our Tumblr series, or this great article written by a former head of Special Collections and University Archives.