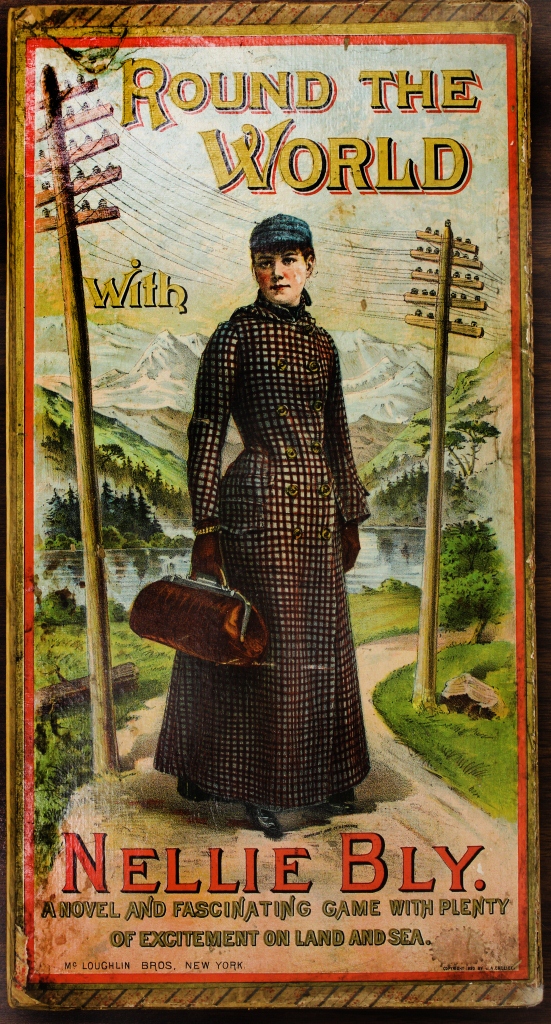 Round the World with Nellie Bly is a Victorian-era board game housed in Special Collections & University Archives.  McLoughlin Bros., New York, published the game in 1890 in celebration of her circumnavigation of the globe in record time, made from November 14, 1889 to January 25, 1890, exactly 123 years ago today.

Nellie Bly was the pseudonym assumed by Elizabeth Cochrane (1864-1922), a reporter for The New York World newspaper.  Bly proposed the journalistic stunt to Joseph Pulitzer, owner of The World, because she preferred to report on this journey rather than be relegated to write the “ladies” page of domestic topics.  She was inspired to propose the journey after reading Jules Verne’s 1873 novel, Around the World in Eighty Days, and set out to beat the record of the fictional character, Phileas Fogg.

The public invested in her success by submitting their guesses of her final time in a contest held by Pulitzer, as well as through purchasing The World to read the progress reports she had telegraphed to the news office.

We can follow Bly’s journey on the board game as she steamed from New York harbor (some sources cite New Jersey) to England and on to Amiens, France, where she was personally encouraged by Jules Verne.  From there she travelled by train to Italy.  Next, she steamed through the Suez Canal to Pakistan and Ceylon, then to Hong Kong and Japan, before sailing to San Francisco.  The board depicts the Atchison, Topeka and Santa Fe Railway engine and single car Pulitzer hired to whisk her from San Francisco to Chicago in the record time of 69 hours.  Her slower modes of transportation included rickshaw and camel.  The gamers of 1890 would spin the dial and hope to avoid certain squares on the board which saddled them with delays similar to those Bly encountered, such as waiting for a ship to depart.

Finally, 72 days, 6 hours, 11 minutes, and 14 seconds after she embarked on her strenuous journey, Bly was mobbed in New York by a crush of revelers on January 25, 1890.  Perhaps the game was published prior to Bly’s arrival in New York, because day 72 has her situated in Chicago.  The person with the winning entry received a trip to Europe.  Nellie received her place in history – for this feat as well as other impressive accomplishments. 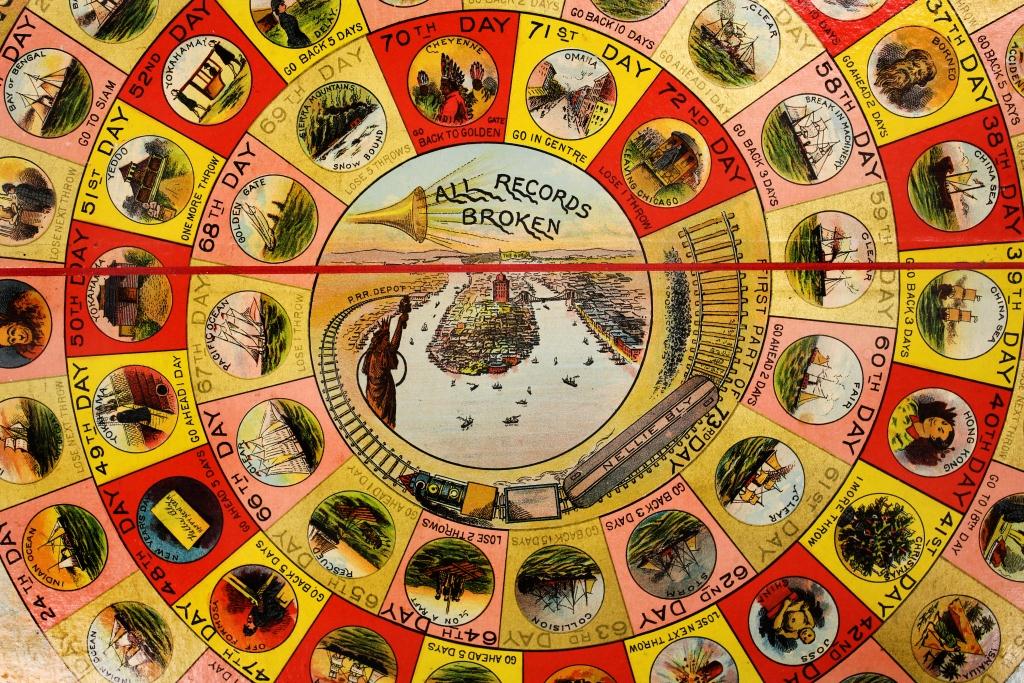