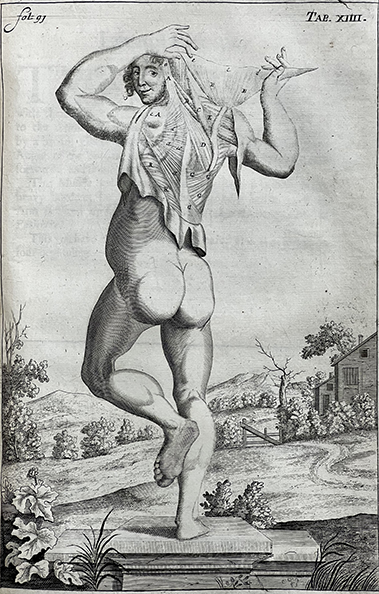 BROWNE, JOHN (1642-1700) Myographia nova, or, A description of all the muscles in humane body : as they arise in dissection : distributed into six lectures ; at the entrance into every of which, are demonstrated the muscles properly belonging to each lecture now in general use at the theatre in Chyurgeons-Hall, London, and illustrated with one and forty copper plates, accurately engraved after the life, with their names on the muscles, as much as can be expressed by figures, as also, with their originations, insertions, uses, and divers new observations of the authors, and other modern anatomists. Together, with an accurate and concise discourse of the heart, and its use, as also of the circulation of the blood, and the parts of which the sanguinary mass is made and framed, written by the late Dr. Lower. Printed by Thomas Milbourn for the author in 1697. 53 cm tall.

John Browne (1642-1700) was a 17th-century English surgeon and anatomist. He was royal surgeon to Charles II, James II, and William III. Under Charles II, Browne first came to observe the “King’s Evil,” or scrofula (cervical lymphadenitis), a disease related to tuberculosis that inflames and swells lymph nodes in the neck. Some thought that the touch of royalty could heal the disease, and Charles II performed many of these ceremonies. Browne vividly described the disease and ceremonies in his Adenochoiradelogia, printed in 1684.

With a recommendation from the King, Browne was appointed a surgeon at St. Thomas’s Hospital in 1683, where he trained. The Governors who oversaw the hospital, led by the Whig politician Sir Robert Clayton, disliked the freewheeling behavior of its surgical staff. The surgeons at St. Thomas felt unburdened by hospital policy because of their support by the King. However, Clayton and the Governors saw it differently and in 1691 dismissed the entire surgical staff, including Browne.

However, Browne was most well known as a serial plagiarizer and shrewd businessman. Most famously, Browne borrowed directly from the works of Giulio Casseri and William Molins for his 1675 and 1681 editions of, A compleat treatise of the muscles, as they appear in humane body, and arise in dissection. Fellow surgeon and author James Yonge heavily criticized Browne for his literary poaching.

In response, in 1697, Browne put together this book, a work that exemplified his approach to writing and selling books: he made a few tweaks to A compleat treatise… and released it under a new title.