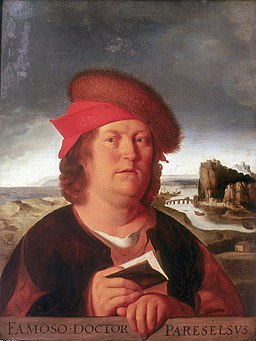 Philippus Theophrastus Bombastus von Hohenheim is universally known as Paracelsus. He was born in Switzerland and educated at Basel. Paracelsus unorthodox ideas and teachings put him in conflict with the orthodox establishment of his revolutionary time and he spent most of his life wandering through Europe as an itinerant physician, chemist, theologian, and philosopher.

Paracelsus ideas were still bound up in alchemy and astrology, and his writings imbued with a mysticism which makes them difficult to interpret.  Paracelsus was usually in advance of his time in the area of practical medicine and attracted many followers. First, he applied chemical techniques to pharmacy and therapeutics. Secondly, in his medical teaching he abandoned the ruling system of humours. Paracelsus believed illness was from a body being attacked by outside agents. He administered specific medications for specific illnesses instead of common cure-alls.

Paracelsus influence on the Sixteenth and Seventeenth centuries was profound and the work of Helmont is unthinkable without him.  Paracelsus is also credited with creating the terms chemistry, gas, and alcohol.