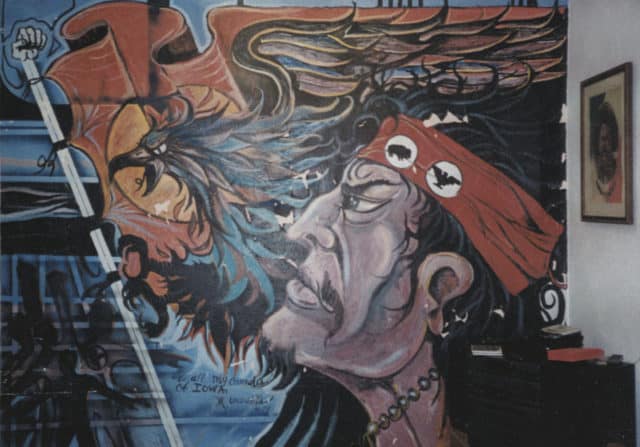 A mural in the Latino Native American Cultural Center (LNACC) has both a celebrated and a controversial past. In their Main Library Gallery exhibition, Building Our Own Community: 50 Years of the Latino Native American Cultural Center, Founded by Chicano and American Indian Students in 1971, co-curators Rachel Garza Carreón and Christopher Ortega have placed the mural’s story quite literally front and center in the gallery.

In April 1974, the Chicano Indian-American Student Union (later the LNACC) at the University of Iowa hosted a two-day series of lectures, workshops, and performances in Iowa City. Chicano Conference ’74 was held in the Iowa Memorial Union. The purpose of the conference was “to create an awareness of, and to eradicate, the educational policies and social attitudes in both public and private sectors which have denied Chicanos their full rights as citizens, their enjoyment of liberty as a people, and their freedom as human beings.” As part of this gathering, an exhibition of art by Manuel Unzueta was presented. Mr. Unzueta, an internationally acclaimed Chicano artist, traveled to Iowa City for the conference from his home in Santa Barbara, California, where his many murals even now continue to inspire conversation and have become an important part of the area’s history.

During his stay in Iowa City, Mr. Unzueta visited the LNACC’s new location at 308 Melrose Avenue. He decided to paint a wall mural as a gift to the LNACC.

According to a Daily Iowan article from 2001, the mural was a “spontaneous product of a lively gathering at the center” in which students had an opportunity to meet with the artist. For years afterward, the mural was an energizing presence. It was the backdrop for crucial conversations, early activism on campus, social events, and community celebrations.

Over time, the mural began to show signs of deterioration. A local Chicano artist was hired in 2001 in an effort to restore it. The resulting changes, however, were polarizing. In the exhibition, Rachel Garza Carreón and Christopher Ortega explain that “these alterations were controversial because some community members felt that they changed the overall tone of the original mural.” During the restoration, “they altered the original in ways that had not been discussed beforehand, including changes in color and the removal of the original artist’s name and dedication (‘To all my carnales of Iowa. M. Unzueta, 1974’).” While many lamented the loss of the original mural, others in the community expressed gratitude to the artist working to improve its condition and help maintain the LNACC.

While the mural looks quite different today than it did in 1974, it continues to contribute to the atmosphere of community at the Center. Its story is an important part of LNACC history.

In the Main Library Gallery exhibition, the curators have placed a replica of the original mural in the center of the gallery. If visitors look closely, they will see that it consists of hundreds of photos from the LNACC over the years.