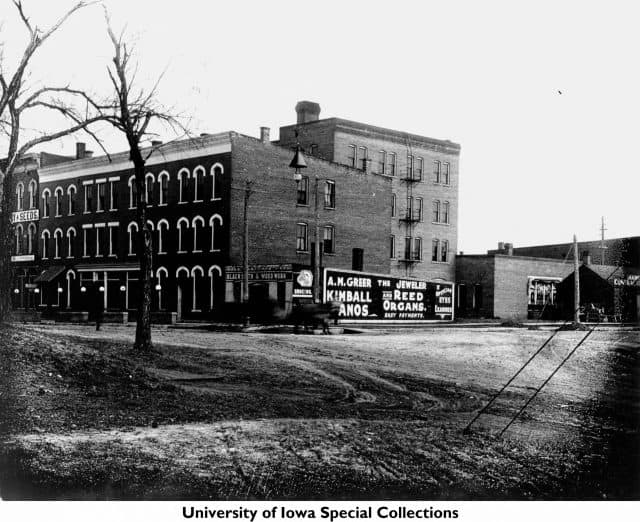 Along with our ancestors, horses helped build Iowa City, the state, and the nation. In the process, they profoundly shaped human identities. The current Main Library Gallery exhibition, The Pull of Horses on National and Local Histories and Identities, explores the physical and social impact of these huge, powerful animals by screening on a loop the original documentary film The Pull of Horses in Urban American Performance, 1860-1920 at life-sized scale amid displays of local and national equine history. The exhibition contains glimpses of Iowa City town and campus life, as well as national equestrian culture – especially as multitudes of women took up the sport of riding and advocated for suffrage.

In celebration of this Main Library Gallery exhibit, the University of Iowa Libraries is pleased to answer this intriguing question for the curious person wandering around downtown Iowa City:

It is important to first understand the demand for these businesses. By 1900, according to the Decennial U.S. Census, the state of Iowa was home to 2,231,853 humans and 1,268,000 equines. In Johnson County, out of 24,753 humans, 9,773 were classified as urban, with most of those humans—7,987—concentrated in Iowa City. Equines numbered 18,493 in the Johnson County, with 1,602 living in urban areas. Given the high concentration of urban human population in Iowa City, most of those 1,602 equines were likely living here as well—around 1,000 would be a fair estimate.

To find out which buildings contained horse-related businesses, the curators turned to Sanborn maps and local business directories. Sanborn Fire Insurance Maps provide helpful insight when researching the history of an area. The Sanborn Map Company published detailed maps of U.S. cities and towns, which allowed fire insurance companies to assess the fire risk of each building. Overall, these maps show the locations and types of businesses by year, along with structural information.

There are 186 stables depicted in downtown Iowa City alone in 1899, according to the entirety of that year’s Sanborn Fire Insurance Map. Many of those stables are shown connected to businesses, while others are connected to private homes. Stables are prominently marked with an “X” across the footprint of each building. Most accommodated multiple equines, and the largest, Foster, Thompson, and Shuck Livery (later Foster, Graham, and Schaffer Livery), at 217-221 East Washington Street (current site of The Englert), would have accommodated several dozen. The quantity and placement of all these Iowa City stables give a sense of the extent to which horses were embedded in human life. Other key businesses needed to support working equines are also visible on the map, notably blacksmith shops, harness and saddlery shops, carriage and wagonmakers, feed stores, and veterinary surgeons.

The Main Library Gallery exhibition includes reproductions of the original 1899 Sanborn Fire Insurance Maps of Iowa City in their entirety, and calls out specific locations that correspond with images found in the archives at the University of Iowa Libraries and the State Historical Society of Iowa in Iowa City.

For those ready to tour downtown Iowa City looking for these historically horsey buildings (or former building sites in many cases), the particular map sections emphasized in this blog post are from the 1899 Sanborn Fire Insurance Map of Iowa City. Horse-related businesses are highlighted by virtue of their addresses listed in the 1899 Iowa City business directory. Some locations are approximate due to the changing landscape of downtown Iowa City over the years, but all featured establishments include the names of businesses housed there in 1899 and at the time of this post in 2020.

The Pull of Horses on National and Local Histories and Identities will be on display in the Main Library Gallery through March 29, 2020.

Text describing the maps below is available by request.