Visits to our web pages typically drop over the weekend, so we were very pleasantly surprised this morning to see traffic for our crowdsourcing site, DIY History, up almost 2000% thanks to an entry on the link-sharing site MetaFilter. Even better than the statistics are the hundreds of newly transcribed pages, including the one below featuring a grisly recipe for stewed calf’s head (“let the calfshead be split open and cleaned…”), now available for full-text searching.

We’re on the waiting list for a MetaFilter account so we can provide belated responses to some of the comments, but in the meantime let us state here that: (1) we are definitely interested in adding more manuscript cookbooks to the project, please get in touch with our Special Collections department if you have one you’d like to donate; and (2) the cookbook collection does indeed date back to 1600, we’re still in the process of digitizing everything, but we just bumped this item with its “records of pasley, and preserbes, wax work and Limning & fruits Artificial” to the head of the queue — all of you Elizabethan handwriting fans, check back soon! 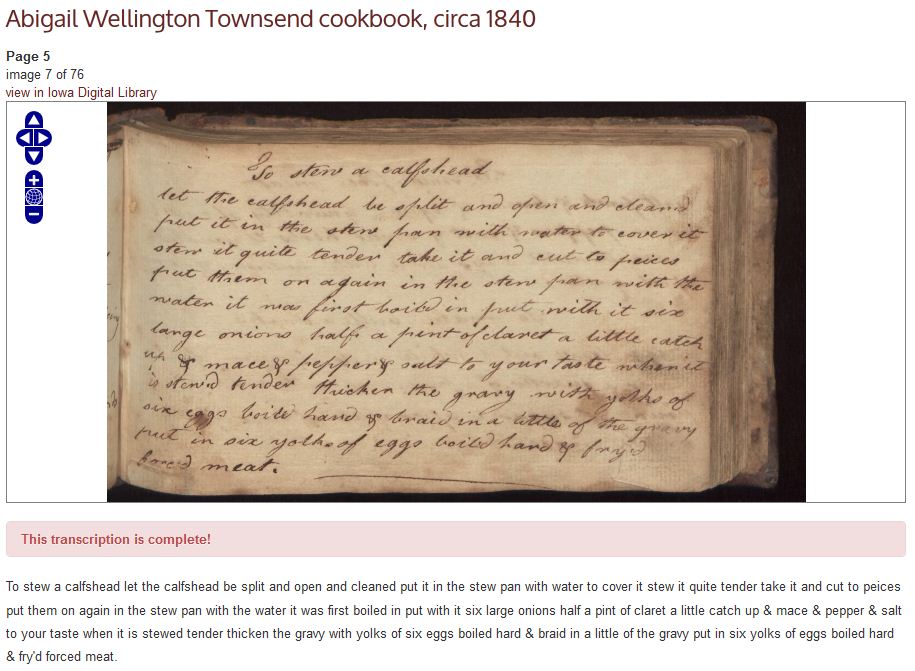 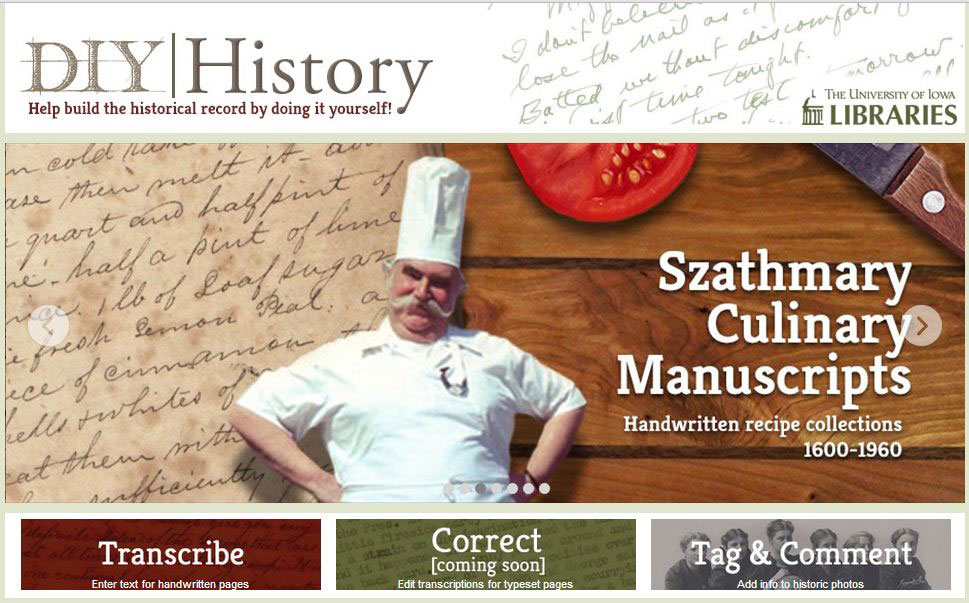 Calves head hash, dandelion wine, election cake, and West Indies-dressed turtle are just a few of the recipes from the University of Iowa Libraries’ new Szathmary Culinary Manuscripts and Cookbooks digital collection: http://digital.lib.uiowa.edu/cookbooks. Containing thousands of pages and spanning the 1600s through the 1960s, the handwritten cookbooks document culinary history in America and Europe, and how tastes have changed over the years. The do-it-yourself spirit of the housewives, cooks, winemakers, and Girl Scouts who wrote out and compiled the recipes makes the Szathmary collection an appropriate choice to help launch DIY History – http://diyhistory.lib.uiowa.edu – the Libraries’ new initiative that lets users contribute to the historical record by transcribing and tagging primary source documents online.

DIY History is an expansion of the Libraries’ earlier experiment with crowdsourcing, or outsourcing large tasks to the public via the Web: the Civil War Diaries and Letters Transcription Project. Operating for just over a year, the site was a resounding success, with thousands of volunteers all over the world transcribing more than 16,000 handwritten pages. With the original Civil War materials nearly completed, the Libraries created a new crowdsourcing site with additional handwritten content needing transcription: cookbooks, correspondence and diaries belonging to legendary Iowa football star Nile Kinnick, a 40 year-run of diaries from the Iowa Women’s Archives, and newly acquired Civil War documents from donors drawn by the crowdsourcing initiative. DIY History also features tagging and commenting functionality through Flickr for thousands of historic photographs and yearbook pages. The goal of the site is both to enhance digitized artifacts with added text to make them easier to find and use, and to engage the public to interact with historic materials in new ways.

“We’re opening up these collections to anyone who is interested in them,” says Greg Prickman, Head of Special Collections. “We are asking people to take an active part in improving the usefulness of the material we offer, and to participate in the process of describing what we hold.”

The Szathmary digital collection is part of the Iowa Digital Library – http://digital.lib.uiowa.edu – which features more than a million digital objects created from the holdings of the UI Libraries and its campus partners; included are illuminated manuscripts, historical maps, fine art, political cartoons, scholarly works, audio and video recordings, and more. DIY History is the latest public engagement initiative from the UI Libraries, a staunch supporter of new forms of scholarly publishing, digital humanities, data curation, and open/linked data. 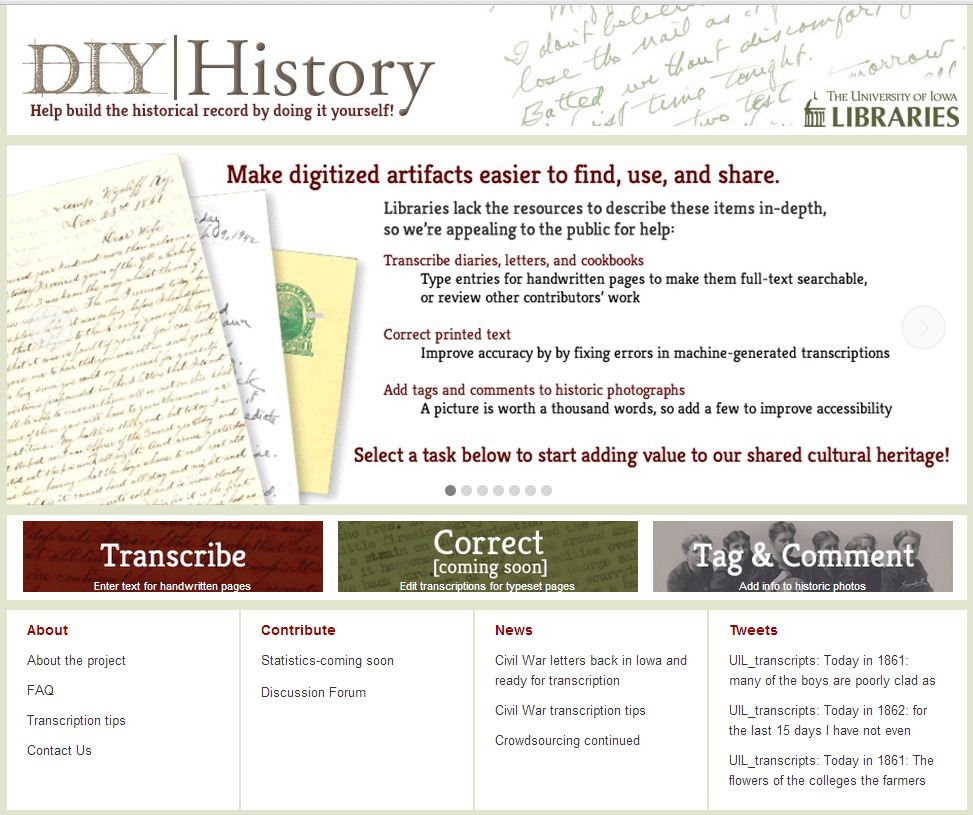 Shhh… we’re quietly rolling out a soft launch for DIY History, our expanded crowdsourcing site that’s replacing the Civil War Diaries & Letters Transcription Project. Please have a look around and try out the new functionality and content as we do some last-minute tweaking, then check back next week for what we hope will be a much louder official launch. 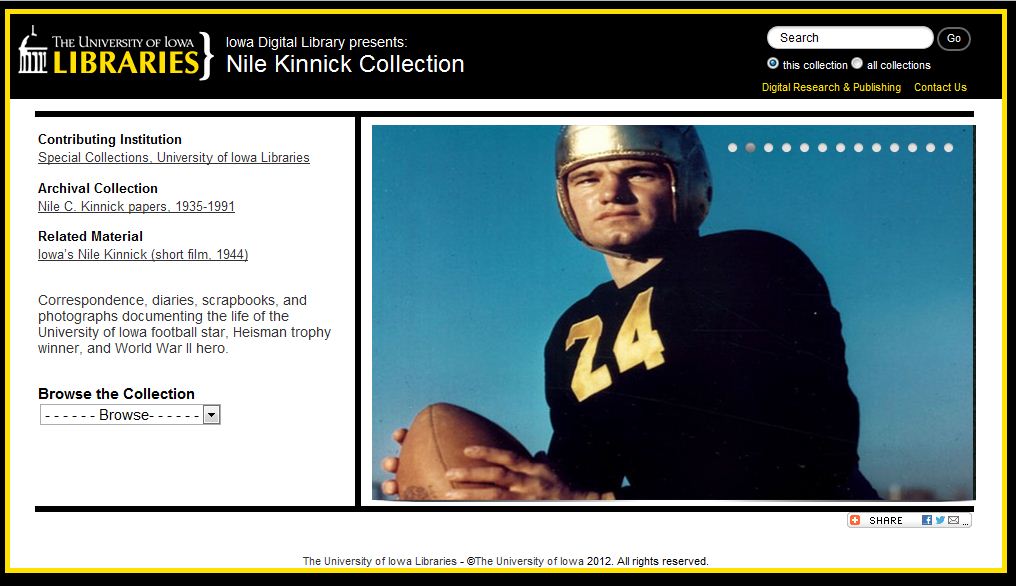 Each fall tens of thousands of people cheer their beloved Iowa Hawkeyes in the football stadium that bears the name of Iowa’s only Heisman trophy winner: Nile Kinnick Jr. Standing only 5’8” tall, Kinnick was a giant among men, a champion athlete and scholar who gave his life for his country serving in World War II.

A new digital collection from the University of Iowa Libraries bringing together letters, newspaper clippings, and photos of Nile Kinnick is now online: digital.lib.uiowa.edu/kinnick. These materials tell the story of one of the UI’s greatest football legends.

Included in the collection is the text of Kinnick’s Heisman trophy acceptance speech. Whitney Martin, a reporter covering the Heisman ceremony for the Associated Press, described the scene as “several hundred men and women rose and cheered and whistled…You realized the ovation wasn’t alone for Nile Kinnick, the outstanding college football player of the year. It was also for Nile Kinnick, typifying everything admirable in American youth.”

The Nile Kinnick Collection is the latest addition to the Iowa Digital Library, which features more than half a million digital objects created from the holdings of the UI Libraries and its campus partners. Included are illuminated manuscripts, historical maps, fine art, political cartoons, scholarly works, audio and video recordings, and more.

Recent temperatures in the 100s here in Iowa have us cowering in our climate-controlled offices, but a browse through past heat waves documented in the Iowa Digital Library helps to put things in perspective. Worst of these was the summer of 1936, the hottest on record, marking the end of the Dust Bowl years. A July 16th Daily Iowan story  put heat-related fatalities in those pre-air-conditioning days at 3,500; according to government figures, the death toll rose to 5,000 by the end of the summer.

Despite the heat, some Iowa Citians still found the strength to indulge their intellectual curiosity, as shown in this D.I. investigation of whether it really is hot enough to fry an egg on the sidewalk. (Answer: Not really.)

University of Iowa alumna Mildred Wirt Benson — journalist, pilot, amateur archaeologist, ghost writer, and the original author of the Nancy Drew mystery series — was born on this day in 1905. To mark the anniversary, we’re featuring a gallery of her book covers, from the iconic to the unintentionally terrifying, on our Iowa Digital Library Pinterest account. View even more digitized artifacts at the Mildred Wirt Benson Digital Collection.

This week on Twitter, we’ve been featuring 4th of July-related excerpts from the Civil War Diaries and Letters digital collection, as transcribed by our crowdsourcing volunteers. Unfortunately for the soldiers, the holiday typically held business as usual — the fatigue, discomfort, and anxiety of life on the battlefield — mixed in with the occasional historic event.

In contrast are letters from home, detailing 4th of July picnics, concerts, and various other “selebrations.” A favorite, written to Tillie Wise Clark from her niece Bell, is excerpted at length below. While sparing a few lines for her brother Lycurgus, a captain in the 101st Colored Infantry Regiment, Bell shows a preoccupation with parties, dresses, and beaus that’s worthy of Scarlett O’Hara herself.

…Aunt Bell and Jessie went to Winona, [for] a festival of some kind there in the afternoon. I could not go, as I was so fortunate as to get my face poisoned Wednesday, consequently it is about as big as two faces ought to be, with the exception of the eyes, which are uncommonly small. Aunt Bell wants me to get my Photo now, but I do not think twould be pretty so I will not follow her advice…

Curgus is coming home in July, and perhaps when he goes back will come by Winona. Seems to me I’ll be kinder glad to see him, wish mother and all the rest of the folks would come with him. I rather think from the way he writes, he has a notion of joining the regulars. I don’t want him to, dear knows, but of course he will do as he likes.

By the way I have been to Deer Park. Went Wednesday last in a buggy or carriage with nineteen others. Had ever so much fun, Colvins, all but Herve McCartys, Wilsons, Grays, and some others, made quite a respectable load. “Nely” Colvin and I were on the seat with the driver, Frank McCarty. Aunt Bell did not go. Consequently there were but about three I was acquainted with, didnt have any introductions either, but I don’t care. Enjoyed myself the best kind. The folks from about Uncle Abner have not gone yet, I may get to go again, possibly.

I had almost forgotten to tell you I have such a very pretty new dress, not quite made yet. I just know I will get a beau the fourth of July, as I’m most determined to wear it. Am going to get a hat this week also if I can find any thing in Winona or Lostant pretty enough for me to wear, know I’ll look awful handsome if my face should happen not to get well. Guess I will get a letter from somebody this week, wouldn’t you like to see it. I’m getting anxious myself. The cherries are turning red, will have pies of them this week, Grandmother says, the strawberries are all gone, were not very many in the first place…

Much love to all the folks, and please look over all errors.

This and other images of 4th festivities, now featured on the Iowa Digital Library Pinterest site:

Celebrate the solstice with this selection of summery items from the University of Iowa Museum of Art Digital Collection: 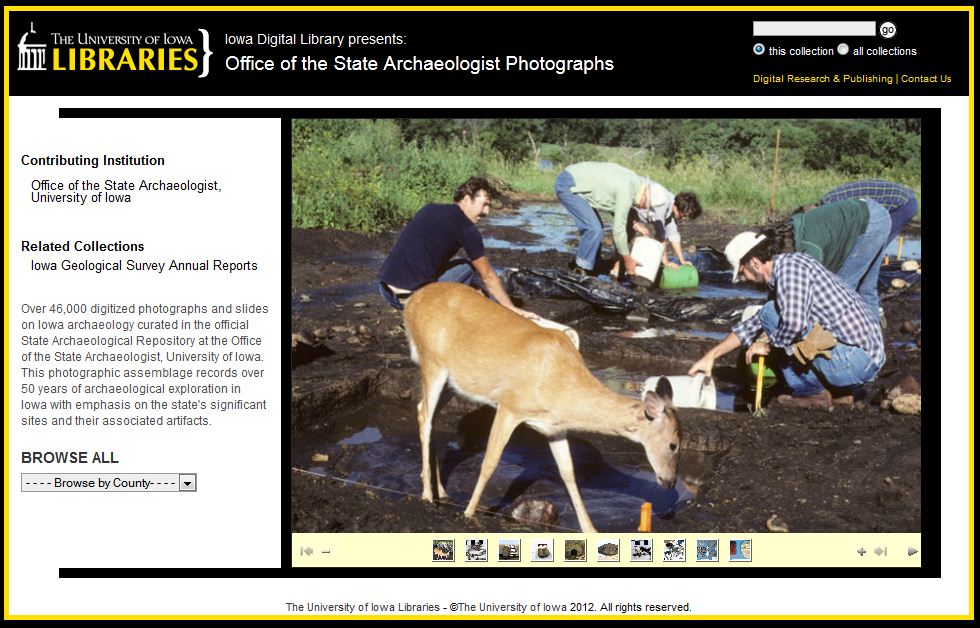 The University of Iowa Libraries is pleased to announce the release of the Office of the State Archaeologist Photographs Digital Collection: digital.lib.uiowa.edu/osa. This unique digital collection currently includes over 23,000 original photographs and slides from the State Archeological Repository curated by the Office of the State Archaeologist (OSA), the University of Iowa. Digitization is ongoing and will grow the online collection to over 46,000 digital images by the project’s end. These photographs  provide critical visual field information on archaeological investigation at 2,023 archaeological sites recorded in the official Iowa Site File. The digitization of this collection will support and enhance the wide range of research and teaching activities offered by OSA staff and will expand access to these valuable historic resources for all Iowa citizens.

Ranging from 1952 to 2007, the photographs document the history of the last half century of archaeological research in Iowa and serve as a record of many of the cultural artifacts associated with many historically significant sites. Fort Atkinson (Winneshiek County), a historic military outpost in the Neutral Ground occupied between 1840 and 1849, Blood Run (Lyon County), the site of one of the largest Oneota villages in Iowa, and Cherokee Sewer (Cherokee County) the site that yielded Iowa’s oldest musical instrument are a few of the historic sites represented in the digital collection.

Digitization of this collection was made possible by a grant from the Historical Resource Development Program (HDRP) of the State Historical Society of Iowa.

The collection is the latest edition in the Iowa Digital Library, which features more than a half million digital objects created from the holdings of the University of Iowa Libraries and its partners. Included are illuminated manuscripts, historical maps, fine art, political cartoons, scholarly works, and more. Digital collections are coordinated by Digital Research & Publishing.