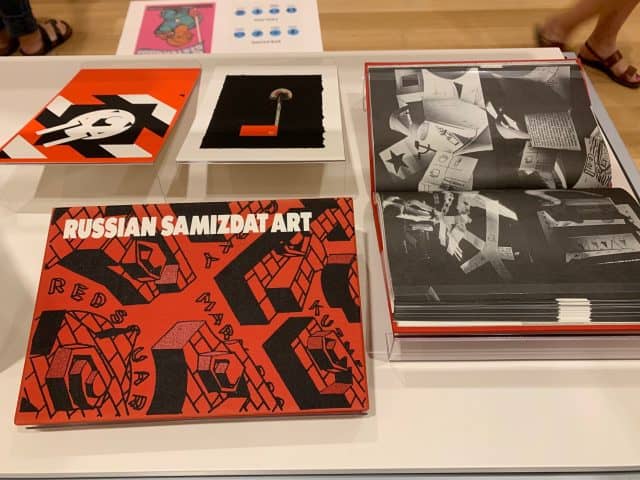 When Julia Leonard was approached by the College Book Arts Association (CBAA) about hosting their traveling exhibition, Rising Together: An Exhibition of Artists’ Books, Prints and Zines with a Social Conscience, she knew it would be a great fit for the Main Library Gallery and a meaningful way to connect items from the University of Iowa Libraries Special Collections to contemporary works. She invited Kalmia Strong to co-curate the exhibition, and together they decided to pair select juried pieces from the CBAA exhibition with carefully chosen works from Special Collections. In addition to Special Collections items, they also chose to include zines from the Public Space One Zine Collection.

Underground and alternative publishing models have been critical to activists, dissidents, and artists for hundreds of years. One of these methods of publication, the zine, surfaced in the 1930s as way for fans of science fiction to trade ideas, fan fiction, art, and more. In the decades that followed, this type of underground self-publication began to gain a wider appeal.

But what is a zine, exactly? Zines in general are self-published, and typically cheaply-produced, publications which have a diverse history and reach. Their most distinguishing trait is that they are driven by the passions of the maker, whether those passions are political, related to fandom, or are responses to mainstream culture. Rising Together | Protest in Print displays a selection of zines drawn from the Public Space One Zine Collection, which features personal zines, and zines concerning anarchist and radical politics dating mostly from the 1990s and 2000s.

Sharing the case with these zines are a few examples of Cartonera publications and samizdat. Cooperative Cartonera publications were pioneered by the Eloísa Cartonera collective following Argentina’s 2001 economic crisis, and now are popular through Central and South America and Europe. Cartonera books are made using inexpensive printing methods and feature uniquely hand-painted cardboard covers sources from cartoneros, or cardboard collectors. They usually contain literary texts, some of which are politically oriented. Samizdat was a dissident underground publishing endeavor in the Soviet Union and Eastern Bloc countries following Joseph Stalin’s death. Works protesting the suppression of freedom of expression and other unsavory policies, or works containing material deemed “subversive,” were often produced by hand-copying or by using a typewriter and carbon paper. While most samizdat was written, underground music/audio and visual art were also part of this movement.