Since my last post, I settled upon collecting films with references to honeymoons and more broadly, to films that adhere to a romance narrative. Using IMDB’s keyword search, I researched films that contained words such as “newlyweds” and “honeymoon” in their plot description. I then ran a search for the films within UIowa’s media library and rented every DVD that was available. I entered these titles into a spreadsheet along with release date, genre, director and relevant themes. While I collected close to 50 titles, I managed to rent, download, transcode and sort through about 30 films. Creating a viable workflow for this task was a challenge. When I discussed my objectives with Matthew Butler, he suggested I use Trello to track my workflow. 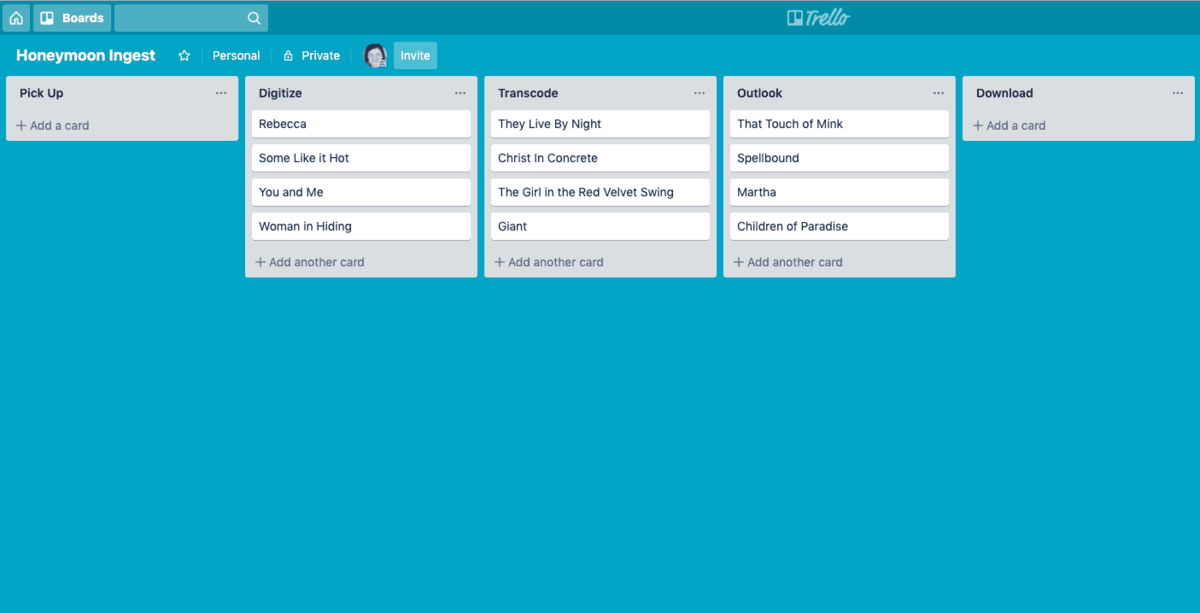 As I came to realize that I would not collect the number of films that I had hoped to collect, I decided to at least collect films from a range of decades, so I would have the opportunity to track the phasing in and out of certain narratives over time.

In Consuming the Romantic Utopia, Eva Illouz chronicles the interrelationship between love and capitalism over the course of the 20th century. She writes that though, “mass culture did not create the ideal of romance,” it did “transform the old romantic ideal into a ‘visual utopia’ that combined elements of the American dream (of affluence and self-reliance) with romantic fantasy” (31). Illouz argues that film promoted identification with romantic heroes by rendering fantasies in the sharp focus of cinematic realism. From Illouz’s writing I borrowed conceptions of love that have coexisted, waxing and waning in popularity over the past century. Influenced by religious ideals as well as market forces, many of the narrative frameworks she discusses contradict one another.

Love as a redemptive force

Love as a “utopia of transgression”

Love as a consumerist leisure practice

Love as a democratizing force or “love is blind”

While I haven’t gotten very far in the editing process, I have begun organizing sequences by shots, scenarios and themes that recur across the films. In the video below, I’ve edited together some of these recurring images, tropes and characters.