My name is Ramin Roshandel and I’m a 2nd-year PhD student in Music Composition. My summer project for the Studio comprised of two parts: first is the analytical part and the second is the compositional piece.

For the first stage of the first part, I’m analyzing the difference between microtonal Iranian intervals and western classical ones in terms of frequency. Except for the major and minor second, there are two other types of seconds in Iranian music which are different compared to western classical music; We will name them J and H. At this point, we have isolated 2-3 short recorded examples of these intervals from pre-recorded sound files so that we can find out what the exact frequency of those pitches is. These recordings will either be chosen from the well-known Iranian music maestros’ recordings or by playing them by myself on the setar (one of the Iranian classical instruments). In this research, analyzing the frequencies has been done by using two software: Audacity and Max/MSP. Also, for analyzing our sound files, I have used another software called Sonic Visualizer.

For instance, except for two types of intervals which are in common with western music (whole-step or whole-tone, and half-step or semi-tone), there are two other types of the interval “second” in Iranian classical music.
One is called “Mojannab” and it is almost ¾ of a step and the other is called “Taninee” which is 1¼ of a step.

Next, we played each of the tetrachords on the setar and recorded them. This way, we are able to get the plot spectrum for each frequency. 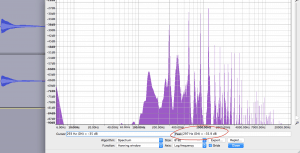 For example, after importing the recorded sound file into Audacity and getting the plot spectrum of it, we found out that the first strong peak is 297 Hz (shown above in the picture).

In the next level, we used another tool which is essentially a Max patch that converts the frequency to pitch for us. In other words, if we give the frequency as the input, this Max patch will give us the closest pitch (on the piano as a MIDI note) plus the number of cents it is far from the mentioned pitch. In this case, 297 Hz is a D4 which is 20 cents higher than D4 on the piano. As another example, if we take 321 Hz now, the result will be a sharpened D#4 (+54 cents). 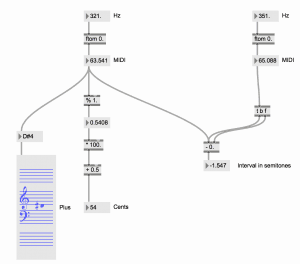 Also, this patch has another ability that it can get two frequencies and calculate the interval between those two frequencies in semitones. As in this example, the interval between the first (321 Hz) and the second (351 Hz) pitches is about 1.54 meaning that it is 0.54 bigger than a semitone and it is interesting that this the exact amount of cents that we got in the previous paragraph.

These are the processes I have been going through in order to get the technical information for writing these intervals for the western classical instruments in the second part of the project.