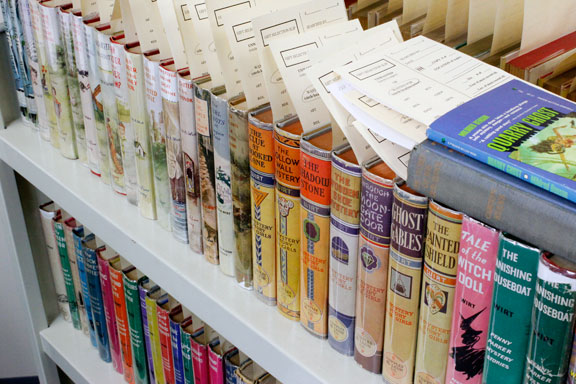 There were no missing documents, phony relatives, or suspicious fires — just a straightforward bequest from Peggy Wirt, whose mother, the late Mildred Wirt Benson, was the original ghostwriter of the Nancy Drew series. But the collection that was recently left to the Iowa Women’s Archives calls to mind another mystery trope – the hidden treasure: the gift of 150 books, written and signed by Benson, was appraised at $115,000. According to IWA Curator Kären Mason, however, the true value of the donation lies in further documenting an important figure in American popular culture.

The first student to earn a master’s degree in journalism from the University of Iowa, Mildred Wirt Benson wrote the original Nancy Drew novel, The Secret of the Old Clock, in 1930 under the pseudonym Carolyn Keene. She completed nearly two dozen more titles in what has become one of the most successful children’s book series ever. Benson published numerous other children’s novels, both as a ghostwriter and under her own name, before turning to a career in journalism. The Peggy Wirt bequest will be added to the IWA’s Mildred Wirt Benson collection, used frequently by scholars and fans alike, that was donated by the author in 1992 and subsequent years until her death in 2002.

Two additional sets of new acquisitions complement the book donation. Purchased at auction from the estate of Peggy Wirt are a vintage typewriter of Benson’s, along with several photo albums. The latter include the original snapshot of an image that has become iconic to fans of the author: a college-age Benson, circa 1925, making a daring swan dive into the Iowa River near the current site of the UI’s student union.

The other recent donation comes from UI Journalism Professor Emerita Carolyn Stewart Dyer, who gave the IWA her collection of foreign-language Nancy Drew novels. The covers of these French, Japanese, and Swedish translations depict a Nancy both familiar and strange – renamed Kitty or Alice, holding a gun, her trademark titian hair changed to brown or blonde.

In any language, the character continues to serve as a feminist icon who inspires women “to persevere, to achieve, to ask questions and find answers,” according to Dyer. While coordinating the UI’s 1993 symposium on Nancy Drew, she heard from many women who grew up on the series:

Most compelling of the many elements of the stories women told us about reading Nancy Drew were the accounts of how, as girls, they saw in Nancy an alternative to conventional notions of what a woman could be. Women in many occupations told of learning from Nancy to see adventure in solving problems and the joy of self-reliance. These qualities, they said, led them to the futures they chose as lawyers, researchers, librarians, and detectives, among other roles. (1)

The Mildred Wirt Benson materials may be viewed at the Iowa Women’s Archives. Selections from the collection have been digitized and made available at the Iowa Digital Library: digital.lib.uiowa.edu/mwb 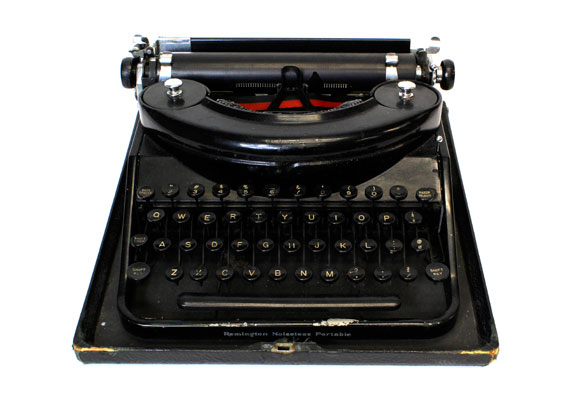 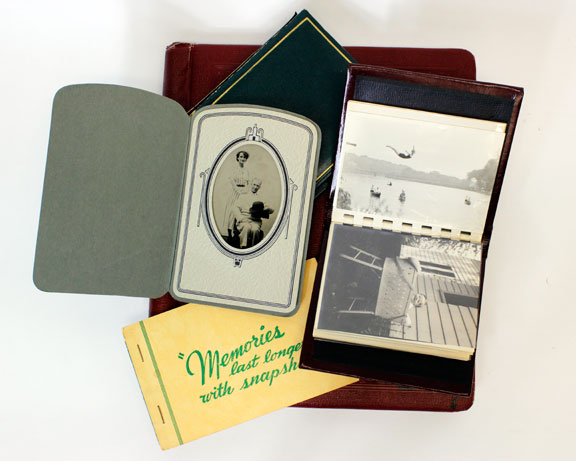 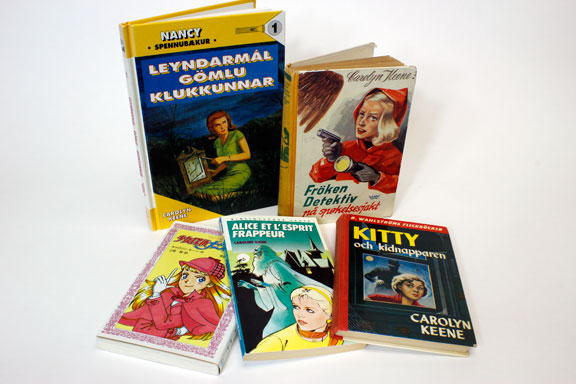 5 thoughts on “The Treasure in the Old Will: Iowa Women’s Archives Inherits Valuable Nancy Drew Collection”