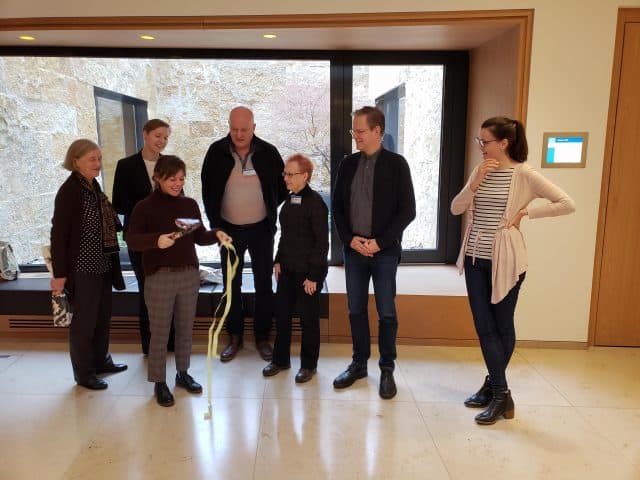 Nancy Kraft, Head of Preservation & Conservation, recently traveled to Berlin for an International Organization for Standardization (ISO) meeting. The meeting was one of many work sessions to draft and publish a new international standard for emergency preparedness and response plans. The standard addresses what libraries, archives, and museums should include in their disaster response plans and is adaptable for any disaster and any size organization. Since the standard is international, the draft accounts for all kinds of disasters in different geographical locations. For example, in Iowa we must deal with floods and tornadoes, whereas California needs to think about earthquakes and forest fires.

Kraft had been corresponding with other members of the ISO Working Group via the internet since she became a member in the fall of 2015, but as the draft progressed and became more intricate she needed to start attending meetings in person. One meeting was held in Berlin from January 30th through February 1st and consisted of delegates from Sweden, France, Germany, and the U.S. “As the only native English speaker in the group, I did my best to explain nuances and best choice of words,” said Kraft. She was able to draw on her own experiences with disaster response to help inform the draft. Although the lead writer’s first language is French, she drafted the standard in English and was quite thorough in her approach.

When the disaster response standard is published, it will be available in both French and English. The ISO website says that drafting a standard normally takes around three years, and this one is no exception. It has undergone many rounds of drafts with comments from the working group and the international standards community. During the last round of comments there were over 300 editorial suggestions, so although the draft was approved for publication, it will need to be sent out for one final round of comments. Kraft hopes the standard will be published within the year.

Once the document is published, it will be reviewed every five years to keep it up to date. UI Libraries will use the standard to create a new disaster response plan.