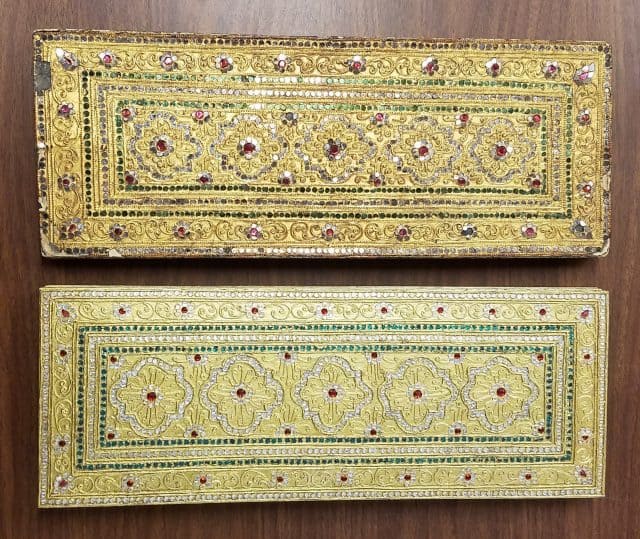 Christine Manwiller, former UI Center for the Book (UICB) student, created a facsimile of a Burmese binding for a historical binding class she took as part of her MFA degree. The original Burmese book was from Fritz James, the retired CEO of Library Binding Service, Inc. He acquired the manuscript during his travels and gifted it to the University of Iowa Libraries shortly before Manwiller was inspired to make the model. The original book is an accordion foldout. Its palm leaf style was typical of Burmese books from the late 19th century. Its ornate binding is covered in imitation precious stones, and this elaborate design was likely chosen to highlight the manuscript’s religious significance. Manwiller recreated the text block, emulating the white Pali script written on black paper. She constructed the outside boards, finding materials that would closely match those used for the original book. Conservator Giselle Simón said that this project was an “attractive prospect” for Manwiller, who finds joy in detailed work. Manwiller is now at Buffalo State University in their advanced conservation program.

The facsimile of the Burmese binding is part of the Book Model Collection (BMC), which is housed in the UI Libraries’ Conservation Lab. The BMC was able to acquire the model thanks to the William Anthony Conservation Fund. In 1984, Anthony founded the Conservation Lab and was its first conservator. The fund is meant to honor his achievements and support ongoing and special conservation projects. To view the facsimile in the BMC contact Simón at giselle-simon@uiowa.edu. More information about the original Burmese book can be found in the Iowa Digital Library and the object can be viewed in Special Collections.