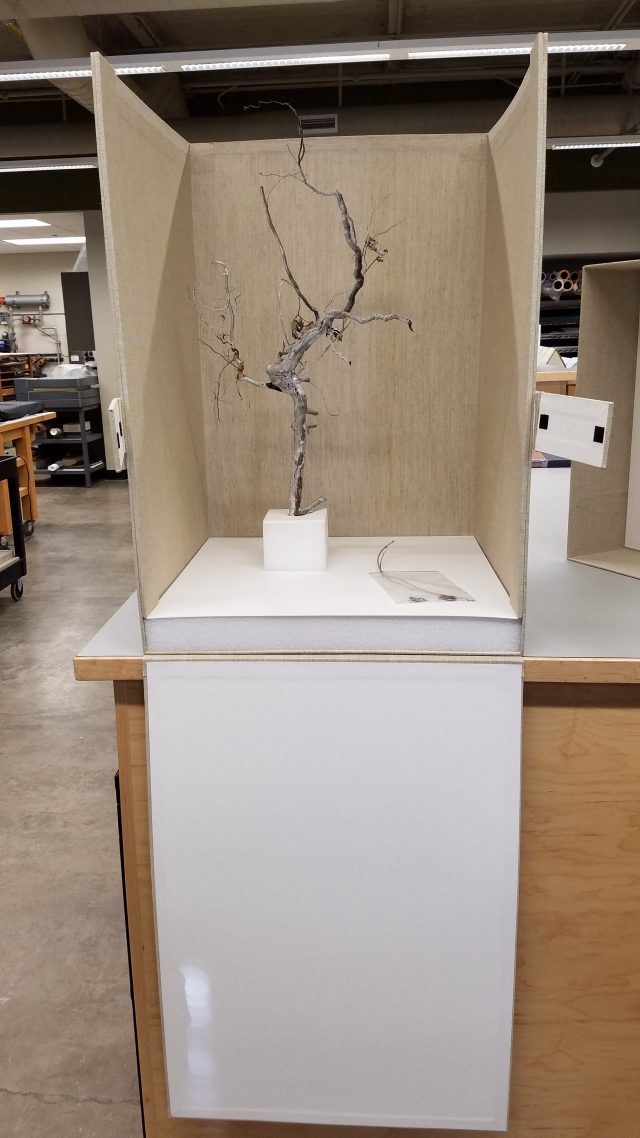 As part of his work in the conservation lab, Bill Voss constructs enclosures to house delicate artifacts. He recently completed a large custom enclosure for one item from Andrei Codrescu’s Art Installation Piece. Codrescu is a Romanian-American writer and artist. His artwork and poetry was acquired for the UI Libraries’ International Dada Archive in Special Collections. A spray-painted tree, wooden staff, puppets, and a pack of Russian cigarettes are just some of the artifacts in the collection.

The spray-painted tree is especially fragile and requires a container that will protect it and help maintain its artistic integrity. Voss created the design for the custom enclosure which he calls a “drawbridge box.” He built the tree’s box over the course of a couple weeks, letting the boards dry in between steps of construction. Foam was used to hold the object in place inside its container and add an extra layer of protection. One wall of the drawbridge box opens down so that the tree can be easily accessed while avoiding damage to the artwork.

Voss has made similar structures in the past to protect items like a globe, a doll, and an Emmy, but the tree’s enclosure came with its particular challenges. To accommodate all of the delicate branches, the box needed to be large. The big boards used to create the walls had a tendency to warp, and keeping them straight was an obstacle. Previous drawbridge boxes that Voss constructed were smaller and needed only a lid to keep them securely closed. The tree’s box needed reinforcement around the middle to support the large boards. This reinforcement also acted as a second closure. Codrescu’s artwork will eventually be kept in off-site storage.

Check out the Andrei Codrescu Papers finding aid to learn more about the collection. 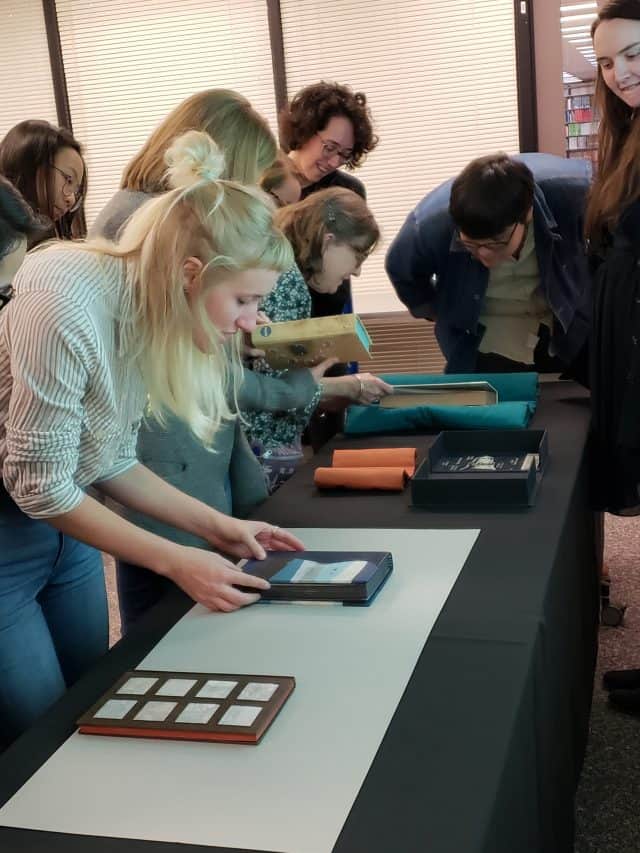 In addition to Thursday’s lecture Deborah held an informal workshop in the Conservation Lab with students to demonstrate the French-style endband. It’s always great to see other techniques and methods for sewing endbands and this is one of Deborah’s specialties.

For more information on Deborah from Dartmouth College. 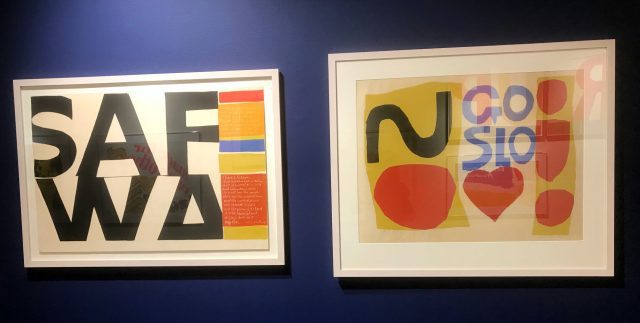 Recently a group of staff from the University of Iowa Library’s Conservation Lab journeyed up to Dubuque to install some pieces lent from the Iowa Women’s Archive (IWA) to the Dubuque Museum of Art. The materials and artwork are from the Josephine Pletscher Papers collection, donated to IWA by Kimberly Kirkpatrick Sparling and Ann Saylor in loving honor of Pletscher who was an artist, Iowan, and student of Corita Kent. The exhibit that the pieces will be a part of is called Just to Live is Holy which “features more than a dozen artists affiliated with a religious order, each of whom has made a unique contribution to our understanding of the relationship between art and faith and the importance of social justice.” Some of the most notable works on display were made by Corita Kent and these include the ones installed by Conservation staff generously loaned by the Iowa Women’s Archive.

In the words of Conservator Giselle Simon,  “Staff couriered all the items and installed the work with assistance from the exhibit team at DUMA, who were excellent. We basically review the condition of each item before it leaves the UI, upon arrival at the location and then again when we de-install the work to assure both the borrower and lender that the materials are safely handled and secured. The 2nd photo is of us shows us checking the condition of items as we unpack them with the curator and exhibit staff as well as a team of preparators (including Bill) hanging the framed work. We have 4 framed wall pieces and 18 flat broadsides, cards and other printed materials in cases in the exhibit.”

The exhibit Just to Live is Holy will be on display through January 9, 2019 at the Dubuque Museum of Art. Check out the press release here.

Last month, Assistant Conservator Brenna Campbell traveled to the Art Conservation Department at SUNY Buffalo State to take a workshop on using UV photography to learn more about cultural heritage objects. This qualitative technique is valuable both for identifying areas of change within an object — either from damage or treatment — as well as for tracking changes over time.

Instructors Jiuan Jiuan Chen and Dan Kushel expertly led participants through a variety of lectures and hands-on exercises. The group experimented with photographing a variety of objects, including paintings, prints, glass, baskets, and textiles. A few examples are below.

This neo-Sumerian clay tablet, recording the sacrifice of a kid goat dates to ca. 2050 B.C. and is frequently shown to students as an early example of writing in cuneiform accompanied by the impression of a cylinder seal. Due to its frequent use it was decided to create a custom box which would keep the object secure and viewable behind a small window, but which also has the option of being further opened to allow the object to be removed from the enclosure. The tablet rests in a fitted recess in a block of ethafoam covered with cotton and hollytex (spun polyester) and can be seen through a window of polyester sheeting. To remove the object a flap secured by embedded magnets is lifted revealing the tablet as well as a second recess containing a pair of cotton gloves for safe handling.

We had a very busy day at the Cultural Recovery Center in Brooklyn. The volunteer paintings conservator examined a couple of paintings that an artist brought in during the morning, just before noon she removed an artwork from a frame and examined the piece for mold and damage, in the afternoon she examined art on canvas and tested for mold. The volunteer object conservator spent most of the day cleaning a wooden object with a vacuum cleaner, brush and soot sponge. An artist’s daughter-in-law spent several hours vacuuming his artwork on canvas.

I spent the day assisting the paintings conservator photodocumenting each piece that she examined and spent a couple hours inspecting art on paper for mold.

Today I worked with a paintings conservator and an artist to review his paintings that had been stablized and lightly cleaned in the CRC studio by volunteer conservators during the past few days. I photo documented each painting, taking a picture of the assigned number to the painting, a front image, and any problem areas. The conservator discussed the damage and possible solutions for each painting with the artist. She will add her observations and recommendations to a treatment sheet that is kept for each painting.

We then set each painting into a wooden rack that a volunteer had constructed for safe keeping until the artist can pick up the paintings.

We have been working on many projects for various museums that got hit by the flood of 2008. Remember the entry way back on December 18 of 2009? We may have sounded elated about our accomplishments then, but now we are for sure! We have finally finished the rest of the flood-damaged phonograph records.

All 1580 10-inch LPs and 78 rpms were thoroughly cleaned, sleeved and boxed. We are estimating that this process took at least 400 hours. These records were returned to The National Czech& Slovak Museum within 30 boxes.

One project that Kallie is working on is cleaning a collection of busts. After Caitlin tested a couple different treatment methods she settled on using a mixture of water and photo flo roughly a 4:1 ratio. Kallie has been using swabs and cotton pads to remove the mud covering the busts. This process is particularly time consuming due to all the small crevices in the sculptures. There are 7 busts and Kallie has completed one and is halfway finished with a second.

The busts were a part of The Old Taylor Distillery

Company bourbon whisky promotion. For $5 you could buy a sculptured bust of an ingenious American. They belonged to Mrs. Gerolyn Banks, a teacher who used them as instructional tools in her classroom (incidentally, she didn’t drink alcohol). Kallie is working on Lewis Latimer who worked with Thomas Edison and developed an improved method for the production of carbon filaments in Edison’s light bulb. The ad for this particular bust can be found in Ebony, July 1967.

Other busts in the series include: Granville T. Woods who improved telegraph system for railroads; Garrett Morgan who invented the electric traffic signal; Benjamin Banneker was an astronomer, clockmaker, and surveyor who predicted eclipses; Norbert Rillieux improved sugar refining process; and Matthew Alexander Henson reached the North Pole with Admiral Peary in 1909. He was actually the first member of the team to set foot on the spot.

One of our quandaries was how to clean Vernon Smith’s typewriter, an important artifact from the African American Museum. We found our answer when we contacted Vernon Steve at Steve’s Business Machines (formerly Steve’s Typewriter) in Iowa City. Vern cleaned and repaired the typewriter but did not repaint it. The typewriter shows the wear and tear of the flood but is clean and fully functional.

Vern inherited the business from his father. He not only repairs typewriters but also repairs cash registers, old calculating machines, time-clocks, etc. In fact, after seeing the results of the typewriter cleaning, we left a flood-damaged sweeper for repair.

The typewriter was a college graduation gift from Elmer Sr and Vesta Smith to their son, Vernon. He graduated from Coe College circa 1950. He used this typewriter to type up his master’s thesis at the University of Iowa. He received a master’s in Chemistry from the U of I in 1952. Before receiving his master’s he had accepted a position as a chemistry instructor at an African American college in Virginia. 10 days after receiving his master’s while he was packing to move to Virginia, he contracted polio and lost the use of both of his legs and one of his arms.

He spent 4 years recovering from polio and then found a job in the special laboratory at St. Luke’s Hospital in Cedar Rapids. He worked there for 35 years retiring as head of the lab. He was very active in community affairs in Cedar Rapids, particularly in Civil Rights issues. He co-founded the Cedar Rapids Negro Civic Organization in 1961 and served on its scholarship committee throughout the 1960s. In addition, he served as a member of the Cedar Rapids N.A.A.C.P. and the Cedar Rapids Council on Human Relations. In 1971, he was named “Handicapped Iowan of the Year”. He married Phoebe Downs and raised five children: Ruby, Vernon, Deborah, Phoebe, and Katharine. He passed away in 2000. More at: http://www.blackiowa.org/exhibits/finding_guides/SmithVernonPhoebe.doc