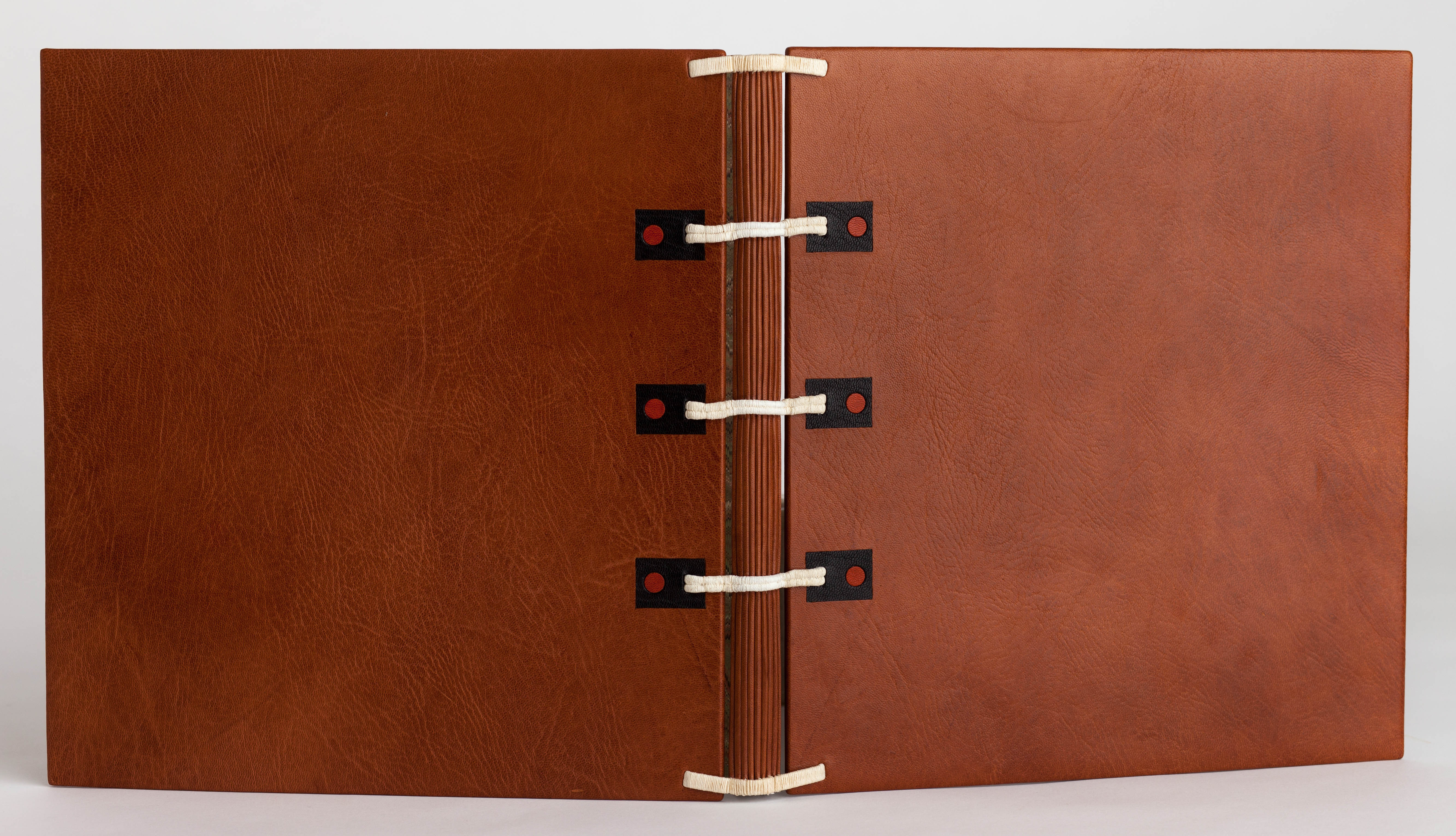 I approached the binding of this catalog of William Anthony’s work with great respect and admiration for William Anthony. It was an honor to study with Bill, not only because he was an excellent bookbinder and craftsman. He was generous and kind, warm and funny, a gentleman of the old school. I wanted to create a binding that reflected something of Bill’s character and Bill’s interests. I felt the binding should be understated and thoughtful, and it should have a masculine quality. For me, a visible sewing can be beautiful as well as suggesting strength. I chose muted tones of browns, greens, and rusts. I added some small in-laid squares and “dots” of leather for contrast and visual interest. The in-lays are just a small gesture, one that I hope Bill would have enjoyed, since he taught me how to do it.

This binding is an exposed spine binding. It employs a packed sewing over double raised flax cords, with the endbands sewn along with the sections. The text was sewn through a leather-lined concertina and then rounded and backed. Endbands and sewing cords lace through the boards and remain visible on the spine. The boards are covered with a medium brown vegetable-dyed goatskin. Contrasting the brown leather on the boards, black leather inlays with rust-colored “dots,” or circles, punctuate the entry of the sewing cords into the boards.

Penny McKean has an MA in Design and an MFA in Design from the University of Iowa. She began binding books in 1985 at the Mills College Book Arts Program and was a student of William Anthony’s at the University of Iowa Conservation Lab from 1986 until his death in 1989. She has studied with David Brock, Louise Geneste, Don Glaister, Monique Lallier, Tini Muira and Pamela Spitzmueller. In 1992, Penny began working as an independent binder at her studio in Iowa City, Blackbird Bindery. From 2005 to 2012 she taught bookbinding classes at the UI Center for the Book. Her bookbinding interests include book conservation, fine binding, and fine editions. She continues to live and work in Iowa City.

To bid on any of the bindings, please email us at lib-prescons@uiowa.edu. Bids will be accepted until the end of the silent auction, 7 pm CST on Thursday November 13th.