When Peabody Coal “hauled” the small town of Paradise, Kentucky away, I hadn’t been born yet.

But my life and the lives of all Kentuckians are often landmarked by loss–in many cases, before we’re born. The folks that come into being in coal country come into this world with a very specific deficit, are unwitting inheritors of a homeland that has been hollowed out by the very industry that has sustained our livelihoods for as long as our grandparents can remember.

It’s a paradox, and an old one. At the start of this project, I was trying to answer for myself—what makes this story urgent? Why tell the story of Paradise, a town now decades lost to history? Why now?

Earlier this month, I drove a colleague from his one bedroom apartment in Iowa City to his Grandma’s house in Huntington, West Virginia. Huntington’s a coal town that sits on the banks of the Ohio river, bordered by Ohio to the west, and Kentucky to the south. We passed the plant, mountain after man made mountain of black rock, and my colleague whistled and said, “Goddamn, you’d think they’d run out of the stuff.”  I laughed, “Well, yeah, I think you just summed up nonrenewable resources in a nutshell. They are. They did.”

It’s funny, but I’ve rarely seen “the stuff” first hand. My mom tells a story of growing up against the train tracks in western Kentucky, picking up hunks of coal in her backyard as a girl, stray rocks that had bounced from train cars, and believing this was how it must be made—that coal literally fell from the sky.

Once me and my colleague parted, I made my crooked, diagonal way back to western Kentucky, and to home. My route took me through the Appalachians. It had rained heavily in Huntington the day before I left—a flash flood—and the sky hung low with the aftermath of storm, fog rising from the far-off peaks like smoke.

Ashland Kentucky sits two miles south of the border. It’s the first town you hit when you cross the state line. If you’re coming, as I was, from I 64-W, you’d know it because just before you pass the Ashland exit on the right, you pass Hell on the left.

The Catlettsburg Oil Refinery occupies seven hundred acres of hill and valley, strategically positioned at the banks of the Ohio and Big Sandy River in order to access the Huntington Tri-State Port, which, as the primary means of export for the twin fossil fuel industries, Coal and Oil, makes it the largest inland port in the United States.

I’ve honestly thought of the refinery as the devil’s city since my mom gave it that name when I was a little girl. Looking out over those alien, glittering, smoke-stack flames from the backseat, I asked her—shocked—where we could possibly have ended up. Most of the objects that magnify or multiply in the viewpoint of childhood shrink as you age—but not this place. If anything, it was bigger than I remembered.

To be from Kentucky is to make your peace with paradox. Interviewing old timers about this landscape we share, the only home they’ve ever known, I often think about that Mark Twain quote—“I want to be in Kentucky when the end of the world comes, because it’s always 20 years behind.” From the vantage of the nation, this is a backwards place—stuck outside of time.

A retired coal miner I spoke to, who worked on the strip mine that took Paradise’s place, told me he had retired after thirty years of brutal labor (the effects of which he continues to suffer), but that if you accounted for, as he did, the weekends, overtime, the break-neck pace he and his team set in order to attempt to keep up with the insatiable demand, the ever-rising quotas enforced by his supervisor, by Peabody, and by the nation, he probably worked something much more like forty years. Rural and poor, the fruits of an industrializing culture rarely trickled down to these parts. But for America’s metropolises, gleaming along the East and West coasts, the urban centers ushering in the Dawn of a New Age, ushering in the future, were able to do so because in Kentucky we were stripping our past for the fuel and the heat, for the means to keep the lights burning in places we would never see.

I know a poet from Ashland—or used to—a boy I met when I was nineteen at a writer’s retreat in Hindman, Kentucky. After three intensive weeks workshopping each other’s heartbreaks and traumas, swapping dishwashing shifts and pulls of bourbon on the front porch of a sleeping cabin, we said our goodbyes. I hadn’t seen him since. Last thing I knew he was living in Lexington, a city I had to drive through to get home. At the exit for Ashland, I got, as my Papaw would say, a wild hair, and I reached out. 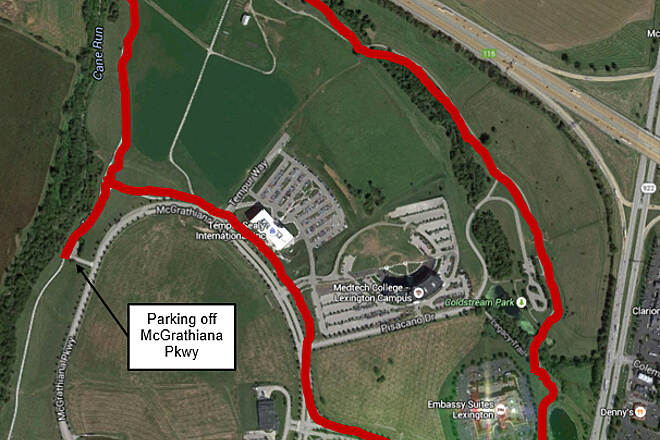 We walked along a small portion of the city’s newest green initiative, a 12-mile bike path called the Legacy Trail—parts of which are scenic (groves of yellow wildflowers and muddy streams preserved by the University of Kentucky’s agricultural department), but much of which is industrial (grey and beige concrete, vacant slabs, buildings advertising office space). To account for the disparity, the poet pointed out small anachronisms, a drag of sidewalk that ended, abruptly at the base of a dogwood tree, a gaggle of geese that backed up traffic at a nearby intersection. We talked and we walked and we asked and tried to answer,

In the seven years since I’d seen the poet, I’d graduated college, he’d finished his Master’s, we’d found and lost jobs, found and lost love, but from these separate spheres, at times thousands of miles apart, we’d both witnessed what felt like a steep and steady decline in hope. We no longer shared only the markings of the same home. We had become marked as a generation, as a nation, by the authoritarian, xenophobic, racist, climate-change-denying administration that had risen to power in the years since we last laid eyes on one another, last wrote poems in the woods. And we found ourselves, again, swapping stories of trauma. Some intimate, the deteriorating health of our family members paired with the exorbitant cost of their treatment. Some distant, asylum seekers imprisoned in internment camps at the country’s south-western border. And we talked, as I rarely do now, about Kentucky from the inside looking out.

Born and raised in Ashland, the poet had never not known the realities of the coal industry firsthand. He never experienced the distance most of us take for granted in our desperation to get food on the table and keep the lights on, the distance between what it takes, and literally what is taken, to keep the lights on.

Living in Iowa City, especially during an election year, I am often asked to speak for my state. Why do we, a place and a people ravaged by environmental devastation, by an opioid epidemic, by poverty and pre-existing conditions, vote against our own interests?

Undeniably, it’s a paradox. But it’s not without logic if you consider the most fundamental premise by which many Kentuckians live—you make a living by sacrificing your home. No distance between the devil’s city and Paradise.

If I am able to make an archive for a buried place, it’s possible that distance between the consumers and those consumed will become a little more visible for the rest of us too.