The Tale of Genji, written in approximately year 1000, during Japan’s Heian Period, was penned by  Murasaki Shikibu, a mid ranking noble court lady who served the Empress. 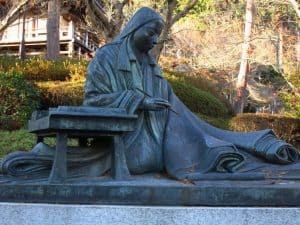 Widely considered to be the world’s first real novel, it combines fictional characters, relationships and plot line with the very real intricacies of every day life at the Imperial Court. It can very easily be used as an in depth guide to the aesthetics of the Heian Period, since it includes detailed descriptions of kimono colors and patterns, incense making practices, poetry and the societal expectations for both men and women.

It’s a complex and convoluted piece of literature to say the least, and there aren’t many in depth resources available to English language students of the text,  so Part 1 of my project is my ongoing work to create a Wikipedia-esque reference website. The website, entitled Genjipedia, includes relevant information about characters as well as details about things like plants and animals.

Part 2 of my project, and what I’m focusing on mostly this summer, is the digital map I am creating. Since the text is based in the real world, it stands to reason that there many places visited by characters and/or mentioned in the prose and poetry. However, much of the focus of research regarding “place” in the text is focused on Heian-kyo (the capital). Now, much of the novel does take place within the city but, as I’m discovering as I page through this text looking for place names, there are so many more locations that are mentioned or visited by characters that it seems remiss not to look at how travel and place outside the capital are being used and interacted with in the story.

Currently I am making lists of locations and whether they are mentioned in prose, mentioned in poetry, or visited by a character. I am creating Excel spreadsheets to organize my information and am including chapter title and number (there are 54 chapters in total!), location name in text, other/current names, the passage the location is mentioned in and, if applicable, which character(s) visited there. The next step will be figuring out which places existed then and still exist, which places existed then but don’t/are different now, and which places just never existed in the first place and were made up for poetic purposes.  Some places I know I won’t be able to pin point exact locations for, but I’m hoping with extensive research using other premodern texts and research by other premodern scholars, I’ll be able to at least figure out a general idea of where something existed.