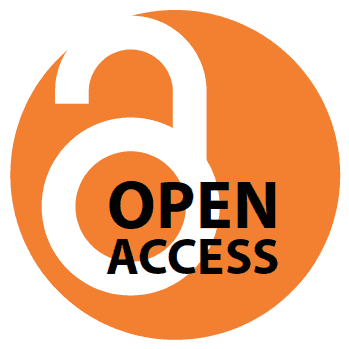 The University of Iowa Libraries celebrated Open Access Month in a variety of ways, including several guest blog posts from faculty on why they support open access. Of particularly note to us is that all the authors include Iowa Research Online as an important component of their open access. We are happy that our repository supports our faculty member’s publication and allows more people to benefit from their research.

Open Access is the way that new knowledge is made…easier by Rachel Marie-Crane Williams, 7 Oct. 2015

Expectations Exceeded – My Experience with the Open Access Fund by Matthew Uhlman, 23 Oct. 2015

To include your content in Iowa Research Online, you can either click the “Submit Research” link in the sidebar or contact your subject specialist. Anything that is appropriate for your CV may be included in IRO.

The publications in Iowa Research Online (IRO) are very widely used. From July 2014–June 2015, the items were downloaded more than 1.5 million times!

This map shows the downloads of content from IRO during the last fiscal year. Adjust the map in the window below to see more countries. Move your cursor over the map to see the counts from each country.  You can also see a large version of the map.

If you want to include your scholarship in IRO to increase its global reach, contact you subject specialist at the University Libraries.

We are very excited to have had 5 million downloads in Iowa Research Online! We had 4 million downloads in November, so this last million happened in only about 6 months. Some of this growth is attributable to the fantastic content added recently (such as the State Historical Society journal Annals of Iowa, back to 1863). 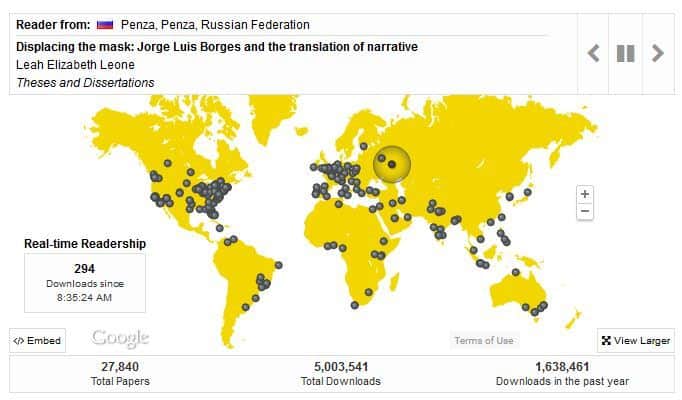 While we don’t know exactly what download made us cross the 5 million mark, these items all received higher use around the time we made it to 5 million.

Two years ago, the University Libraries and the Provost’s Office launched an Open Access Fund to pay the processing fees related to open access publishing.

The fund is meant to encourage the University community to publish their research in open access platforms. The open access publishing model allows free, immediate access to research and allows authors to retain intellectual property rights to their research. To recoup publishing costs, some open access journals charge article processing fees to make the work freely available online. More information about the fund can be found here.

The articles come from a wide variety of colleges, with majority of articles having authors in the Carver College of Medicine and in the College of Liberal Arts & Sciences. 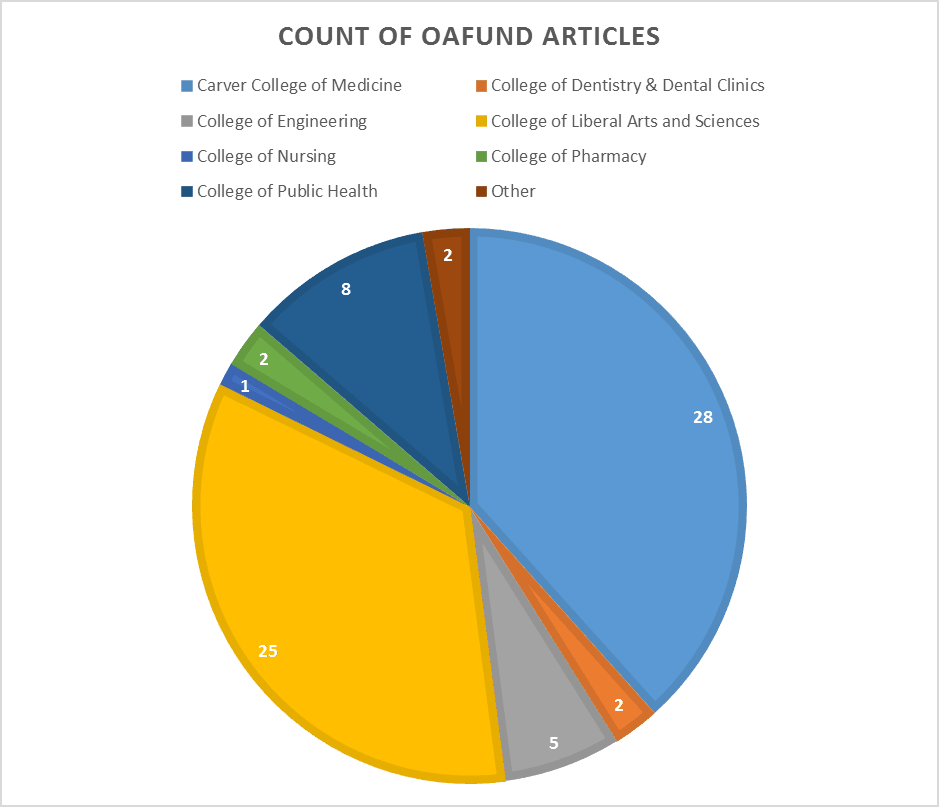 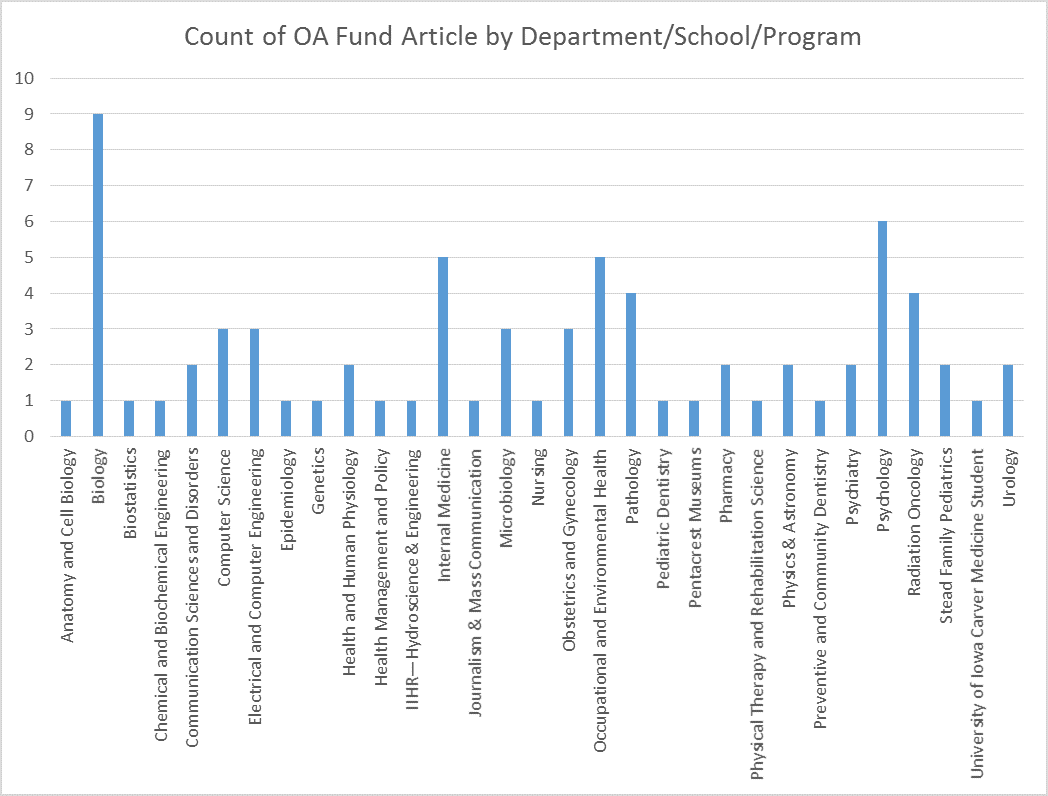 We are very happy to have been able to support open scholarship at the University of Iowa with this fund.

Here are some highlights from our digital collections for black history month.

These three books are available as free PDFs online. They were published in the University of Iowa Press Singular Lives series.

Born in 1913 in Collinsville, Illinois, Cecil Reed has lived all his life in the Midwest as a black man among whites. This self-styled fly in the buttermilk worked among whites with such skill and grace that they were barely aware of his existence—unless he wanted to get a bank loan or move into their neighborhood. Now, in his lively and optimistic autobiography, he speaks of his resilience throughout a life spent working peacefully but passionately for equality.

The Making of a Black Scholar: From Georgia to the Ivy League
Horace A. Porter

This captivating and illuminating book is a memoir of a young black man moving from rural Georgia to life as a student and teacher in the Ivy League as well as a history of the changes in American education that developed in response to the civil rights movement, the war in Vietnam, and affirmative action. Born in 1950, Horace Porter starts out in rural Georgia in a house that has neither electricity nor running water. In 1968, he leaves his home in Columbus, Georgia—thanks to an academic scholarship to Amherst College—and lands in an upper-class, mainly white world. Focusing on such experiences in his American education, Porter’s story is both unique and representative of his time.

The Making of a Black Scholar is structured around schools. Porter attends Georgia’s segregated black schools until he enters the privileged world of Amherst College. He graduates (spending one semester at Morehouse College) and moves on to graduate study at Yale. He starts his teaching career at Detroit’s Wayne State University and spends the 1980s at Dartmouth College and the 1990s at Stanford University.

Porter writes about working to establish the first black studies program at Amherst, the challenges of graduate study at Yale, the infamous Dartmouth Review, and his meetings with such writers and scholars as Ralph Ellison, Tillie Olsen, James Baldwin, and Henry Louis Gates, Jr. He ends by reflecting on an unforeseen move to the University of Iowa, which he ties into a return to the values of his childhood on a Georgia farm. In his success and the fulfillment of his academic aspirations, Porter represents an era, a generation, of possibility and achievement.

Philip Hubbard’s life story begins in 1921 in Macon, a county seat in the Bible Belt of north central Missouri, whose history as a former slave state permeated the culture of his childhood. When he was four his mother moved her family 140 miles north to Des Moines in search of the greater educational opportunity that Iowa offered African American students. In this recounting of the effects of that journey on the rest of his life, Phil Hubbard merges his private and public life and career into an affectionate, powerful, and important story. Hubbard graduated from the University of Iowa with a degree in electrical engineering in 1946; by 1954 he had received his Ph.D. in hydraulics. The College of Engineering extended a warm academic welcome, but nonacademic matters were totally different: Hubbard was ineligible for the housing and other amenities offered to white students. Intelligent, patient, keenly aware of discrimination yet willing to work from within the university system, he advanced from student to teacher to administrator, retiring in 1991 after decades of leadership in the classroom and the conference room. Hubbard’s major accomplishments included policies that focused on human rights; these policies transformed the makeup of students, faculty, and staff by seeking to eliminate discrimination based on race, religion, or other nonacademic factors and by substituting affirmative action for the traditional old-boy methods of selecting faculty and administrators. At the same time that he was advancing the cause of human rights and cultural diversity in education, his family was growing and thriving, and his descriptions of home life reveal one source of his strength and inspiration. The decades that Hubbard covers were vital in the evolution of the nation and its educational institutions. His dedication to the agenda of public higher education has always been matched by his sensitivity to the negative effects of discrimination and his gentle perseverance toward his goals of inclusion, acceptance, and fairness. His vivid personal and institutional story will prove valuable at this critical juncture in America’s racial history.

Content in Iowa Research Online was downloaded 131,084 times in January, a 19% increase over January 2015. The items receiving the most use were all theses:

These include theses as well as an article in Medieval Feminist Forum and a book review podcast.

If you are interested in all of our usage data for all series, we have links to the data on our website.

Our theses and dissertations are downloaded more than anything else in IRO. All together, they total close to 60% of the total downloads!

Almost one third of the total downloads come from our books, journals and magazines. Walt Whitman Quarterly Review and Medieval Feminist Forum receive the most use.

Our highest use items are

Congratulations to all the authors and journal editors!

While their total downloads was not the highest in IRO, these items had the greatest percentage increase of use in December compared with November.

These five items include a dissertation, a book from UI Press, an issue of 19th century magazine and a two journal articles. One of the journal articles come from our locally published journal, Poroi.

Our most downloaded items in December were very similar to the top items for November:

The twitter data stream had the most use by far.

We regularly look at usage information for Iowa Research Online. The software shows us the 10 items receiving the most downloads overall (total use is averaged out across how long the item has been publicly (freely) available), which allows new items to enter the top ten. However, this list tends to remain similar from month to month (and day to day). Looking at the number of downloads for a specific month sometimes highlights different items, but typically the most used items remain similar across months.

The most used items for November were:

Other than the first item, they all appear on the most popular papers list.

In order to find other items that are seeing an increase in their usage, we have begun comparing the use of an item with the previous month. These items may not have had the largest use overall, but the number of downloads was quite a bit higher in November than in October.

Congratulations to the authors of the works!

Items in Iowa Research Online have been downloaded more than four million times! This means that scholarship created by University of Iowa faculty, researchers and students is being read around the world. We crossed the three million mark in late January 2014; it is so very exciting to have had such an increase in just over nine months that we are dancing in our cubicles. 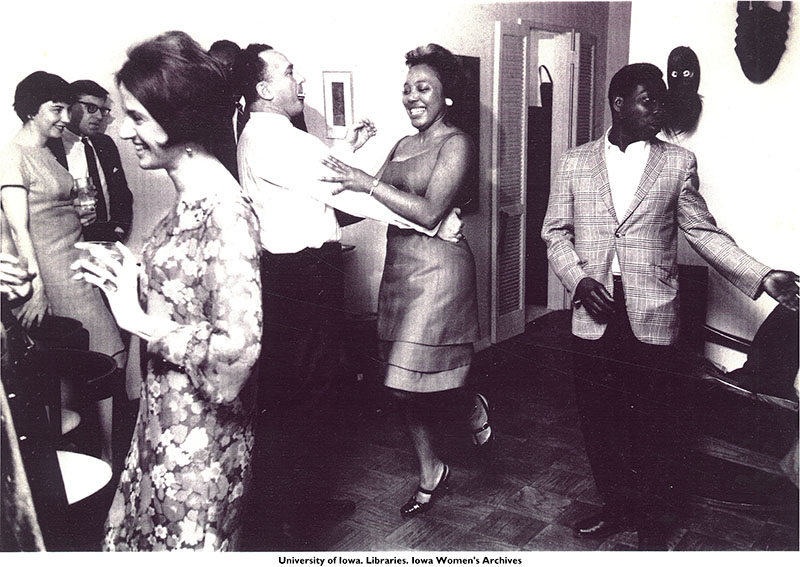 Our theses and dissertation make up over half the use, which is great evidence of the fantastic scholarship done by our graduates. The journals Walt Whitman Quarterly Review and Medieval Feminist Forum each have had two-three hundred thousand downloads. Congratulations to the editors of these journals for producing such quality publications.

If you would like your scholarship in Iowa Research Online, please contact your subject specialist for more information.