Preview of Covington’s forthcoming archive on Black girls in film

As a community engaged scholar, this fellowship has provided a space to value fellows’ interdisciplinary scholarship, professionalization from the Studio and explore the possibilities of how the digital humanities can assist and serve in the development of community needs that coincide with academic endeavors within the disciplines of African American Studies, Sociology and Film Studies.

At the beginning of the fellowship, I was able to connect with the Library of Congress, UCLA and the University of Indiana Bloomington to explore the film collections and archive of Black films. The archivists and librarians from across the country informed me that there was no specific archive of the database of Black youth films. Though each of the resources provided were extensive, it was encouraging to identify a “gap” in the digital space. It was clear that the database I was seeking is what I needed to create. In developing a dataset of over 100 Black youth films, the curated collection begins as a space to identify films featuring Black and African American girls as main characters in feature films.

I explored database options including, Omeka and Heurist, to serve as a general database. But each format did not allow for multiple data points to be viewed simultaneously in addition to user access and navigation. In my ongoing consultation with the Studio, I was able to begin the process of providing the database in the format of a digital timeline.

Through incorporating Atom I was able to begin transition of the dataset to a timeline that can be a utility for teachers, youth, filmmakers and scholars interested in Black youth films, specifically girls. The beginning of the database has started with the fellowship and will continue to be part of my academic scholarship.

Turning data sets into digital representations and collections that serve as resources for others is much of what I have learned in the Digital Fellowship. The power of collaborative work and engagement with communities needs allows for the digital humanities to supplement much the traditional parameters of traditional academic spaces taught in graduate school. The digital space allows for non-academics and community members to explore exhibits, the ongoing professional development to develop digital skills and the creation of visual context for scholarly work. 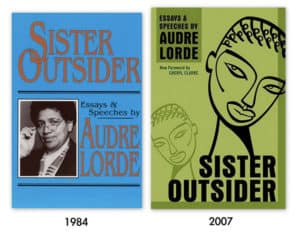 Coming to this fellowship during a time of social unrest due to a dual pandemic, of racial injustice and international health crisis, I asked myself: How can my work address injustice in the archive?

In exploring this terrain amidst a time in which anti-racism and social justice are now in the national lexicon, I witnessed much of what was said on the topic across institutions as empathic to understanding racial justice but there was a limited focus on policy and change to implement to support those most marginalized, specifically, within the academy.

In approaching the development of a database and researching current film archives, I found many of the mainstream archives housed in university and national libraries were just starting to challenge what Audre Lorde calls the “mythical norm.” In her seminal work, Sister Outsider, Lorde’s definition of the mythical norm challenges the assumption of normality which prioritizes straight, white, middle class and maleness. The book is essential in the Black Studies tradition and provides a framework for me to challenge the mythical norm in the archives. I began by exploring digital spaces that disrupt the perceived norm and create a space honoring Black people’s lives, perspectives and experiences.

Identifying the works of Dr. Stephanie Y. Evans and their curation of Black women’s narratives provided me with a place to understand Black digital spaces that can be created as sites of rebellion and supplement already standing scholarly work. This project is helpful in thinking about the manner in which my work over the summer can be developed while honoring a digital scholarly commitment to anti-racism.

Dr. Evans and other Black digital humanists’ works I discovered allowed for me to see the utility of a digital resources while also understanding how it is situated across the social sciences.

In approaching the development of an archive of Black youth centered films I consider the history that Black children are often not afforded childhoods as we have seen with the police murders of Aiyanna Stanley Jones, Trayvon Martin and Antwon Rose II. The rationale of this ongoing work is developing a space where Black children are recognized as such and their lives, fictionalized or not, are worthy of our attention. In this space, joy can outweigh pain, fantasy can be real, and their lives, real and otherwise, can be honored.

The development of a film database that honors Black children, specifically girls, will serve as a scholarly supplement to my current research on Black girls in film as well as a stand-alone resource for teachers, filmmakers, youth and their stakeholders. I view this work as an act of anti-racism in the academy, rooted in the tradition of African American Studies which encourages us to look at history and archives and the like with a critical lens to identify social injustice and develop interventions to create just archives.