In the year 925, a new governor of Egypt imposed taxes that previously did not affect the Christian clergy of monasteries. The head of a monastery known as Dayr al-Suryan (pictured below), or the Monastery of the Syrians, then went on a journey to Baghdad to attempt to appeal and remove the tax burden from the monks of Egypt. This abbot was named Moses of Nisibis, and during his years of travel, he brought back around 250 books in the Syriac language to be housed in the monastic library. These books were filled not only with diverse texts including translations of Aristotle, moral maxims attributed to Menander and Homer, local histories of Mesopotamian monasteries, and Biblical manuscripts, but also with notes from previous owners and scribes about where the books were made, who read them, and when they were sold. 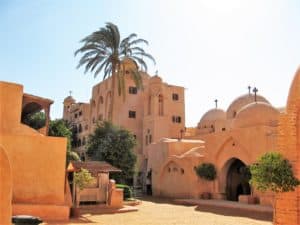 When we think of monks and nuns, we often think of cloistered people who do not leave their adopted home in pursuit of religious devotion. But the notes in these books hint at a lively trade in books and movement of monks all across Egypt, Syria, Turkey, Iraq, and Iran. Moses of Nisibis is just one example of how Christian monks who spoke and prayed in an Aramaic dialect known as Syriac (so named for its origin in the Syrian city of Edessa) visited new places and exchanged books and stories. When Moses deposited his library of over 200 books at Dayr al-Suryan in the 900s, he had no way of knowing that most of these texts would eventually be sold in bulk to the British Library, where librarians and scholars are now digitizing these texts for viewing by the public. But Moses did make a note in most of these texts as a reminder to the reader that he was the one responsible for their movement.

Other books from this collection tell different stories. Several of these manuscripts contain small notes from readers and bearers of the texts. A few even give us a glimpse into the lives of otherwise unknown historical figures. BL Add. 14,442 contains a copy of the Biblical books of Samuel. In the pages of this sacred text, we find a note from three brothers named Matthew, Abraham, and Theodore from the city of Tagrit that they owned this book at one point.

With these tantalizing pieces and courtesy of the diligent notes made by Syriac scribes, my goal this summer is to compile the geographic data from the British Library collection that tells the story of how these books were composed, traded, and read. Through mapping the known monasteries and regions, I am working to illustrate the surprisingly mobile lives of Syriac books. My work so far has been focused on turning the descriptive data of archival records into a table that can mark where these manuscripts were and when. From here, I will begin mapping both where these books were and when, with the goal of visualizing the migration of books across the Syriac world.