NASA has scheduled the first manned mission to Mars by 2030s. Millions of miles away, this group of astronauts will constitute a micro society. Women and men, most likely from different cultures, will have to live and work together in claustrophobic chambers for a long time.

To prepare for this experience, psychologists have long been studying groups in similar conditions – for example wintering crews in Antarctica, or volunteers participating in Mars habitat simulations. Existing research on mixed gender crews in isolated confined extreme (ICE) conditions shows that males and females have different experiences – for example, they report different stressors, different relations between crew members; females report more  unwanted sexual attention and harassment. Gender differences are usually explained by personality and situational factors; and social structure is left out of the equation.

But sociologists have shown that structural inequality and stereotyping, that shape societies at large, are imported into small group settings every time we interact. For example, in work groups we subconsciously stereotype others, and judge about their abilities based on their gender, race, ethnicity and other observable status characteristics. This happens both in newly formed, and in long term task groups – in latter, stereotypes keep influencing our decisions even if we are aware how well or poorly our teammates have performed in the past.

It is a self-fulfilling prophesy: we know who should be better at a task based on our stereotypical knowledge, and then we let them lead our group and contribute more to the task. But even if we know their actual abilities, stereotypical knowledge will continue to influence the formation of the status hierarchy in the group.

MDRS is a space analog facility in Utah owned and operated by a non-profit Mars Society. Each year, MDRS hosts an eight month field season for professional scientists and engineers as well as college students of all levels, in training for human operations specifically on Mars. Most missions are 2 weeks in duration. To this day, over 190 crews have conducted their research on the site over the course of 16 field seasons.

Most of the crews consist of six members, each of them are assigned the following roles: Commander, Executive Officer, Health and Safety Officer, Crew Biologist or Astrophysicist, Crew Geologist or Chief Engineer. These roles are consistent to most part across different crews. Each crew member has to file daily logs and reports; most reports from previous crews have been archived and available online through the MDRS website. In addition to logs, members of each crew post a short biography of themselves, usually including their education, occupation and other information relevant to their participation in a simulation.

Extravehicular activities (EVAs), or simulated spacewalks, are a crucial part of Mars habitat simulation. Thus it is likely that crew members who are seen as more important to the mission, will go on more simulated spacewalks. If we know who went on spacewalks with whom and who did it more often, then we can have a glimpse (albeit imperfect) to this crew’s status hierarchy.

To get there, I will analyze daily logs and biographic entries from a random sample of crews to see whether males or females are more central to the mission success.

I will use social network analysis to map status hierarchy in crews. Each node will represent a crew member, and ties between them will show how often they have worked together. I will use centrality measures to determine the most central person (or the person who has the highest in-group status). Later, I will use logistic regression models to determine whether males or females are more likely to be the most central, controlling for their role in the crew and other sociodemographic variables.

Summer at the Studio

A picture is worth a thousand words. When I started thinking about this project, I instantly knew that I need attractive visuals to accompany it.

There is a simple way to do it. Two graphs that show the same crew, one coded by gender, and the other by different crew roles. In both, thicker lines indicate that these individuals have worked together more often. In the left, black color marks males. It shows that the most central person is a male. In the right, the same crew is coded by their roles. The central node is the engineer. 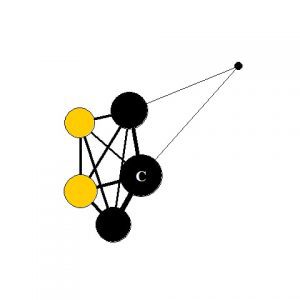 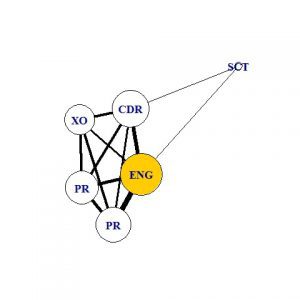 It is possible to detect some interaction patterns looking at these graphs side by side. But I want to visually summarize the data better. As one of the Studio fellows, this summer I will design and create a prototype of an animated interactive network graph (using simulated data) for the future use. This graph will:

I think I can do all of it in R/ R Shiny, with some help of Java-based ndtv-d3 network animation player. Another route would be to use d3.js library, but I am not as comfortable in Java as I am in R. But I will keep an open mind and give you updates as I go, either here or on my blog.